A robotic repair system is being sent underneath Western Road this week to repair gas pipes along the busy Brighton road. 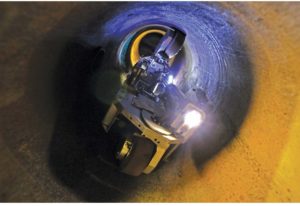 Southern Gas Networks (SGN) has spent more than £0.5million on the project, which uses a system called Cisbot to seal joints in gas mains underneath the road.

For the next six weeks, its engineers will be working in the city centre between Crown Street and North Street, but as Cisbot can travel about 170 metres in each direction from a single excavation, there won’t be any long trenches dug up to access the pipes.

However, two bus stops on the westbound carriageway outside CHurchill Square will be suspended while the works continue, and manually controlled temporary traffic lights in Western Road at its junction with Regent Hill will be in operation.

Meanwhile, the bus company is preparing diversions for when another utility company digs up the road in autumn, when Southern Water resurfaces North Street.

SGN Engineering Manager Casey Everitt said: “By using our innovative Cisbot robot to seal the joints along the inside of our gas main, we’re able to minimise disruption for road users and residents while we upgrade our network.

“The robot works underground and upgrades the gas main from the inside, which means we don’t require long trenches along the road to access the pipe. Instead, we can upgrade a large section of our network from just one excavation.

“Less digging means we can complete this essential work more quickly. What’s more, the robot works inside the live gas pipe, so there’s no need to interrupt gas supplies as we work.”

Councillor Gill Mitchell, Chair of the Transport Committee at Brighton and Hove City Council, said: “Reducing the impact of roadworks is a priority for us, so our traffic team have been liaising closely with SGN. The robot looks like a smart way of working in our busiest streets.

“This is extra important this year as Southern Water will also be relaying the surface of North Street next autumn so we must make every effort to keep transport systems moving during these essential works.”

Speaking about the North Street roadworks, which are due to start for two months in the autumn, Brighton and Hove Buses managing director Martin Harris said: “I want to reassure bus users in the city that Brighton & Hove Buses is working with the council to plan our arrangements for diversions so services are disrupted as little as possible and the impact to passenger journeys is minimised.

“We are naturally concerned about any disruption to passengers but understand this is essential work and appreciate the project is relatively short and well-timed.

“We’ll announce details of diversions in due course.”

The roadworks are being carried out because the road surface, laid down after it was dug up ten years ago to replace 400m of Victorian water mains, is already crumbling.

The works will see the northern half of the roadway along a 400 metre stretch of North Street, south of the Jubilee Clock Tower, strengthened and resurfaced.