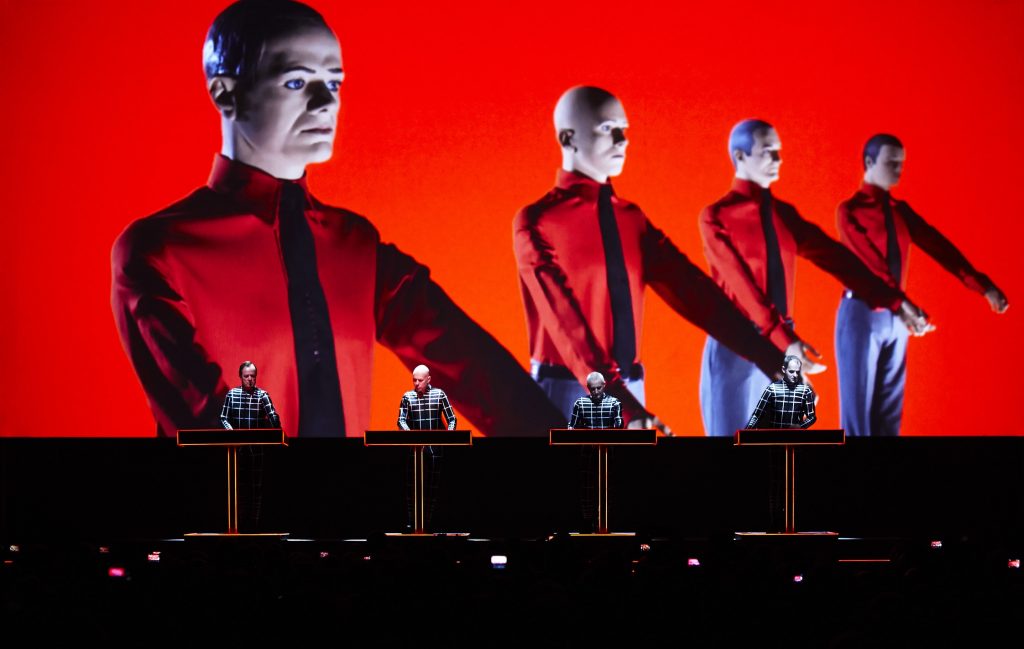 Kraftwerk live: They are performing Robots

After instantly selling out their 12 date UK tour within a matter of minutes (just like the Tate Modern Turbine Hall residency four years ago), Electro pioneers Kraftwerk then confirmed an additional 3-D concert at the Brighton Centre on Wednesday 7th June. They have stated that the Kraftwerk 3-D concerts are a bringing together of music and performance art and are a true “Gesamtkunstwerk – a total work of art.”

So we are going to look into their previous visits, but first some background on these world-wide legends.

The multi-media project Kraftwerk was started in 1970 by Ralf Hütter and Florian Schneider. They set up their electronic Kling Klang Studio in Düsseldorf, Germany, where they conceived and produced all Kraftwerk albums. By the mid 1970’s Kraftwerk had achieved international recognition for their revolutionary electronic sound scapes’ and their musical experimentation with robotics and other technical innovations. With their visions of the future, Kraftwerk created the soundtrack for the digital age of the 21st century.

Their compositions, using innovative techniques, synthetic voices and computerised rhythms, have had a major international influence across an entire range of music genres: from Electro to Hip Hop, from Techno to SynthPop. In their live performances, Kraftwerk – Ralf Hütter, Henning Schmitz, Fritz Hilpert, Falk Grieffenhagen – illustrate their belief in the respective contributions of both man and machine.

Having received numerous of accolades over the years, Ralf Hütter and his former partner were honoured with the Grammy Lifetime Achievement Award in 2014.

We believe that the 7th June concert will be only their third appearance in the city, after an absence of 36 years!

Amazingly, it should have actually been their fourth time in Brighton, but alas their 1978 Man Machine tour was cancelled. I was personally really upset about this as it was to be my very first ever concert. I can remember taking my ticket back to the Dome box office in New Road and asking the lady behind the counter why it was cancelled as she handed me my money back. Her reply is engrained on my brain ‘lack of ticket sales’ she uttered. Can you ever imagine that! (So my first concert became The Buzzcocks at the Top Rank and that was literally a riot!). 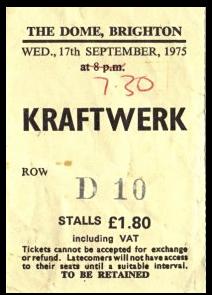 Kraftwerk’s first appearance in Brighton was at the Dome on 17th September 1975, where they were showcasing their Autobahn and Radio-Activity albums, as can be seen by their setlist: Kling Klang, Tongebirge, Tanzmusik, Ruckzuck, Kometenmelodie 1, Kometenmelodie 2, Autobahn, Mitternacht, Showroom Dummies. 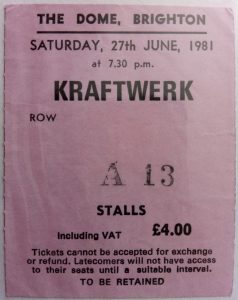 They returned to the Brighton Dome six years later on 27th June 1981 and thankfully I had secured myself a front row ticket. The crowds didn’t stay in their seats for that long and my fondest memory of the concert was when they returned for their first encore and they had wired up their four pocket calculators to their Kling Klang studio behind them and I was standing in front of Florian and all the band members let the fans have a go on them and I had a go on Florian’s – pure magic! The setlist that night was: Numbers, Computer World, Home Computer, Computer Love, The Model, Neon Lights, Radioactivity, The Voice of Energy, Uranium, Ohm Sweet Ohm, Autobahn, The Hall of Mirrors, Showroom Dummies, Trans-Europe Express, Metal on Metal, Pocket Calculator, The Robots, It’s More Fun to Compute. The last track was a truly brilliant up-tempo dance version of the tune and which I feel they should have released.

I can remember hanging a giant poster (in red, black and white) I got from the event on my bedroom wall. It stayed there for years!

So here we are 36 years older and still enjoying their music and looking forward to their imminent 3-D album release, even if it is the same old songs. Something new would be nice, but would it be as good? They performed some new tracks when I saw them at Tribal Gathering in 1997, but they never got released.

So I wonder what the sold out Brighton Centre 7th June concert setlist will be? Let’s wait and see!