The freedom of the city will be conferred on Brighton and Hove Albion manager Chris Hughton and the football club’s chairman Tony Bloom at Brighton Town Hall tomorrow (Thursday 18 May). 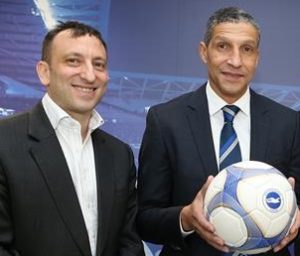 The civic honour recognises the Seagulls’ success in winning promotion to the Premier League.

A report to councillors said: “Tony Bloom has been the chairman of Brighton and Hove Albion since 2009, succeeding Dick Knight, and has invested £93 million in the development of the club’s new ground, the American Express Community Stadium, as well as a new training ground and facilities in Lancing.

“He has been a long-term fan of the club and grew up in Brighton.

“Chris Hughton is the manager of the first team and having been appointed midway through the 2014-15 season, secured the club’s safety in the Championship.

“In the 2015-16 season he led the team to third place and narrowly missed promotion before leading the team to promotion to the Premier League in the 2016-17 season and the club’s return to top flight football.

“The proposals to honour both Mr Bloom and Mr Hughton are in recognition of contributions made by them and all those involved with the club which has led to its success and to the benefit of the city.”

Former Albion chairman Dick Knight, credited with rescuing the club in the late 1990s, was made an honorary freeman four years ago.

The ceremony tomorrow will take place at a special meeting of Brighton and Hove City Council. It follows a civic reception for the club after the promotion parade on Sunday (14 May).