This has been a week full of tragedy – the fire at Grenfell Tower. There has been an appalling loss of life and acts of amazing heroism.

This was not a natural disaster. It was avoidable.

Everyone, rightly, is praising the emergency services. Firefighters going into a burning building. Their bravery is beyond words.

But it was not so brave to close the three fire stations nearest Grenfell Tower.

There are 5,000 fewer fire fighters than there were five years ago. There has been a 25 per cent reduction in fire prevention visits.

There has also been a 15 per cent increase in the past year in the number of fire-related deaths in the UK, from 264 to 303.

If you put money before lives, people die.

The former Housing Minister, Brandon Lewis, explained in 2014 why the government was not insisting on sprinklers in tall buildings: “The cost of fitting a fire sprinkler system may affect housebuilding – something we want to encourage.”

In other words, sprinklers would reduce profits.

The government’s regulator, the Homes and Communities Agency, focuses its regulatory intervention on the financial viability of housing associations. That was not its decision. It was the decision of government. It was a decision made to protect the interests of the financial institutions. 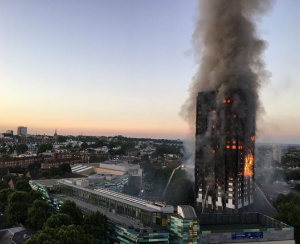 The Lakanal House fire in London in 2009 killed six people when a fire developed and spread through a number of flats in a 12-storey building.

A report containing a range of recommendations was published after that fire. It included a recommendation to review building regulations.

Yet successive ministers have sat on the report and earlier this year the then Housing Minister, Gavin Barwell, further delayed that review. (Gavin Barwell lost his seat on Thursday 8 June but was appointed two days later as Theresa May’s chief of staff at 10 Downing Street.)

Some 73 Members of Parliament who are private landlords voted against making private rented properties fit for human habitation, including the former Prime Minister David Cameron and the newly appointed Minister for Fire Nick Hurd.

There are questions to be answered by providers and particularly by government about safety in social housing and in tall buildings.

I am sorry if I offend … actually, I am not sorry.

Those whose policies and spending cuts lead to people dying, they should be sorry and they should apologise. Some should resign.

Andy Winter is a blogger and chief executive of Brighton Housing Trust (BHT).