The Brighton i360 has been awarded one of the leading architectural prizes in the country.

The Brighton seafront attraction, which opened last summer, is one of 49 buildings to receive a 2017 RIBA National Award for architectural excellence. 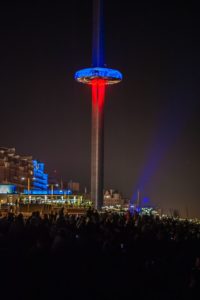 i360 fireworks – Picture courtesy of British Airways i360 / Julia Claxton

The RIBA (Royal Institute of British Architects) president Jane Duncan said: “I am delighted to see such confident, innovative and ambitious architecture delivered in such challenging times.”

The shortlist for the Stirling Prize, RIBA’s prestigious accolade for Britain’s best building of the year, will be drawn from the list of 49 RIBA National Award-winning projects.

The RIBA National Awards are given to buildings regarded as making “significant contributions to architecture”.

The jury praised the i360, saying that it was “impressed by the extraordinary innovation and originality demonstrated by this scheme and the heroic collaboration between architect and engineer”.

There was, the jury said, “a sense of delight in the way the pod emerges from the bowels of the earth which can be enjoyed by passers-by.”

“This award is a testament to the close partnership between architects, engineers, the West Pier Trust, Brighton and Hove City Council, Coast to Capital LEP (Local Enterprise Partnership) and the Brighton i360 company – all working together to drive regeneration and economic progress in the city.”

Last month, the i360 was awarded a 2017 RIBA South East Award as well as being honoured with three South East RICS Awards, including Project of the Year.