This evenings event was really value for money as the Brighton based Sugar-Free Records put on four decent bands on at the Hope & Ruin in Queens Road, Brighton for just £5 in advance or £6 on the door.

It was a double-header headline with Nervus and the band I particularly wanted to see called the Kamikaze Girls. Also on tonight’s bill were Larkhill and Haters. 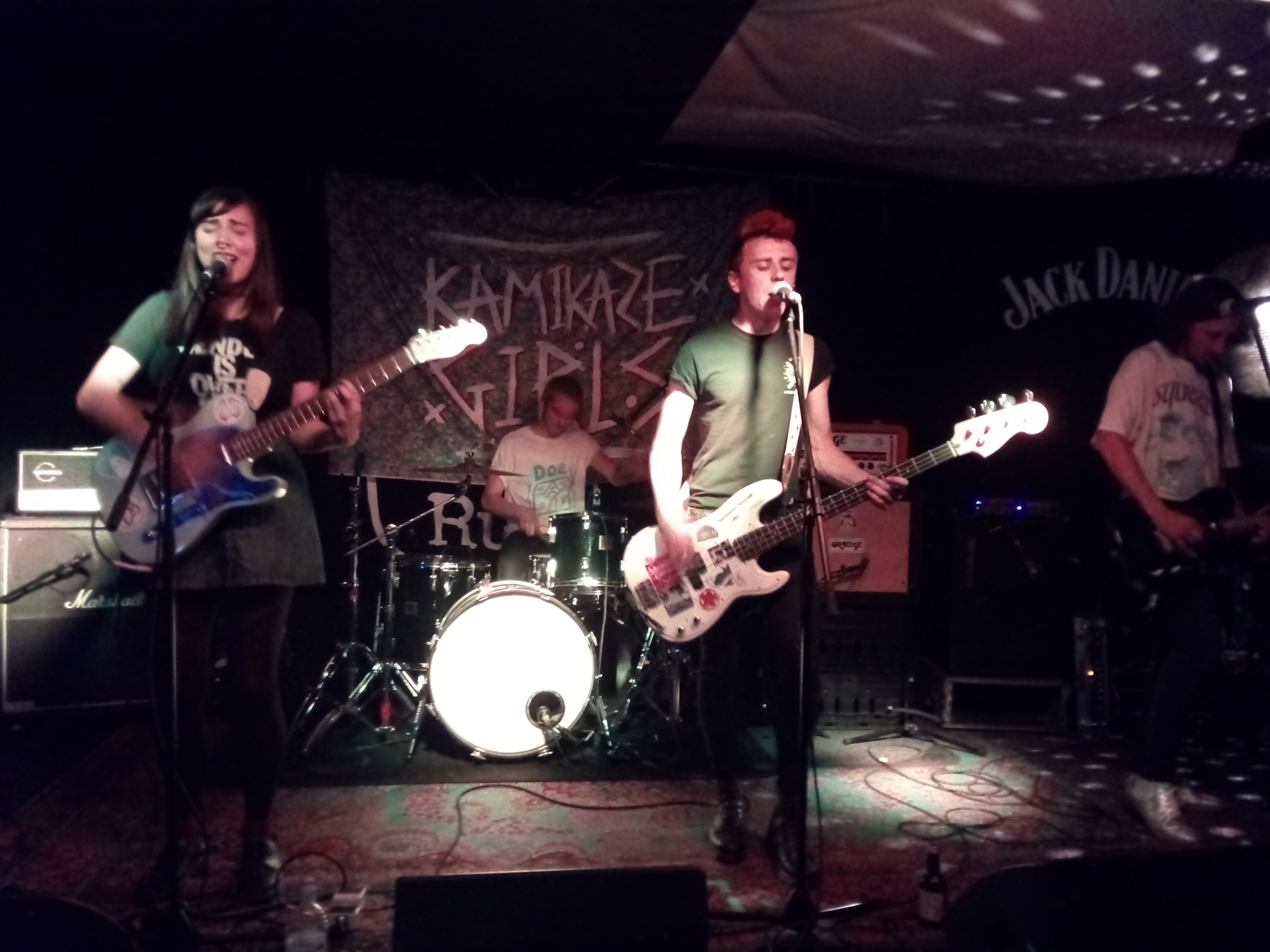 The evening was enjoyed by the eclectic and enthusiastic crowd and first up were Brighton’s very own power pop 4 piece combo Haters or as they refer to themselves as trashy pop-punk. This alas was to be drummer Jason’s farewell concert as he has several other commitments, so if you are a Brighton area based drummer, I am sure that Jo (guitar and vocals), Tom (bass and vocals) and Gabriel (guitar) would love to hear from you. Tonight they played an enjoyable set that went down rather well and I couldn’t help noticing that Tom has changed the colour of his hair to bright red since I last spoke to him, very striking.

Indie punks Haters will be releasing their new 4 track limited edition (300 copies) pink vinyl EP entitled Chronic on 7th July via Everything Sucks Music and to celebrate this they are playing a gig at the Montague Arms on Friday 11th August and are being supported by the mildly noisy collective known as Latchstring. 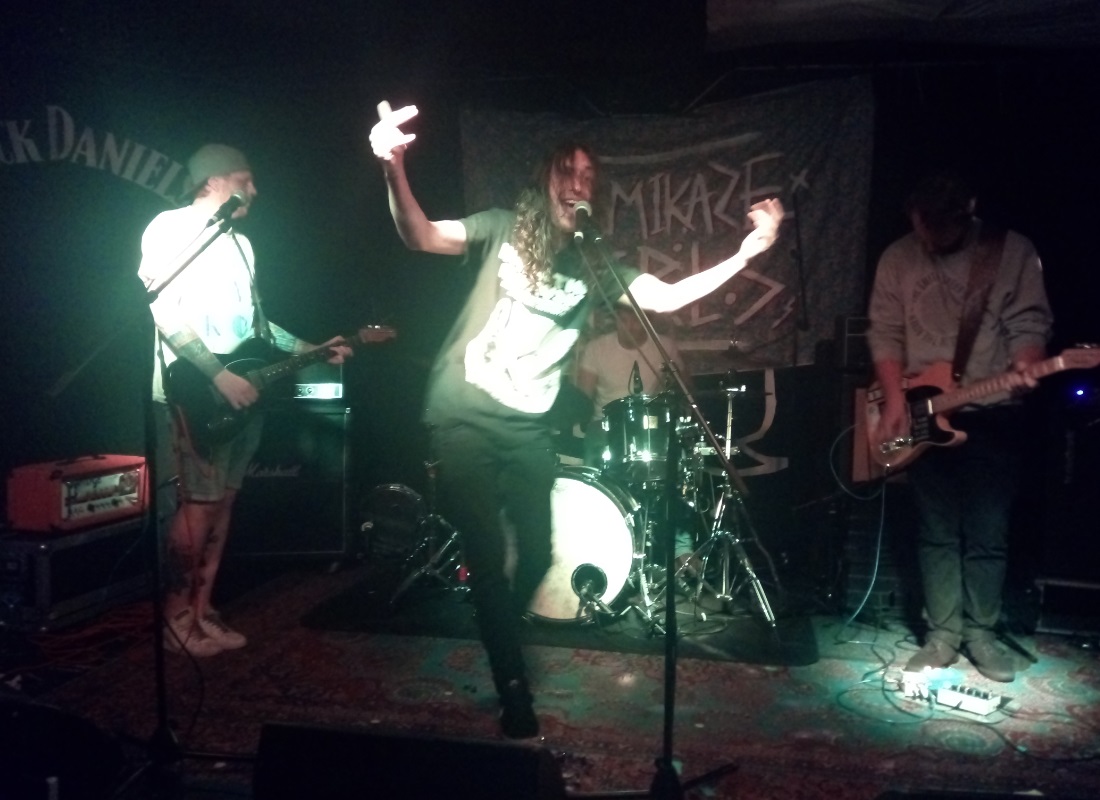 Next up were 5-piece band called Larkhill, which is a collective by Misael Trujillo, who is originally from the Canary Islands, and it featured tonight, Chris Childs, Lee O’Connor, Harry Gibbs and Alex McCudden. They have a forthcoming EP coming out that was recorded in Barcelona as that’s where Misael is based quite a bit of the time.

Larkhill refer to themselves as emotional punk or anthemic punk rock, but to be honest they were just normal rock to me. But they were having a great time, especially Misael who was very pleased to be able to stand up in front of people and to sing his compositions, something he told us that he was previously unable to do when he was younger, due to his indoctrinated religious upbringing. The band on the forthcoming release features members of other bands – Great Cynics, Sibling, Giants and Brightr and they are based in Brighton, London and the aforementioned Barcelona. 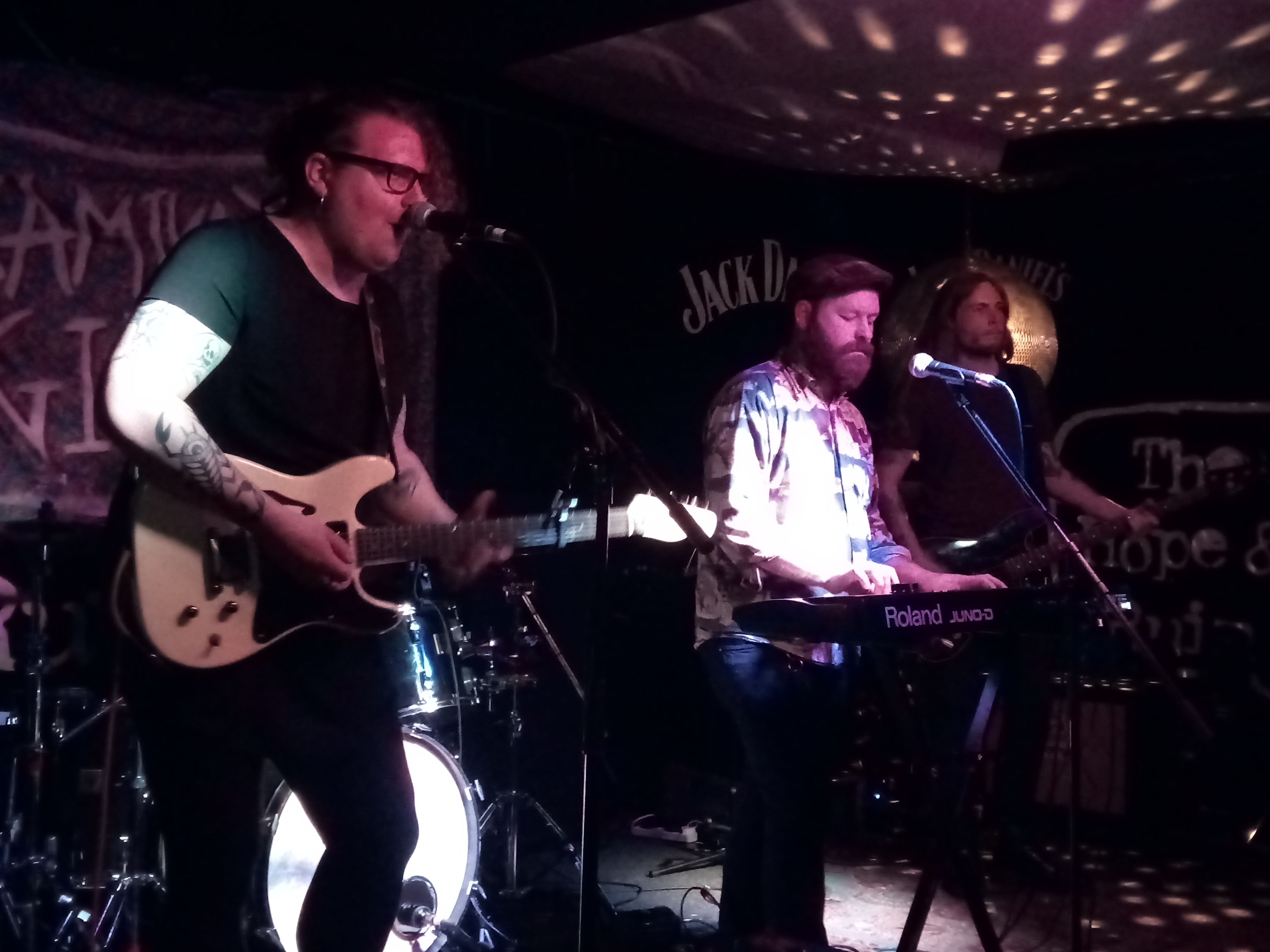 Tonight’s co-supporting act were Nervus from Watford and they refer to themselves as indie-punk rock that sound like the wonderful amalgamation of Alkaline Trio and Into It Over It, but to me they were more sort of Glastonbury rock, if you catch my drift. The band has four members, Em Foster (who in an national interview said that one is a non-binary trans woman), Paul Etienne, Karl Woods and Jack Kenny. The band started as a bedroom project and saw guitarist and vocalist Em create and write music to help cope overcome additions in various different forms as well as working through their own gender identity. The debut album entitled Permanent Rainbow is out now and they have just signed to the Oxford based Big Scary Monsters label, who formed in 2001. Tonight their set was tight and would make a good addition to the Great Escape 2018 – hint hint. 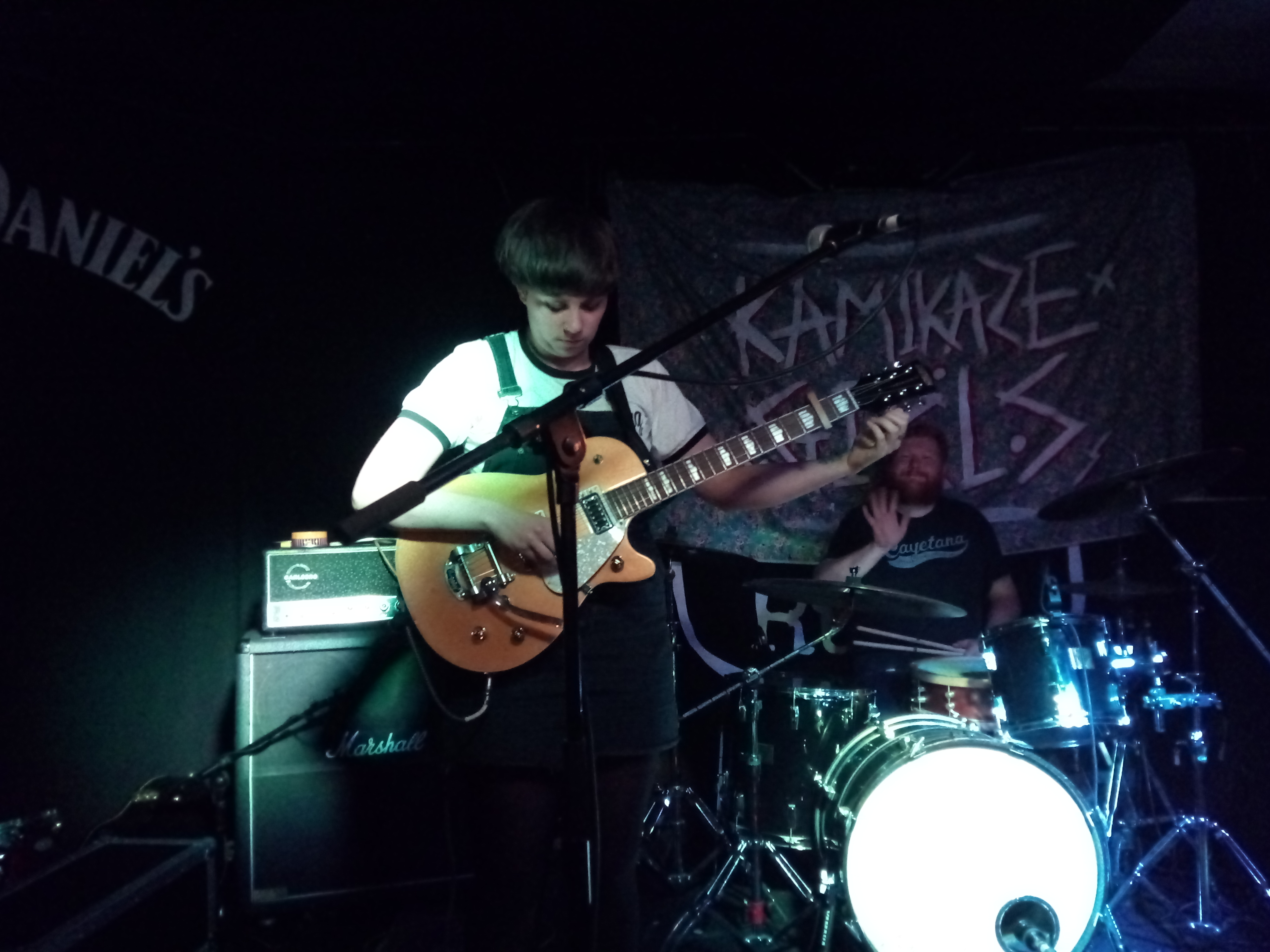 The final band tonight were the Kamikaze Girls, who are already signed to Big Scary Monsters label and released their debut album on 9th June entitled Seafoam. Despite their name they are actually a boy-girl duo of singer and guitarist Lucinda Livingstone and drummer Conor Dawson. They are Leeds and London based and they write songs that are honest and open about Lucinda’s experiences with anxiety and depression as well as addiction and the band sure has been her therapy as they are getting better and better and now they have embarked on their first ever top billing 12 date tour.

The band’s raw live shows, like tonight’s, have become synonymous with the DIY punk scene. Lucinda just loves to scream out her vocals and enjoys the use of her effects pedals, which are much cherished by the shoegaze brigade. So tonight featured tracks from the new album and was presented with obscure vocals, distortion, guitar feedback and heavy drums – most enjoyable, although older releases were alas ignored, probably due to timing as having four bands on a single night means no encores and shorter sets. But I have to say it was a million times better than the 4 bands I saw at the Hope & Ruin a few weeks ago.

To hear what the Kamikaze Girls sound like visit: https://bsmrocks.bandcamp.com/album/seafoam and to get in contact go to: www.facebook.com/kamikazegirlsuk 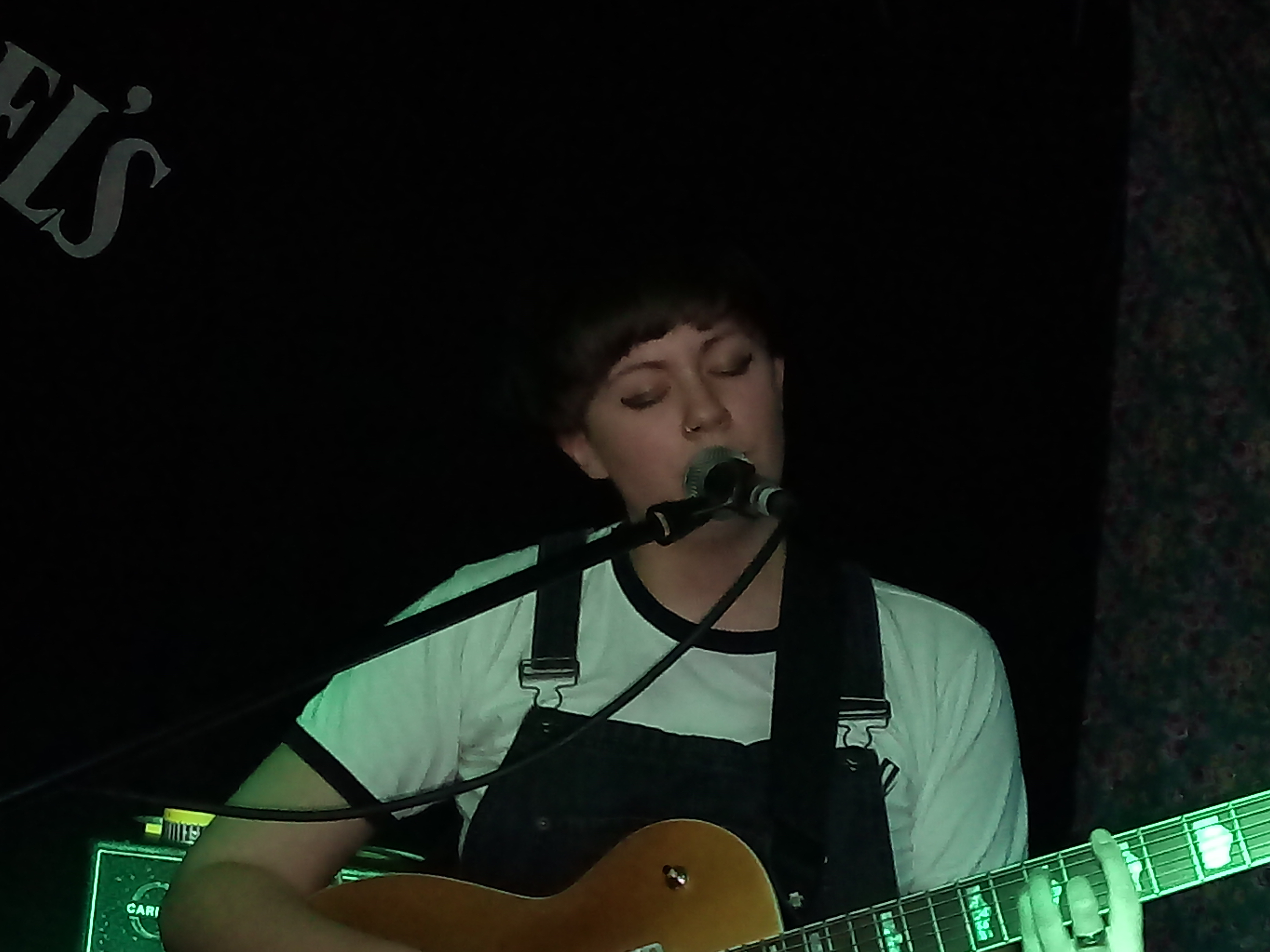 Lucinda Livingstone of the Kamikaze Girls having a rare quiet moment