A “sob story” fraudster woman has been banned from going up to passers-by in Brighton and Hove and asking them for money.

Andrea Thorne repeatedly told people that her car had broken down and pretended to need bus or train fare to get home. 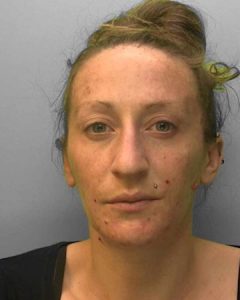 Thorne, 31, of Percival Terrace, Brighton, admitted four fraud offences and a charge of shoplifting when she appeared before Brighton magistrates on Friday (23 June).

She was sentenced to 16 weeks in prison suspended for two years. She was also ordered to pay compensation to the four victims of fraud, amounting to £55.

She was also given a two-year Criminal Behaviour Order (CBO) which bans her from approaching people in a public place and asking them for money.

One victim who did not want to be named said: “I was approached by a distraught woman, apologising and saying her car had broken down and she needed some money to get the bus to the hospital to see her sick child.

“I willingly gave her the money. A short time later, I saw her having the exact same conversation with someone else.

“I wasn’t even angry at first. I felt so stupid that I had fallen for this scam and handed over money, even giving a little bit extra to help her out.

“I always felt worldly wise so I was somewhat embarrassed that I had believed her story. It upsets me that she uses a very heart wrenching story to ‘mug’ people who are ultimately trying to be a good Samaritan and help someone out.”

PC Kevin Michnowicz said: “If Thorne is seen doing this, she is liable for arrest after breaching her CBO and she could be sent to prison.

“She has approached members of the public, with stories such as her car has broken down and she needs to see her son in hospital or take him to hospital and could she borrow some money from them which she will pay back.

“Supposedly, she takes mobile phone details with the intention of contacting the ‘victim’ the following day to arrange how to return the money but never does.

“If you see Thorne asking people for money in the city or you are approached by her, please contact us.”