Brighton and Hove mayor Mo Marsh marked the first anniversary of the i360 at a reception on Friday evening (4 August). 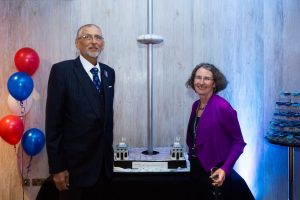 Speaking as a governor of two schools, she said: “In the first year of operations you have given 39,000 free tickets to the city’s children, one for every child in a state school in Brighton and Hove, and that makes me very proud indeed.”

She also said: “Tourism is really important to the economy of Brighton and Hove and the British Airways i360 is bringing visitors from all over the world.”

Brighton and Hove City Council chief executive Geoff Raw also spoke at the event, saying: “What’s fantastic about the British Airways i360 is that it’s a beacon for Brighton and a real positive statement of confidence that we are a place which continues to try to get international profile and bring investment into the city.”

There were also speeches by David Marks, chairman and architect of the i360, and the new executive director Steve Bax.

The Brighton Gay Men’s Chorus performed at the event which included a specially designed i360 birthday cake made by Brighton Cakes, complete with tower, pod and two toll booths. 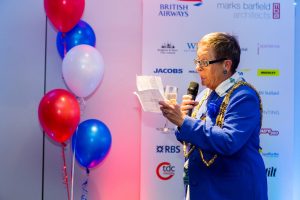 The i360 attracted about 500,000 visitors in its first year – below target but comfortably above the number needed to pay back its borrowings.

The council has not only received its annual £1 million interest payment from the i360 but it also received 1 per cent of the proceeds of ticket sales. 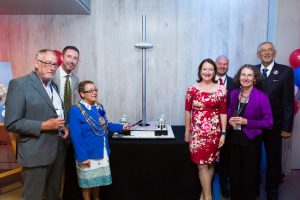 Last month the council said that it had earmarked £1.1 million of the money from the i360 to help fund work on the Madeira Terraces, east of the Palace Pier.

Both the council and i360 were at pains to reiterate that no council tax revenue was being spent on the attraction.