Blondie are playing the Brighton Centre – grab your tickets before they are all gone! 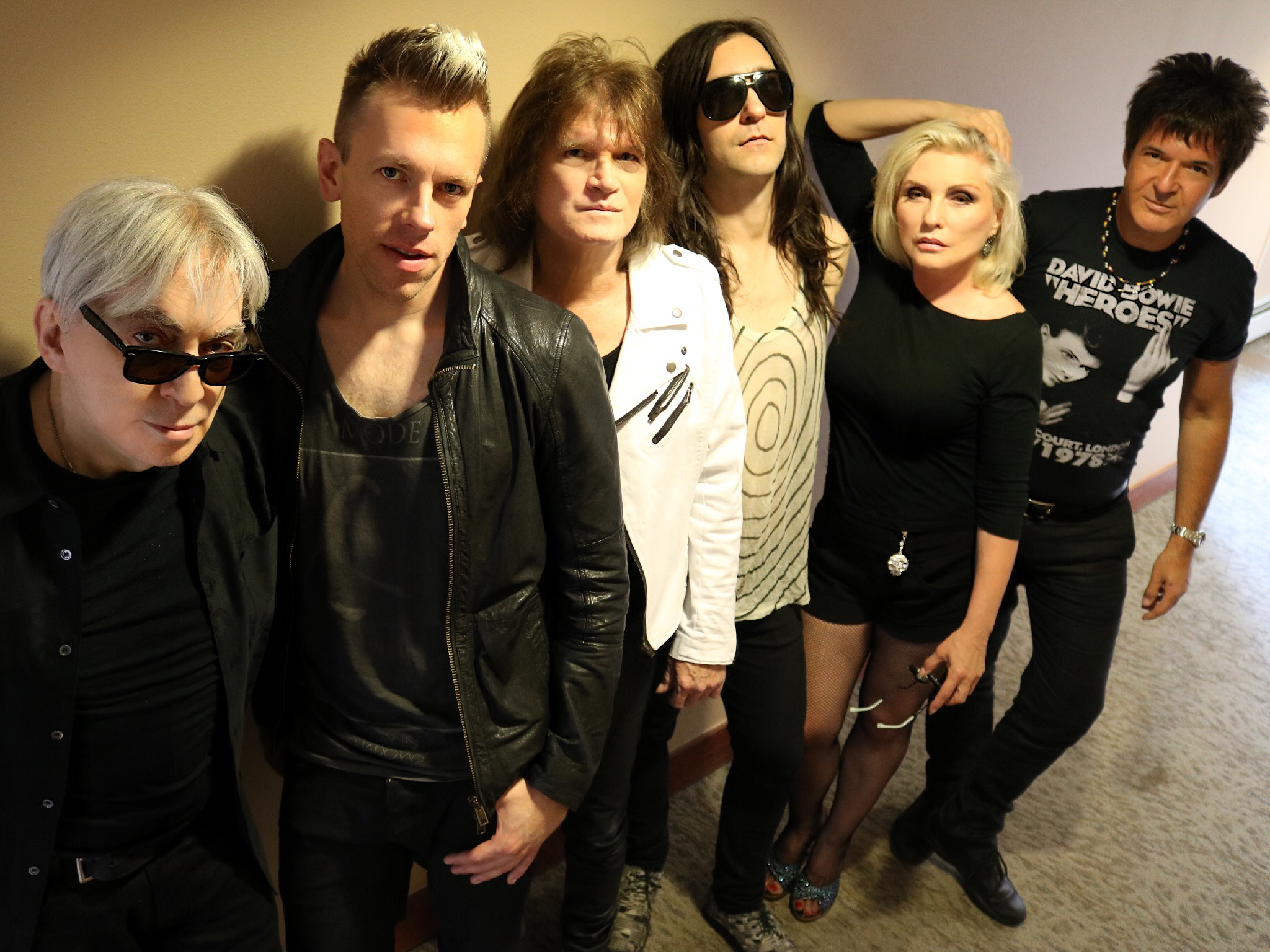 Last month, in the midst of a landmark year for the music icons, Blondie announced their major UK tour for November 2017. Due to incredible demand, the New York legends have added further shows in Nottingham, Brighton and Cardiff. Tickets go on sale this Friday (August 11th) at 9am.

Blondie will also be performing in Manchester,Birmingham, Glasgow and London this November. Manchester sold out within 24 hours with the O2 Brixton Academy following quickly, triggering a second date to be added at the prestigious London Venue.

The band’s already legendary 11th studio album, Pollinator (released May 5th on BMG), soared to Number 4 in the UK charts, making it the group’s first Top 5 entry in over 18 years.

And they are proving that the Blondie live show is an still an experience in itself, with the classic hits like ‘Heart Of Glass’, ‘Atomic’, ‘Tide Is High’, ‘Maria’, ‘Sunday Girl’, ‘Rapture’ and ‘Call Me’ naturally blending with Pollinator’s treasure trove of new songs including singles ‘Too Much’, ‘Long Time’ and ‘Fun.’

This year Blondie have toured Australia and New Zealand (April 2017) and are currently playing a sold out summer tour across the US and Canada with Garbage that ends this week in Dallas, TX. Rolling Stone praised their New York show “Blondie deliver timeless pop with an edge”.

In celebration of the release of Pollinator on May 5th, the band returned to the iconic Roundhouse in London for a triumphant show, receiving an ecstatic reception from fans and critics alike. The show sold out in 30 minutes.

The Guardian noted that it “combined sing-along classics with compelling new material” and the Daily Telegraph applauded, “A voice and melodies untouched by time.”

The band also brought audiences a taste of Pollinator with stunning live performances on ‘Later… with Jools Holland’ (BBC Two), ‘The One Show’ (BBC One), ‘The Chris Evans Breakfast Show’ (BBC Radio 2) and Tonight At The London Palladium (ITV).

Blondie played a major show in the UK at Barclaycard presents British Summer Time Hyde Park as main support to Phil Collins on June 30th and headlined at the Eden Project in Cornwall on June 23rd, where they launched their ‘BEE Connected’ campaign, using Pollinator to raise awareness of the decline of the bee population.

In conjunction with this campaign, fans can help make a difference by purchasing help special limited edition special limited edition “Pollinator/Save The Bees” t-shirts – the net proceeds of which will go directly to help raise awareness of the decline in the bee population by promoting organisations dedicated to conserving and improving the health of pollinators through education, consumer empowerment and political activation.

Visit Blondie’s ‘BEE Connected’ home page (http://www.blondie.net/beeconnected/) to purchase a t-shirt, learn more about incredible organisations they are partnering with (Pollinator Partnership, Friends of the Earth and Greenpeace) and find out all the ways to get involved.

The band’s next UK performance will take place at BBC Radio 2 Live in Hyde Park on Sunday September 10th.

“A cast stretching from Johnny Marr to Sia to Charli XCX and the Strokes’ Nick Valensi have helped recreate Blondie’s classic late-1970s band sound, albeit with a modern sheen. ★★★★” The Guardian

“The music industry is a hard coal-face to chip away at, let alone to lead. But Debbie and Chris have done just that. Pollinator is joyful, raucous, full of bangers.” BEAT

“‘Pollinator’ isn’t so much a retreat into well-worn climes as a renewal of the primary factors in what makes a band a band.” Clash

“Pollinator is a smart move: a new album that sounds enough like an old album to appease the partisans, but which has Charli XCX among its au courant contributors. All bases are covered…★★★★” Q Magazine

“The whole thing is given a neat completeness by John Congleton’s slick, electro-rock production.” MOJO

“Deborah Harry’s voice has rarely sounded better, perhaps energised by material worthy to stand alongside her brightest back pages.” Uncut

“New Wave legends rediscover their mojo on all-star 11th album.” Classic Rock “Pollinator unfurls some of the most resonant music Blondie have recorded during their second phase.” Record Collector

“It succeeds in not trying to outshine the band’s history, but in adding to it.” DIY

The last album recorded at New York’s famed recording studio, The Magic Shop prior to its closure, Pollinator is a riot of sound and musical colour; its 11 tracks represent the continuation of a 40+ year musical conversation that Blondie started.

Blondie’s classic writing duo of Chris Stein and Debbie Harry are at the heart of Pollinator’s creation – with “Doom Or Destiny” and “Love Level”, while keyboardist Matt Katz-Bohen’s two tracks (“Already Naked” / “Too Much”) prove the band continues to evolve almost song by song. Blondie’s founding drummer Clem Burke provides the unmistakably thrilling propulsion throughout.

And Chris Stein’s fascination with modern culture sees him mine a song from Adam Johnston aka an Unkindness (“Fragments”), first heard as a sample on the Vancouver based indie artist’s YouTube movie reviews.

Producer John Congleton (St. Vincent, John Grant, War On Drugs, David Byrne) brought the band into the studio to record live, capturing the essence of one of the founders of punk rock, a genre that defined his life.

The Smiths’ Johnny Marr, an old friend and admirer writes “My Monster” and joins the band on guitar, while Dev Hynes (Blood Orange, Lightspeed Champion) cements an enduring partnership with Blondie by channelling shards of “Heart Of Glass” into the irresistible “Long Time”.

Along the way, Joan Jett and Laurie Anderson make studio appearances (“Doom or Destiny”) along with The Gregory Brothers (“When I Gave Up On You”).

“Their material is part of us and we are part of them”, says frontwoman Debbie Harry of their co-writers, all of whom were influenced by her band in the first place, “It’s a celebration of recycling!”

Sounding more vital and essential then ever, Pollinator is a Blondie record for 2017 that stands alongside any in their extraordinary career.

Among their hits is the groundbreaking rock-disco hybrid “Heart of Glass” the equally influential hip-hop fantasia “Rapture” the stalker-love song “One Way Or Another” and the lilting calypso “The Tide Is High.” It’s a thrilling journey back to when Blondie pushed punk onto the dance floor and introduced a wider audience to hip-hop sounds, all the while building a catalogue of enduring hits along the way.

For the last four decades, Blondie has become and still remains a true global icon; one whose influence both shaped and continues to inform the worlds of music, fashion and art. From an irreverent Lower East Side punk outfit to bona fide international ambassadors of New York cool, Blondie will forever be synonymous with that punk spirit that lives somewhere in all of us. Their chart-topping success, fearless spirit and rare longevity led to an induction into the Rock ‘N’ Roll Hall of Fame in 2006 and more than 40 million albums sold worldwide to date. As we look back at the band’s storied career, it makes Blondie’s current vibrancy that much more stunning after 40 years of entertaining all of us.

The acclaimed album Pollinator – out now!