A youth work team is being axed despite council reassurances, prompting anger from the Greens.

Brighton and Hove City Council said on its internal website known as “the Wave”: “From 1 August our youth service is changing.

“We will no longer have an in-house detached team working from the youth bus. You will still see the bus from time to time but there will no longer be a dedicated team.”

Yet just three weeks ago at a council meeting the Labour administration was asked directly about the youth bus by Green councillor Alex Phillips.

Councillor Dan Chapman, who chairs the council’s Children, Young People and Skills Committee, said: “The bus will be retained for a further year and resources will be available for the wider youth teams and the voluntary sector.” 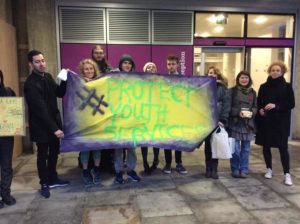 Councillor Phillips, who speaks for the Greens on children and young people, said this evening (Friday 11 August): “After the Labour council attempted to axe all council youth work last February, Greens launched a series of successful budget proposals that together with amendments from the Conservatives saw the youth service funding almost entirely reinstated.

“The disgraceful reality is that despite this, key elements of youth work are still being axed behind the scenes.

“The changes now being made ignore democratic decisions made by elected members and undermine trust in the council.

“And with Labour going back on a promise made just last month to retain the youth bus for another year, how will anyone believe anything this administration says in future?”

Councillor Phillips added that there had been a citywide campaign to save youth services before the budget meeting in February.

She condemned the cuts and criticised the lack of transparency around the implementation of the cuts, saying: “At the last full council meeting I directly challenged the Labour group about the current state of youth services and was told that the youth service information bus would be retained for a further year.

“Now we learn – from a notice quietly ushered out on an internal council network – that the entire dedicated detached youth work bus team is to be lost.

“The young people who campaigned to save the youth service repeatedly made clear that access to support where they lived made a huge difference.

“A few in-house services in the city centre mean little to young people unable to shore up the bus fare in and out of town.

“Detached youth work and services like the youth mobile information bus meant that help and support came to them, where they live, with advice and activities.

“Getting rid of detached youth work flies in the face of everything we and these young people campaigned to protect.”

The council said on its intranet site as part of the announcement about the changes: “Over the years the city has been lucky enough to have a bus which has had a positive impact on thousands of young people since 2003.

“The team want to thank everyone for their support in helping with the delivery of the bus.

“The council will still fund a Participation and Advocacy Team – and youth arts and Duke of Edinburgh programmes will continue to be delivered but now externally funded.”