The Portslade Aldridge Community Academy has reported an improvement in A-level performance, with a higher proportion of pupils achieving better grades. 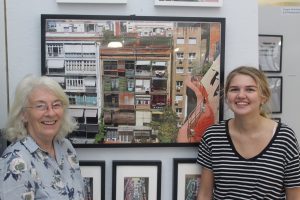 “Some 44 per cent of all grades this year awarded were A or A* or the equivalent.

“This is in addition to an impressive 100 per cent pass rate in vocational qualifications.

“An increased number of students achieved three qualifications at the highest grades (37 per cent).

“In IT, sport and travel and tourism qualifications 100 per cent of students achieved the equivalent of A*/B*.

“Among the students celebrating were Clarice Genova, who achieved ABBC (Italian, chemistry, maths and physics, respectively), and Jack Kelly and Thomas Gun who both achieved D*D* in both IT Subsidiary Diploma and Media Diploma (equivalent to 3.5 A* to B at A level).

“Lola-Mai Gurr is also celebrating achieving A*s in both her art and photography A levels.”

Lola-Mai said: “I’ve had such a fantastic time year at PACA6 and PACA. I’m so grateful to all of the staff, especially Ms Durham who’s been a fantastic inspiration to me and all my peers.

“I’ve made some fantastic friends and I have learned so much from the amazing teachers.

Three men jailed for drug dealing in Brighton and Hove