The Brighton bike share scheme is to go live in nine days’ time on Friday 1 September.

More than 30 of the 50 docking stations are expected to be in place by the official launch date with the rest being fitted throughout September.

The scheme’s 450 bikes are the first in Britain to combine docking station and dock-less locking technology.

The scheme will operate as BTN BikeShare using Life Bikes made by the American company Social Bicycle (SoBi).

Some people have referred to them as “Brighton’s Boris bikes” – a nod to Boris Johnson, who was the mayor of London when the scheme there went live.

Others have called them “Davey bikes” after Ian Davey, the former Brighton and Hove City Council member who was behind the local bike share scheme.

Hourbike, the company running the scheme in Brighton and Hove, said: “Users will be able to access and lock the Life Bikes at official docking stations along the seafront from Hove Lawns to near the Brighton Marina, as well as inland as far as the university campuses.

“The remaining docking stations for the sustainable public transport scheme are set to roll out during September.

“Residents and visitors will be able to hire and locate the bikes via the SoBi app.

“A casual rental plan, priced at 3p per minute (minimum spend £1), is ideal for occasional riding.

“More frequent users may prefer an annual membership which provides an hour of cycling, every day, for £72.” 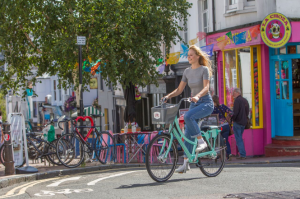 Hourbike owner Tim Caswell said: “The scheme will be a very positive addition to the city and has already largely been embraced by the community.

“We have seen how successful our bike share schemes have been in Reading, Oxford, and Liverpool – and these are cities that don’t have the same green credentials as Brighton and Hove or the same bike technology.”

Coast to Capital Local Enterprise Partnership chief executive Jonathan Sharrock said: “Coast to Capital provided significant funding for the Brighton and Hove Bike Share and we are delighted that it is launching next week.

“The scheme will deliver a multitude of environmental and health benefits, create new jobs and provide an excellent green transport option for both residents and visitors to the city.”

The scheme’s infrastructure and start-up costs are £1.45 million.

Coast to Capital awarded a £1.16 million grant with the council contributing match £290,000.

To pre-register for BTN BikeShare membership, go to www.btnbikeshare.com.