A Brighton man has been jailed for 14 years for trying to stab his ex-girlfriend to death at the home they used to share.

Christopher Woolven, 39, a road sweeper, attacked Danielle Morrison at the seafront flat they lived in on Wednesday 2 August.

After she broke up with him, the 23-year-old had gone to collect some belongings from their flat in Marine Parade, in Kemp Town, when Woolven struck.

He was waiting for her in the kitchen where he stabbed her with a kitchen knife before fleeing, leaving her to call 999.

The emergency services were called at 3.15pm and found Miss Morrison with serious stab wounds to her face, arm, leg and stomach.

Sussex Police said: “She was taken to the Royal Sussex County Hospital, Brighton, in a serious but stable condition and has since been released to recover from the physical injuries at home.

“Woolven handed himself into John Street Police Station shortly after the attack and was arrested for attempted murder, GBH (grievous bodily harm) with intent and possession of a weapon.

“He was charged the following day with attempted murder and appeared at Brighton Magistrates’ Court on (Friday) 4 August.”

Woolven appeared at Hove Crown Court on Thursday 24 August when he pleaded guilty.

Today (Friday 20 October) at Lewes Crown Court he was given a 19-year sentence.

Judge Jeremy Gold told him that he would spend 14 years in prison and serve another five years out on licence.

After Woolven was sentenced, Miss Morrison said: “When I went to collect my belongings, I would never have thought someone who I was with for seven years was capable of something like this, especially someone who claimed they loved me.

“I was so scared of not being able to escape and never see my family again.

“I have mental and physical scars as well as losing all my confidence. I constantly fear the worst when I go out now. 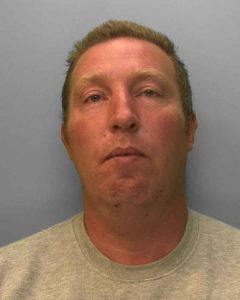 “I just hope after this sentencing I can try and move on with my life and focus on my future.

“It’s going to take a long time to get over what has happened to me but with my family and friends’ support I will overcome this.”

Detective Constable Leon Ryan, the investigating officer, said: “Woolven attacked his former girlfriend, Danielle, in a cold and callous attack without saying a word to her.

“He couldn’t cope that she had broken up with him and reacted by trying to kill her.

“She will be left with permanent scars, both physical and mental, because of Woolven.

“Woolven has pleaded guilty at the earliest opportunity, sparing his victim the ordeal of giving evidence at trial.

“Judge Gold said Woolven was not prepared to accept that she wanted the relationship to end and planned to kill her on what (he regarded) as a ‘if I can’t have you, no one will’ basis.

“She was stabbed 14 times – effectively leaving her for dead, inflicting grave injuries including a punctured diaphragm.

“Miraculously she recovered from the physical effects but the psychological effects will be longstanding.

“We have supported Danielle throughout and hope she can now find the support she needs through our partner agencies to try and find some closure.”