The Green Party’s only peer, Baroness Jones of Moulescoomb, has become a patron of St John’s School and College in Brighton.

The baroness, better known as Jenny Jones, was born and raised in Brighton, said: “I feel very lucky to be able to support such an excellent project in my home town.

“It is so important to have an inclusive society which benefits all.”

They hope that her appointment will help raise awareness of the work of St John’s, which is based in Walpole Road, Brighton. It also has premises in Seaford.

She is keen to help them increase the profile of the school and college in the local community and further afield.

Baroness Jones, the daughter of a hospital cook and a dinner lady, may also help to support and represent St John’s in learning disability issues and discussions both locally and in Parliament.

Mr Charleton said: “It’s a great honour to have the support of Jenny who will publicly help our charitable work and raise awareness for what we do.

“It’s a pleasure to gain the support of a local, influential and dedicated person with their finger on the pulse of Brighton’s issues and who understands our ongoing mission to make the world a better, safer and easily accessible place for our learners.”

Baroness Jones took her title from the Moulsecoomb council estate where she grew up. 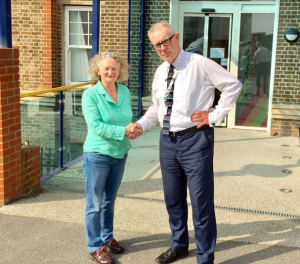 She started work as a youngster, mucking out horse stables to get a free horse ride.

Married at 20, she had two daughters before settling in London in 1991.

Before her career in politics, she worked as a crafts teacher,  a secretary, a book keeper, a shop assistant and an office manager.

Her political roles have included serving as deputy mayor of London when Ken Livingstone was mayor and deputy chair of the London Assembly Police and Crime Committee.

She was a councillor in Southwark and chaired the Green Party of England and Wales.

In 2004 she was named as one of 200 “women of achievement” by Buckingham Palace.