A new archway at the south entrance of The Level features the names and faces of historical figures which have helped shape the park and the city. 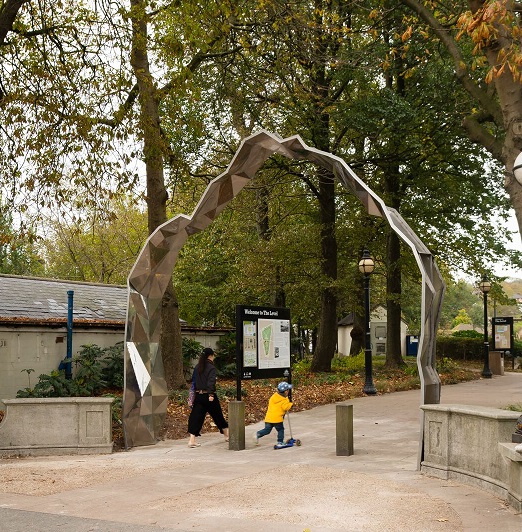 The Happenstance sculpture has been designed by a team of artists and architects from local creative architectural practice Alter & Company, winners of a national arts competition to develop a pedestrian archway.

The images were chosen following widespread consultation with park users.

It was funded from section 106 contributions from Zise Two Ltd, developer of the new Kings Education International School in Ditchling Road.

Grant Shepherd, Director of Alter & Company said: “Our approach to the design has been to embed the vast amount of history and memories collected of The Level Park over the past 300 years into a beautiful piece of interactive art that becomes a multi-faceted narrative.

“The characteristic mature trees that surround the park and the entrance provide shade and an intimate dappled atmosphere. Their presence deeply informed the design of our proposal, the Happenstance Archway.

“The idea of reflecting the silhouette of the overhanging trees at the entrance is that of an organic archway growing out from the existing elements of the park.

“There is also an integral notion in the aging of the leaves, they begin to lose bits of their fabric and holes are left that physically become a memory of what used to be.”

“He immediately walked me over to the south entrance which was fairly non-descript. The new archway creates a magical entrance into this very special and well-loved park.”

Councillor Gill Mitchell, chair of the council’s environment, transport and sustainability committee said: “This stunning new sculpture is an exciting addition to one of the city’s most popular parks. I’m sure it will be enjoyed by the hundreds of people who pass though the Level every day, both now and well into the future.”

The long history of The Level Park stretches back as far as the 1700s, when it was open grassland set within an agricultural landscape.

Since then its use has been continuous and varied – it has served as a cricket ground for the Prince of Wales, a venue for livestock fairs, a pony racing course, take off point for air balloon races, ban the bomb protests and naked bicycle rallies.

This work marks a new part of the Level’s story and present history.