Four houses look likely to be built on the site of 10 old garages in the Hollingbury area of Brighton in a scheme costing £1.2 million.

Brighton and Hove City Council said: “Plans to transform a rundown garage site in Rotherfield Crescent, Hollingbury, with four new council homes will be considered by the Housing and New Homes Committee on (Wednesday) 15 November.

“If the scheme gets the go ahead, 10 dilapidated garages will be demolished and replaced with a mix of two and three-bedroom rented homes, facing on to a communal garden.

“The proposal is part of the council’s New Homes for Neighbourhoods building programme, which aims to build at least 500 new homes on council land.”

A report councillors said: “To date 34 council homes for affordable rent have been completed under the New Homes for Neighbourhoods programme, 131 are on site and will be completed in this financial year, another 12 have planning permission and over 100 more are in the pipeline.”

Homes have been built in Whitehawk, Portslade, Hangleton and Kemp Town and 57 new flats are nearing completion in Kite Place, Whitehawk

Councillor Anne Meadows, who chairs the Housing and New Homes Committee, said: “Building affordable rented homes for local people is a priority for the council and this is an exciting proposal to give a new lease of life to a small site that’s become a target for fly-tipping and anti-social behaviour.”

The council consulted some people and received a number of positive comments although concern was expressed that the loss of the garages would exacerbate parking problems in the area.

Three of the houses will have three bedrooms and the other one will have two bedrooms.

The committee is due to consider the final design for the scheme on Wednesday.

If it is approved, a planning application is expected in the new year as planning permission will still be needed. 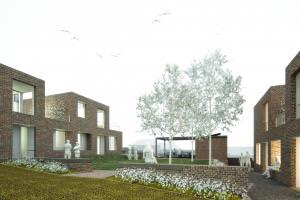 The council added: “All New Homes for Neighbourhoods properties are rented to people on the city’s housing register.”