Radio presenter Charlotte Petts has picked up a “new talent” award for her Growing Wild programme on the Brighton community station Radio Reverb.

She was presented with the Alan Titchmarsh New Talent Award last night (Thursday 23 November) at the Garden Media Guild Awards 2017. 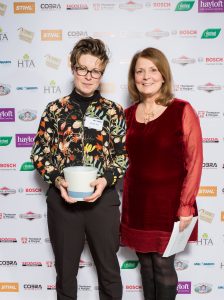 The awards celebrate “the best of horticultural communications, recognising the talent, skill and inspiration of garden media professionals”.

They are open for anyone to enter and give new talent and established players the chance to have their work recognised and judged by experts in the field.

The judges said: “Ultimately, Charlotte won out with original, rich content, relevant to novices and keen gardeners alike, drawing out fascinating narratives from her interviewees without saying too much herself.”

Growing Wild airs on Radio Reverb at 5pm on the last Sunday of each month. The show covers nature and related topics such as wild food, foraging, wild swimming and adventure. The programme is sponsored by Infinity Foods.

“It was such an honour to have been nominated alongside so many talented people so I was surprised to have been crowned the winner. I couldn’t be more pleased.”

The awards ceremony was held at the Savoy hotel, in London, and was hosted by broadcaster Gyles Brandreth.

The station picked up a second award last night, with Lance Dann winning Best Drama Producer at the Audio Production Awards for his bio-thriller Blood Culture which aired on Radio Reverb over Halloween.

Earlier in the month BBC Sussex celebrated picking up three prizes at the Gillards – the annual BBC local radio awards.

This month is the 50th anniversary of the first BBC local radio station – Radio Leicester – with Radio Brighton (now BBC Sussex) among the earliest. It went on air on Wednesday 14 February 1968.

BBC Sussex lunchtime host Alison Ferns won the prize for Best Presenter. The station’s reporting on the Southern Rail Strike came second in the Coverage of a News Story category.

Breakfast show presenter Neil Pringle’s preparation for and participation in the Brighton Marathon earned him a “bronze” in the Moment of the Year category. It was the former station manager’s third Gillard.