A High Court judge has backed a suspended Brighton Labour Party member in his fight against expulsion. 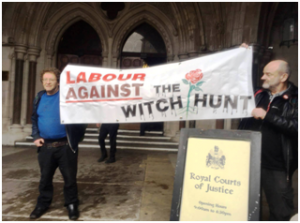 Tony Greenstein applied for an injunction when the party refused to delay a disciplinary hearing, details of which were sent to him while he was in hospital after an operation.

It was granted for breach of contract because the party had refused to postpone the disciplinary proceedings against Mr Greenstein.

Mr Greenstein has been suspended for 20 months. He received a summons on Thursday 2 November to a disciplinary hearing on Monday 11 December while in hospital recovering from surgery.

This was less than the six weeks’ notice stipulated in the rules.

The National Constitutional Committee turned down requests for a postponement. It insisted that Mr Greenstein file a response within four weeks to a 189-page bundle which appeared to have been compiled over the previous 17 months.

Mr Greenstein filed an application for an injunction to the High Court at the Royal Courts of Justice restraining Mr McNicol from holding the hearing next Monday (11 December).

The injunction was granted yesterday, preventing the party from holding the meeting until Monday 8 January at the earliest.

Mr Justice Phillips ruled that the Labour Party had “dealt brusquely and without any real reasons with Mr Greenstein’s application for an extension and that there had been a breach of their obligation to ensure fairness”.

Mr Greenstein, who is vice-chair of Labour Against the Witch Hunt, said: “All my pleas to the Labour Party to postpone the hearing unti the new year fell on deaf ears.

“Having repeatedly leaked details of my case to the national press, Iain McNicol and the Compliance Unit were determined to expedite my hearing and expel me.

“Despite being Jewish, I was suspended as part of the false anti-semitism witch-hunt in March 2016.

“I had evidence that I was being treated differently from other people who were suspended but nothing I said, despite having been in hospital recently, would persuade these people to change their minds.

“It is as if they have learnt nothing from the death of Carl Sergeant.”

Mr Sargeant was a Labour member of the Welsh Assembly who appears to have killed himself after being suspended from the party without being told what he had done and who complained about him.

Mr Greenstein added: “I would like to thank Mark MacDonald QC for his pro bono help and assistance.”