Protests held in Brighton and Hove as train fares rise

Protests were held at Brighton, Hove and Portslade railway stations as fares rose by more than 3 per cent yesterday (Tuesday 2 January).

Members of the Labour Party and the RMT union were among those taking part in the protests.

The price doesn’t include bus or tube travel – and the level of the rise exceeds the 3.4 per cent average for unregulated fares.

The increase each January is automatically linked to the inflation rate in the previous July, using a measure known as the RPI (Retail Prices Index).

Peter Kyle, the Labour MP for Hove and himself a commuter, said yesterday: “The rise in train fares is an insult to long-suffering passengers.

“Today, the day the rise came into force, trains were leaving Brighton and Hove overcrowded and late which says it all.

“We need a period of relief for passengers and no further rises for underperforming franchises until they get their act together.”

Paul Plummer, chief executive of the Rail Delivery Group, which brings together train operators and Network Rail, said: “On average, fares will rise by less than inflation this year.

“For every pound paid in fares, 97p goes directly back to operating and improving services and, with more people travelling, that means more money for investment by the private and public partnership railway to build the better network Britain needs.

“Working together in partnership across the industry and with government our long-term plan to improve will secure £85 billion of additional economic benefits while enabling further investment and improvement for customers, communities and our people.

“Over the next 18 months alone the country will see an unprecedented transformation in rail services, including dramatic improvements across the Thameslink network and through the Great North Rail Project.”

He was speaking on the day that five more platforms reopened at London Bridge as the £1 billion modernisation programme there nears completion.

Work started in 2013 and has also involved upgrading the track in and around the station which is used by about 50 million passengers a year. 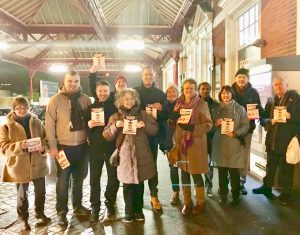 The upgrade should increase the number of Thameslink trains an hour – including trains to and from Brighton – from 12 to 24 although the increase will be phased and delayed.

The aim is not just to increase capacity – with more and longer trains – but to reduce delays and improve reliability.