An experiment filmed in Brighton found that more than a thousand people walked past an empty plastic bottle left in the street even though there was a rubbish bin near by.

Just five people picked up the bottle and put it in the bin during the hour-long test, filmed in New Road for Brighton and Hove City Council.

After viewing the result, the council said: “City residents and tourists are being asked to make a new year resolution to help keep our streets clean by putting litter in a bin.

“A new, short video, made by the city council, asks ‘would you pick up a bottle left on the street’, and then shows how in just one hour 1,296 people walked past an empty plastic water bottle beside a bin in New Road without discarding it.

“However, five litter-conscious citizens, young and old, did their good deed by stopping to lift the bottle and drop it in the wastebasket – and each received a goodie bag for helping to keep the streets clean.”

“A lot of us pass by litter on our streets without thinking about it or have a ‘not my problem’ or ‘nothing to do with me’ attitude.

“However, I’d like to congratulate the five who spent the time ensuring the bottle was disposed of properly.

“Our aim is to make everyone more aware of litter and how easy it is to help keep our streets clean and the city tidy.”

The council said: “The film is part of phase 2 of the council’s #StreetsAhead campaign which aims to raise awareness about litter and how we can all work together to keep our beaches and streets clean.

“Phase 1 launched last August and focused on removing litter from the seafront, including silent disco beach cleans to prevent waste being washed into the sea and endangering marine life.

“Phase 2 takes the campaign from the beach to the city’s streets including North Street, New Road, Queen’s Road, some of the North Laine and a part of Western Road. 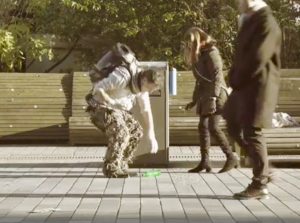 “The campaign is funded by fixed penalty notice fines that have been handed to people caught dropping litter, including cigarette ends, on our streets.

“Fixed penalty notices have proved popular with residents after a recent council survey showed 88 per cent of those surveyed believe there should be stricter fines for litterbugs.”