After eight years in London – and more than two years after being booked to come to Brighton – the touring version of the much-loved tale is finally here. 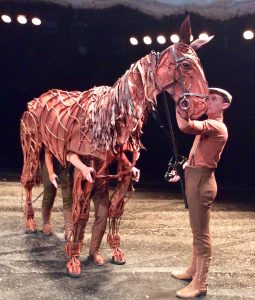 Adapted from the Michael Morpurgo book of the same name, the star of the play is Joey, a life-size puppet version of the “splendid red bay” horse.

He stepped out on to the stage today during the final rehearsals for the show’s opening night.

Joey is made of cane and weighs more than 10 stone (63.5kg). He is operated by three puppeteers – one dressed like an Edwardian stable boy to handle the head. Two others are inside for the heart and hind. 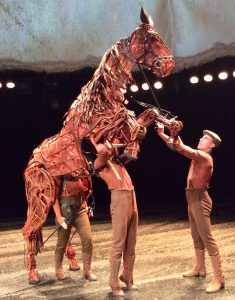 While there is only one Joey – only the one puppet – there are four teams of puppeteers and they undergo extensive training to learn how horses move and react.

The story follows Joey who is sold to the cavalry and shipped to France at the start of the First World War.

He’s soon caught up in enemy fire and fate takes him on an extraordinary journey, serving on both sides before finding himself alone in no man’s land.

The story also follows Albert, the boy who cared for Joey before the war. It tells how he enlists under age and embarks on a treacherous mission to find his beloved horse and bring him home. 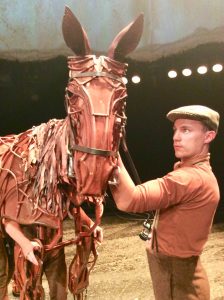 The play has been staged in 11 countries and been watched by more than seven million people so far.

The 21 performances in Brighton are part of the National Theatre production’s tenth anniversary tour.

Kash Bennett, the producer of War Horse, said: “We are absolutely delighted to be bringing War Horse to the Brighton Centre.

“We hope that today, with Joey’s appearance in the city, we can bring people in Brighton and Hove a taste of the theatrical magic and artistry that Sussex audiences can look forward to with this very special show.”

Rebecca Esteves, of the Brighton Centre, said: “We’re delighted to play host to this iconic, critically acclaimed production on its first ever visit to the city.

“We’re sure that the people of the area will take this extraordinary play to their hearts.”

Michael Morpurgo said that “after a few months’ rest, out at pasture, Joey, the War Horse and his great team from the National Theatre” were touring Britain in the centenary of the year the Great War ended.

The author added: “I am so pleased this is happening – that so many more people will have the chance to enjoy this unique theatrical event. Steady boy, steady Joey. Trot on!”