A masterplan is to be drawn up for an area near Hove Station after a £70,000 grant was awarded to Brighton and Hove City Council.

The money will be used to create a masterplan and try to turn it into reality on land labelled the Conway Street Industrial Area.

Almost 70 people turned out to hear about and share ideas for the masterplan – and to learn more about a masterplan for the surrounding area – to include hundreds of new homes as well business units.

They crowded into the Honeycroft centre, in Sackville Road, Hove, today (Saturday 17 February) where information boards were on display with visuals and commentary.

They looked at an area stretching from the Sackville Trading Estate to Eaton Road.

There were speakers too, including Nigel Richardson and Mike Gibson, from the Hove Station Neighbourhood Forum, councillor planning chief Liz Hobden, and ward councillor Jackie O’Quinn.

The event was organised by the Neighbourhood Forum and billed as a Have Your Say Day.

The masterplan aims to ensure that the regeneration is co-ordinated, not piecemeal. Other goals include improving connectivity around the station and improving the design of public spaces, community facilities and transport.

Several residents raised the issue of school places. The council’s head of planning, Liz Hobden, said that the council was introducing a community infrastructure levy (CIL) which would be a tariff for strategic infrastructure such as schools and roads.

She said that the new tax would sit alongside developer contributions – also known as section 106 money – but it would not be tied to a particular development. The Forum will be able to access a percentage of this money for local projects.

Alan Gillam raised concerns about the impact of development on local businesses, some of which have been forced to close, he said.

Ms Hobden acknowledged the need to protect industrial spaces but said that the area was changing and there would be a displacement effect on businesses and people who worked there. 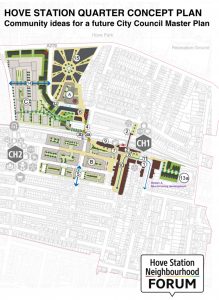 ”It’s a real missed opportunity. It looks like it will be high-end housing and gentrification.”

Others expressed concern about the density of housing. But Carrie Hynds, the Liberal Democrat parliamentary candidate for Hove, thought the industrial area in Conway Street west of the station was an ideal place for high-rise housing.

She said that the new homes must be affordable to local people. If they were unaffordable, they would make the housing crisis worse.

Ms Hobden said the council was trying to bring rents down in line with the local housing allowance which is 70 per cent of market rates.

Councillor Jackie O’Quinn said that the government should stop the right to buy of council housing and reduce the discounts.