Labour candidate Isobel Sharkey has won a seat on Telscombe Town Council by just two votes in a by-election.

The party said that it had recorded “a historic double”, with Christine Robinson also winning a town council by-election, albeit by a more comfortable margin. 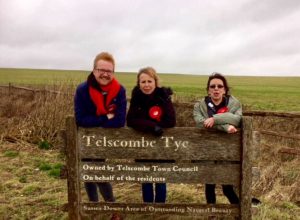 Her two-vote majority was even tighter the seven votes by which Dennis Hobden won the Brighton Kemptown seat for Labour in 1964. It was the party’s first Sussex seat in the House of Commons.

Labour said: “Victory in the Telscombe Town Council by-elections for Christine Robinson (East Saltdean Ward) and Isobel Sharkey (Telscombe Cliffs Ward) means that for the first time there are two Labour voices on the council.

“This follows on from the landslide victory for MP Lloyd Russell-Moyle in last year’s hastily called general election.

“This latest result marks a clear change for the area, where local communities are looking for fresh ideas from Labour councillors to deal with ongoing local concearns such as congestion on the A259 and a lack of key infrastructure.

“The Isobel and Christine’s work will begin immediately, ensuring that a strong opposition is provided and the community’s needs are best served.

“With local town council and district council elections next May, the potential for wider representation in Telscombe, Peacehaven and across the wider district is now very real.”

The results for the two wards were as follows.

The council has recently appointed a new town clerk, Stella Newman. She has worked for the council for 14 years and has been promoted from deputy town clerk.

The next meeting of the full council is scheduled for Wednesday 21 March. The Planning and Highways Committee is due to meet on Monday (12 March). And the annual town meeting is set for Wednesday 18 April.

All three meetings are to be held in the Telscombe Civic Centre starting at 7.30pm.