Daredevils abseil from i360 for charity ‘iDrop’ fundraiser

Twenty-nine daredevils raised thousands of pounds for a Brighton charity with an “iDrop” abseil from the i360.

Between them they raised £37,000 for Rockinghorse children’s charity which is putting the money towards specialist equipment at the Trevor Mann Baby Unit at the Royal Sussex County Hospital. 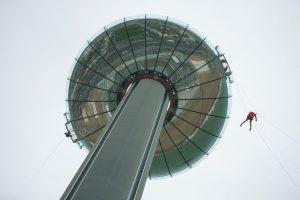 Photographs courtesy of the British Airways i360 / Sussex Sports Photography

Several of those taking part have close connections to the charity, which is the fundraising arm of the Royal Alexandra Children’s Hospital in Brighton. 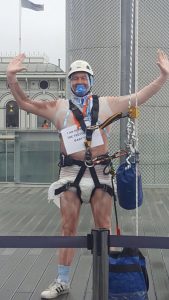 Despite the chilly weather everyone threw themselves into the spirit of the occasion, with local businessman Colin Brace, 53, dressed as a baby to highlight the event’s support for the premature baby unit.

Rockinghorse chief executive Ryan Heal said before the first abseiler dropped: “The contribution you will make to the lives of sick children in Sussex will be felt for years to come. Thank you and good luck!”

After the event he said: “Today has been an incredible day for Rockinghorse. Our first thanks go to the i360 for inviting us to work with them on this project.

“Our abseilers then took up the challenge to accomplish this awesome feat. Together they have raised over £37,000 for our cause and the impact of those funds will be huge for the children in our city that need the most help.

“Huge thanks to everyone involved, a day for many to remember forever.” 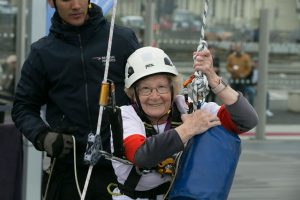 Jeannine Brett, 85, took part in the iDrop Abseil for charity

British Airways i360 executive director Steve Bax said: “Our first iDrop Abseil event has been a fantastic success and the participants have already raised a huge amount of vital funds for Rockinghorse. 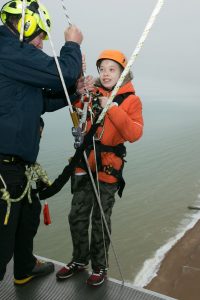 “We would like to thank the brilliant team at Belay Rope Access which operated the abseil, Chris Eubank Jnr for his support and every other person who took part today. 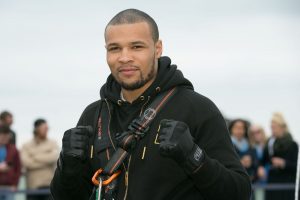 “We are thrilled with the response from the participants and the wider public and we’re delighted to announce that we will soon be launching public abseil events. Registration is now open on our website.”