A Conservative councillor has spoken out after it emerged that two seafront paddling pools would be out of action over the bank holiday weekend. 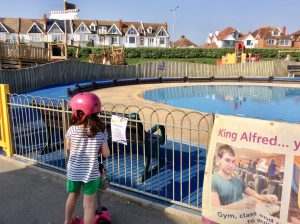 Councillor Robert Nemeth, who represents Wish Ward in Hove, said: “Councillor Garry Peltzer Dunn and I are hugely disappointed that Hove Lagoon’s pool is to be out of action during what should be one of the busiest weekends of the year.

“The mind boggles as to why the checks weren’t carried out a day or two earlier so that any problems could be remedied in advance.

“I imagine that it will be equally detrimental to those businesses on the Brighton seafront.

“This is yet another example of the Labour administration neglecting the basics to the detriment of local residents and our local tourism industry.

“I can’t recall a time when the city was more broken, dirty and graffiti-ridden.”

The email from Toni Manuel said: “I wanted to update you on the latest situation regarding the paddling pool facilities along our seafront.

“As you will be aware major work to the underground pipework at the King’s Road Paddling pool has been ongoing since early April. 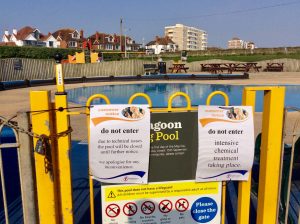 “Despite the tight timescales for this project, I can report that the contractor is due to complete this work and be off site by the end of today as planned.

“Unfortunately, despite everyone’s best efforts, our leisure operator Freedom Leisure has reported to us today that the water quality test taken earlier this week and which is required in order to open the facility has failed due to bacteriological contamination.

“As a result, the paddling pool is currently being drained and will be chemically treated and refilled over the weekend.

“A new test will be taken on Tuesday and, subject to a satisfactory result, the pool should be reopened to the public on Thursday.

“The paddling pool at Hove Lagoon, which has been operational since early May, has recently had the first of the required monthly water tests.

“Unfortunately, this first test has failed due to bacteriological contamination.

“It is impossible to know where this contamination has come from – it could be from birds, dogs or human contamination – but the procedure to cleanse the water in order to reopen the paddling pool is the same as above.

“This procedure has been completed and the retest has been undertaken today.

“The water test requires 48 hours of incubation before the results can be confirmed which means that due to the bank holiday weekend the earliest the test results will be known is Tuesday.

“If the test results show the contamination has been eradicated then the paddling pool will reopen on Tuesday.

“The safety and hygiene of all our leisure facilities is of paramount importance to the council which is why we insist upon regular independent bacteriological testing on top of the daily testing regimes.

“This situation is by no means ideal and is not what we would have hoped for over the bank holiday weekend and half-term holiday but unfortunately there is nothing further which can be done to expedite the pool openings.

“The press office are aware of the situation are responding to inquires on social media while the Freedom Leisure staff and council seafront officers will be available to communicate this information to members of the public and businesses on site over the coming days.

“The pools are physically closed off with fencing and signage to advise the public not to enter the water.”

Powerful performance from the Screaming Females in Brighton