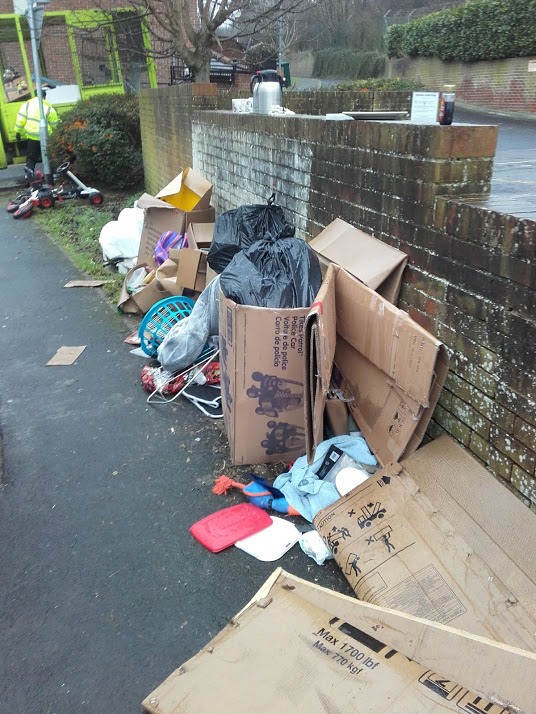 A Brighton woman who said she had dumped rubbish on the pavement because her bin was overflowing was convicted of fly-tipping yesterday and ordered to pay £400 in fines and costs.

Christine Togher, 55, of Saunders Park View, denied leaving her trash where it was found dumped by the city’s so-called litter police – but said she had left it next to her wheelie bin on the other side of the road.

She said the bins were full because they hadn’t been emptied for more than two weeks. The dumped trash was discovered on February 19 – during a period when truck breakdowns had seen collections missed across the city.

However, CityClean said there were no recorded issues with refuse collections in her road that month.

Yesterday, at her trial at Brighton Magistrates’ Court, she said: “Sometimes the rubbish is collected, sometimes we would wait two to three weeks for a collection.

“Then, the fly-tipping started to happen across the road, constantly.

“There’s a wheelie bin in front of the flats and if the bins were full, I’d put my rubbish on the side of them.

“In February, the bins were completely full and brimming over . . . I put my rubbish by my bin on the left hand side of the road because that’s the appropriate place to put it.

“Things were getting moved from one side of the road to the other side because workmen were moving things in and out.”

The court was also shown a video of Ms Togher being interviewed by officers working for Brighton and Hove Council’s environmental enforcement contractors, 3GS.

In it, she admitted the cardboard box filled with rubbish was hers, but said that not all the dumped trash was hers, adding: “It’s not just me that does it, everybody else does it as well.”

The magistrates bench found Togher guilty and she was fined £120, and ordered to pay a victim surcharge of £30 and costs of £250.