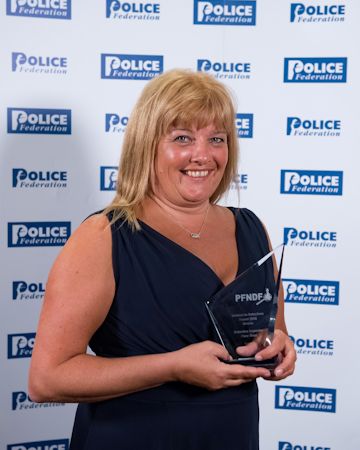 A Brighton detective has been given a national award to recognise how she has become a role model to the city’s police investigation team.

Clare, who retires next month, became a detective in 1995 and has acted as a role model and mentor to detectives across the force.

She said: “I was hugely honoured and humbled to be nominated let alone win the award. I have worked with such amazing detectives and supervisors who have made such a difference to people who need help.

“I have always tried my best to follow their example. It is incredibly satisfying and rewarding to be a detective and help those who need us the most.”

DCI Shiel has provided excellent leadership skills and mentoring to those who have trained as detectives. She has coached them through their training and always made time for staff development.

DCI Shiel’s successes include Operation Adio, a two year an investigation into Smash EDO, a protest group with a long history of civil claims against Sussex Police. She helped secure several convictions and ensured that claims were robustly challenged and saved approximately £100,000.

She has also worked relentlessly to target the most persistent and problematic offenders and keep a tight grip on those causing the most problems locally.

Detective Superintendent Stuart Hale said: “Clare is an inspirational leader who has dedicated her whole career to being a detective. Her desire to support the vulnerable and the community she serves is infectious and she is a true role model for everyone.

“Colleagues from all departments and at every level seek her out for help, support and advice, this includes senior officers. Her knowledge, decision making and commitment as a senior detective are truly outstanding and the reasons why she was recognised at a national level with this award.

“The biggest difference she makes is on the day to day investigations, where she is always involved, guiding in that most unique of ways, leaving her staff with the impression that the way forward was all their idea, thereby developing not just their knowledge and skills but confidence, through this coaching approach.

“Every Detective Sergeant that has come through Brighton Investigations in the past ten years have developed and owe their detective prowess, to some extent to Clare. No matter how busy she is or pressures she is under, she always makes time for staff development.”

Chief Constable Giles York said: “I am delighted that this honour has been given to Clare who is a shining example for detectives throughout the force.

“Her hard work and dedication has made a huge difference to, not only those she has worked with, but members of the public who she has helped keep safe. I am incredibly proud to have someone like Clare to be working in the force.”

The awards ceremony was held in Manchester last night.