The Conservatives have picked Katy Bourne to run for a third term as the Sussex police and crime commissioner. 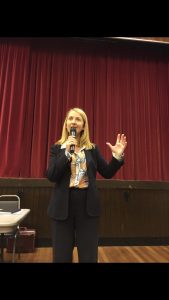 Mrs Bourne was chosen as the party’s candidate last night (Monday 15 October) at a meeting at Lancing Parish Hall.

She was unopposed in her bid to contest the election in May 2020.

Mrs Bourne said: “I’m delighted to have been reselected tonight by Conservative members from across Sussex to be their police and crime commissioner candidate for the forthcoming election in May 2020.

“It is a huge privilege and honour to have their continued support.”

She came to office in the inaugural elections in November 2012 when PCCs replaced police authorities.