It dozen get any better than The Lovely Eggs 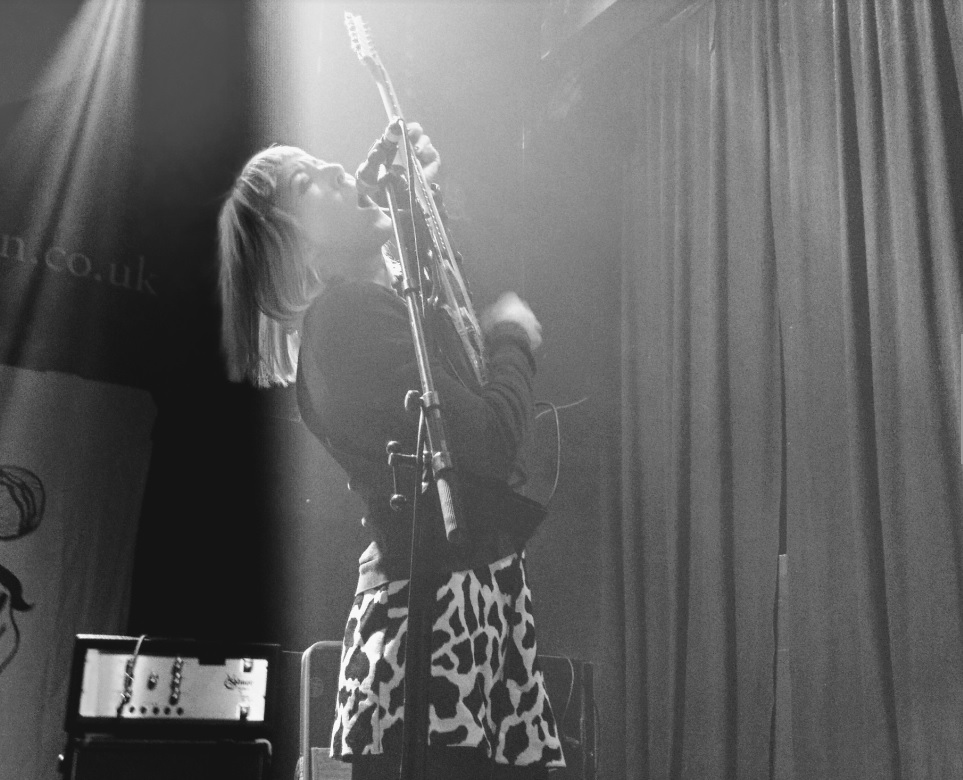 Saturday night in Brighton could have provided a musical dilemma for those of a Punk Rock persuasion as the much vaunted IDLES were in town, but as usual I was committed to going to see the wacky and wonderful duo that go by the name of The Lovely Eggs.

They have never failed to entertain in the past and for eleven of your English pounds (plus booking fee) it was a bargain that I could not pass up. 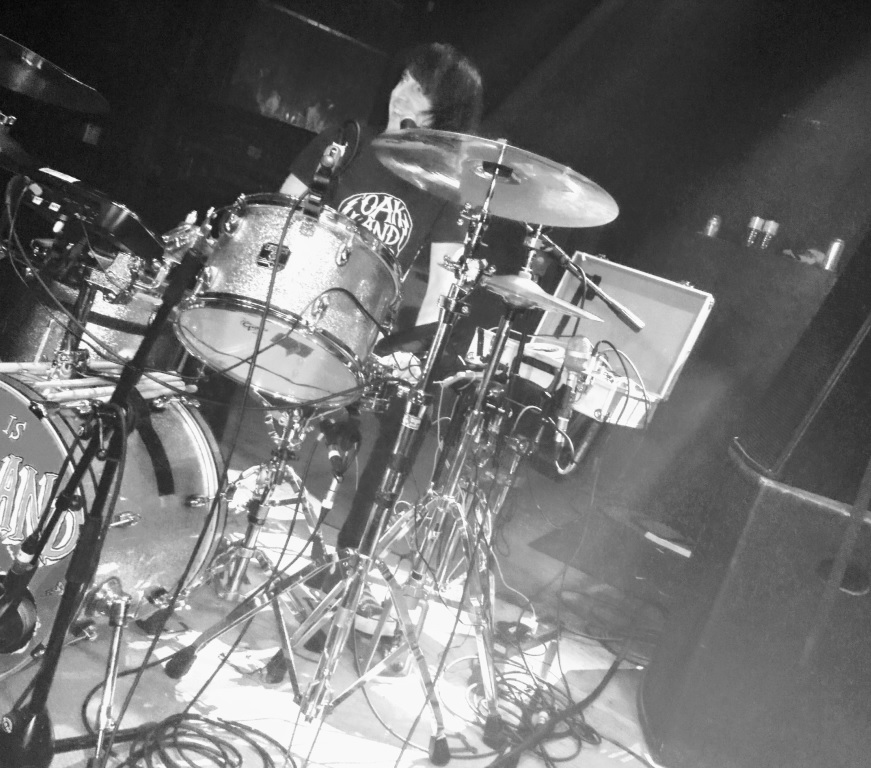 They have embarked on yet another tour to coincide with the school holidays as Holly Ross (vocals & guitar) and David Blackwell (drums & backing vocals) continue to successfully mix music with parenthood and marriage.

The Eggs hit Brighton on the eve of their largest ever headlining gig in their twelve years of existence at The Scala in London with a capacity of 800, so you may think that it is a strange time for them to be having a yearlong sabbatical as they are on the verge of conquering E(n)ggland. Given that David was in hospital with pneumonia just 7 weeks ago it is probably understandable, but 2019 will be lonely without them.

With Halloween fast approaching appropriately The Lovely Eggs returned to the intimate surroundings of The Haunt and the scene of their infamous gig of 2017. Read about it HERE. 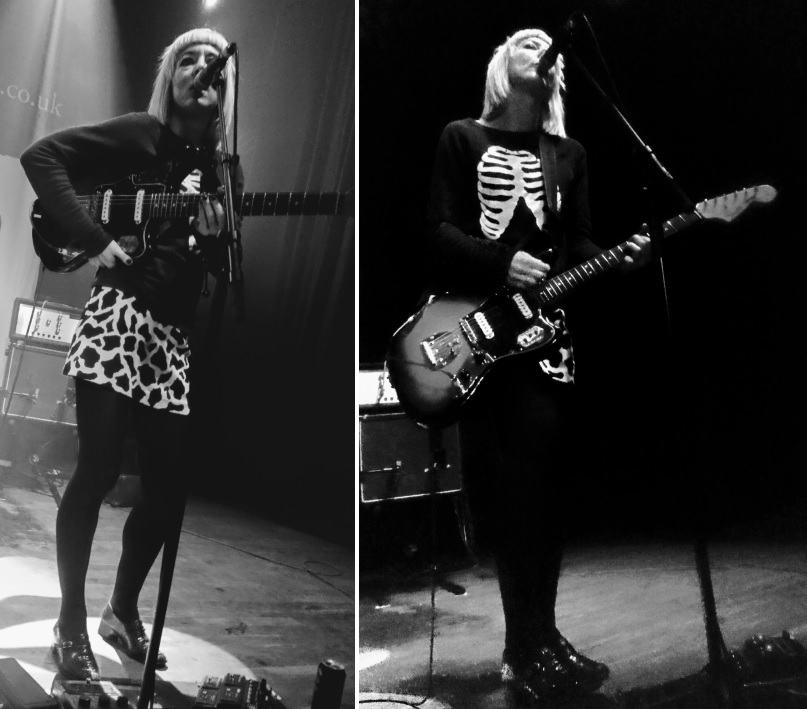 In between songs Holly reminisced about that night when the front three rows were standing motionless with arms folded and one woman chose to take out her pocket mirror and reapply her lipstick mid song. That riled Holly somewhat and changed the whole demeanour of the gig after she encouraged the moshers to come forth and replace the arm folders at the front, resulting in mayhem and a rarely heard encore.

Tonight the venue was once again packed with Eggheads and arms were most definitely unfolded maybe in fear of being called out. This has obviously given the band an affinity with Brighton and tonight they talked about the crowd being like family. Their stage presence and obvious love for each other oozed into the crowd to create a wonderful atmosphere, noticeably so for a young couple who participated in a smooch in the heart of the mosh pit. 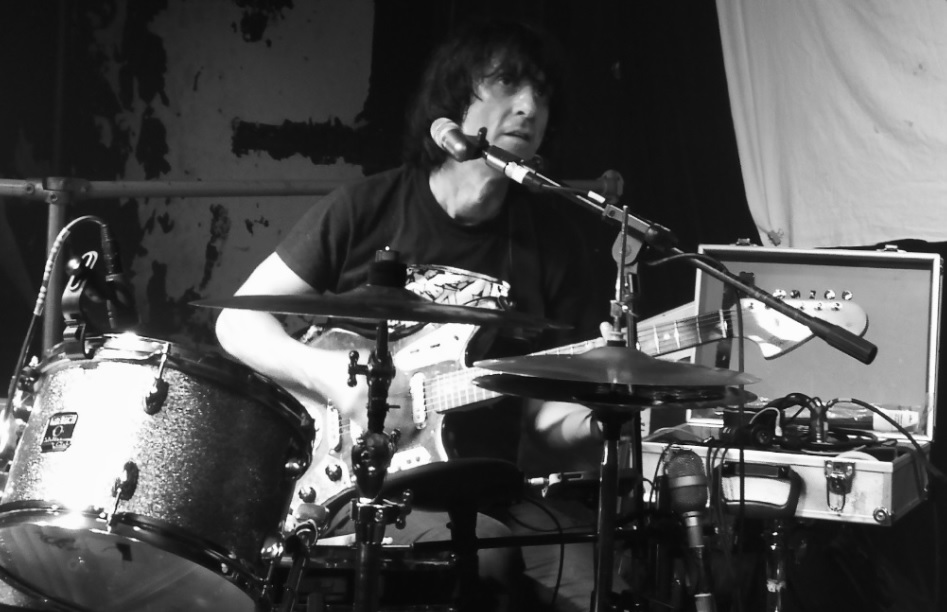 There was the usual mix of zany anecdotes including the discussion with Chris Packham about Crocodiles at the Southampton gig. Holly also kindly shared her experience of getting rather drunk on tour and being sick in a bag, hence why she was only restricting herself to just the two cans of cider tonight. If they just played music then there would probably be time for three or more songs, but that would take so much away from the whole experience of a performance by The Lovely Eggs.

Musically, which is also what the crowd came along for, tonight they played thirteen tracks of which nine were from their critically acclaimed most recent offering ‘This Is Eggland’. Distinctly more edgy and angry likely given the uncertainty in the world, and there was no holding back tonight as The Eggs went straight into top gear with the ripsnorter ‘I’m With You’ which set the tone for the gig. The music was often frenetic and the energy of the band was unrelenting, showing that David has made a good recovery from his recent health scare. Obviously, the mix of Red Bull (the first time he has ever drunk one on stage), a bottle of water and the obligatory can of lager went someway to assisting David and his tireless banging of the drums. The set was interspersed with classics such as the wonderfully psychedelic ‘Magic Onion’ and ‘Allergies’; the anthemic ‘F*ck It’; and the always relevant ‘People are Tw*ts!’. 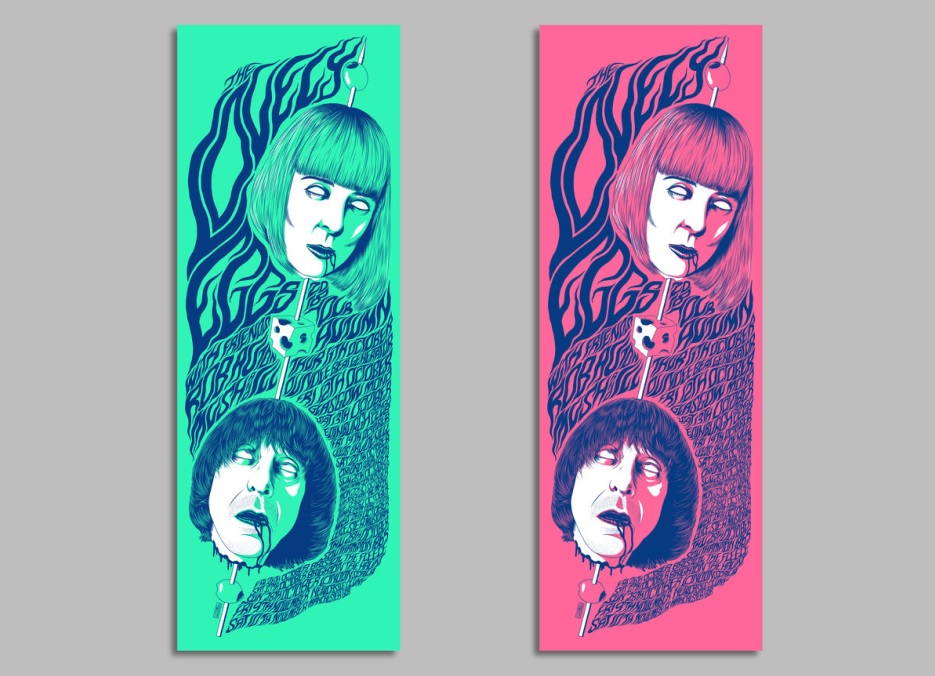 The Lovely Eggs limited edition posters that they had for sale

The hardest thing is trying to write a review when you are mesmerised by the band and all that happens onstage, so thankfully there are only the two of them! You also can’t help but mosh, dance or get jiggy to ‘Wiggy Giggy’. ‘I Shouldn’t Have Said That’ was just one of the songs that really did it for me tonight. When Holly comes to the edge of the stage and almost hits you in the head with her guitar then you know that you have attended another memorable gig.

If like me, you are going to miss The Lovely Eggs, then I urge you to keep abreast of their shenanigans on various social media sites to get an insight into what goes on in their heads and inspires them to write such outlandish lyrics. I would also implore you to check out their music videos on YouTube. Definitely worth a gander even if you are not a fan.

A true DIY band in every sense and they have stuck to their beliefs. Living up north they have recently crusaded against local issues such as Fracking in Lancashire and the impending closure of Lancaster Music Co-op. They will chat with their fans post gig as they work the merchandise stall. Order merchandise from their website store and you will get a personalised handwritten message to accompany. You would have to be an oaf not to love les oeufs. Roll on 2020. 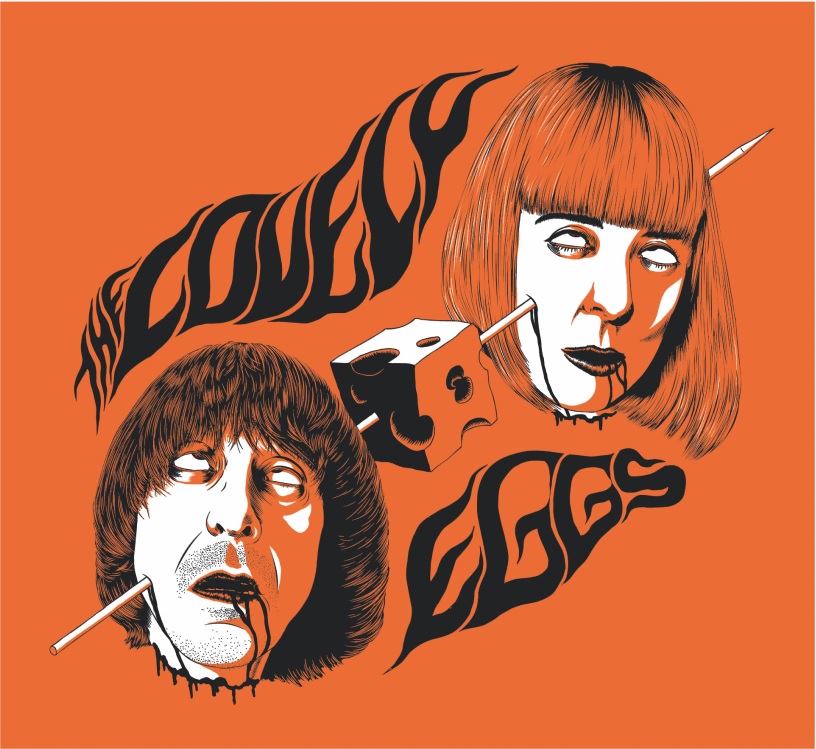 Both support acts came from across the Pennines in the form of Mush from Leeds and Rob Auton from York. 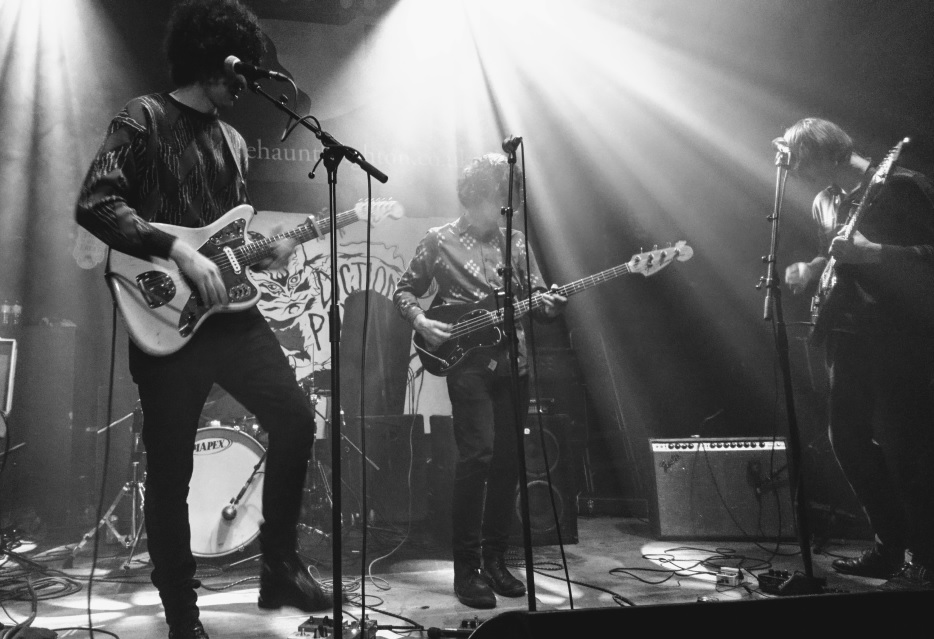 This was my first viewing of Mush (Dan – guitar, Tyson – guitar, Nick – bass, Phil – drums) and they were impressive. Their post-punk set was highlighted by the closing track ‘Alternative Facts’. I can’t remember the last single that I listened to that was ten minutes long, but this song about fake news and the increase in soundbite politics, left the crowd feeling more than satisfied with the quality of the support band. They will definitely be on my radar in the future and hopefully will return to the south coast in the near future.
Find out more on Mush:
https://www.facebook.com/mushleeds/ 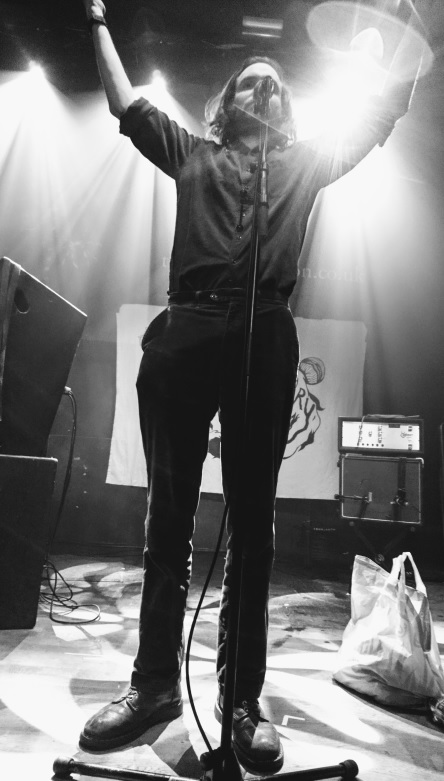 I had previously seen Rob ‘the persona of an unprepared best man’ Auton at Hastings earlier in the year and he was probably even funnier this time round. Entering stage with a reusable plastic bag full of props including leaves; a green, red, yellow and orange pepper; a self-designed yellow t-shirt with a permanent marker slogan about how nobody ever used to apologise for going through a tunnel before mobile phones; and of course his three poetry books. He read some of his greatest poetry hits and engaged well with the audience in his usual awkward style. There was an impromptu t-shirt auction during The Lovely Eggs set and I believe that it was sold for the princely sum of £35. An all-round good night for Mr Auton.
Learn more about Rob Auton:
https://www.facebook.com/robert.auton.79