Triptych 2019 to return to Brighton in January 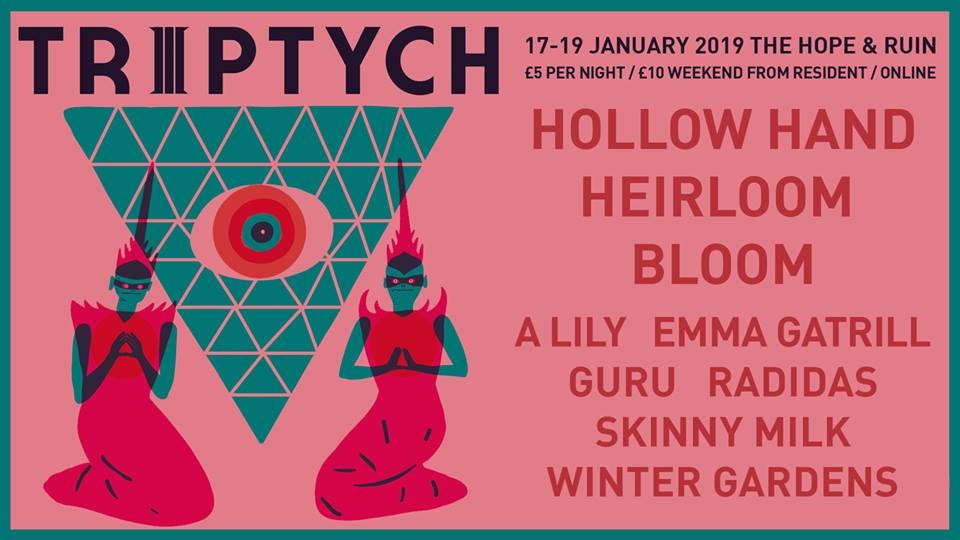 Triptych is a series of three music events and three EP record releases brought to you by Brighton’s ‘Love Thy Neighbour’ label and promoters.

The events are now running on Friday 18th, Saturday 19th and Sunday 20th January 2019 and are all held at The Hope & Ruin located on Queens Road, Brighton. Note that due to a bereavement the Thursday 17th January event has been moved to Sunday 20th January instead! Refunds from point of purchase if you are unable to make the new date.

Three of ‘Love Thy Neighbours’ favourite bands will perform music sets per evening. Each night will carry a lathe-cut vinyl record release featuring the acts performing on that evening. These vinyl releases are seriously limited with a mere 15 copies available for purchase each night! Yes, that’s correct just 15. So across the three nights there are only a total of 45 pieces of yummy vinyl, so collectors take note!

The nine artists taking part will be: 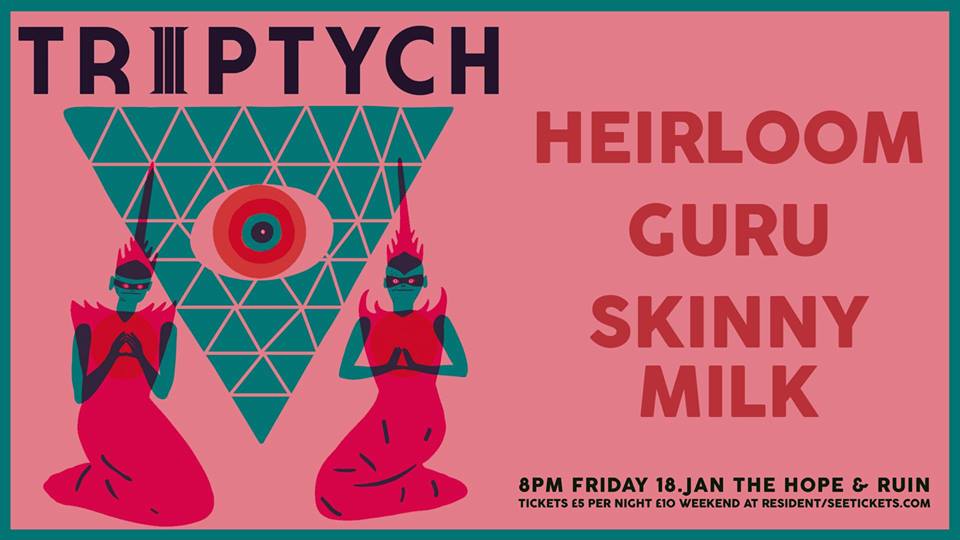 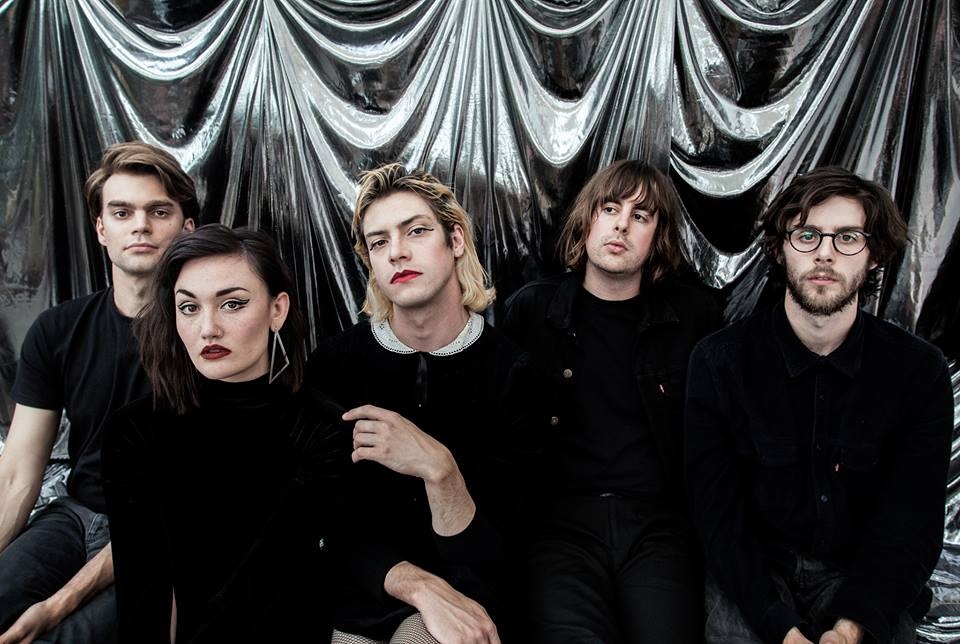 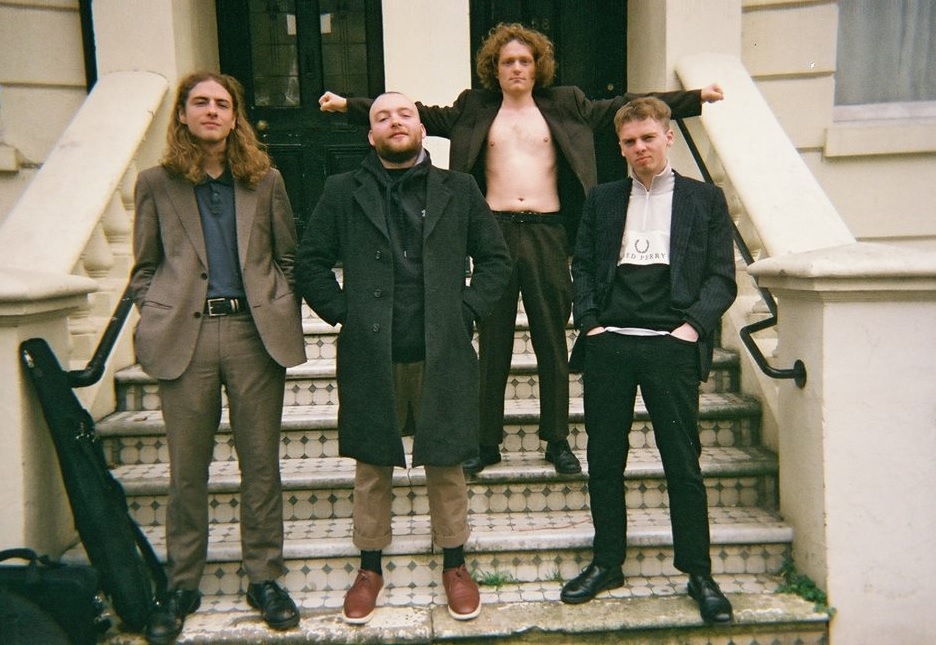 GURU are Tom (vocals), Kieran (guitar), Fergus (bass) and Simon (drums) and they are Brighton’s answer for the crown of purveyors of brutalist indie rock. They are well worth comparing to those initial Shame cuts or even elements of the Fat Whites. Picking apart modern relationships in an era of hyper-capitalism, a kind of barbed, deeply British take on art-punk. “Guru blend psychedelia with fuzz and punk to bring one of the most promising and unique new sounds. It’s harsh and in your face, with outstanding vocals, tasty riffs and heavy bass. These guys really know how to go hard. Yes, you will find them in the pub after.” – Bad Luck Magazine 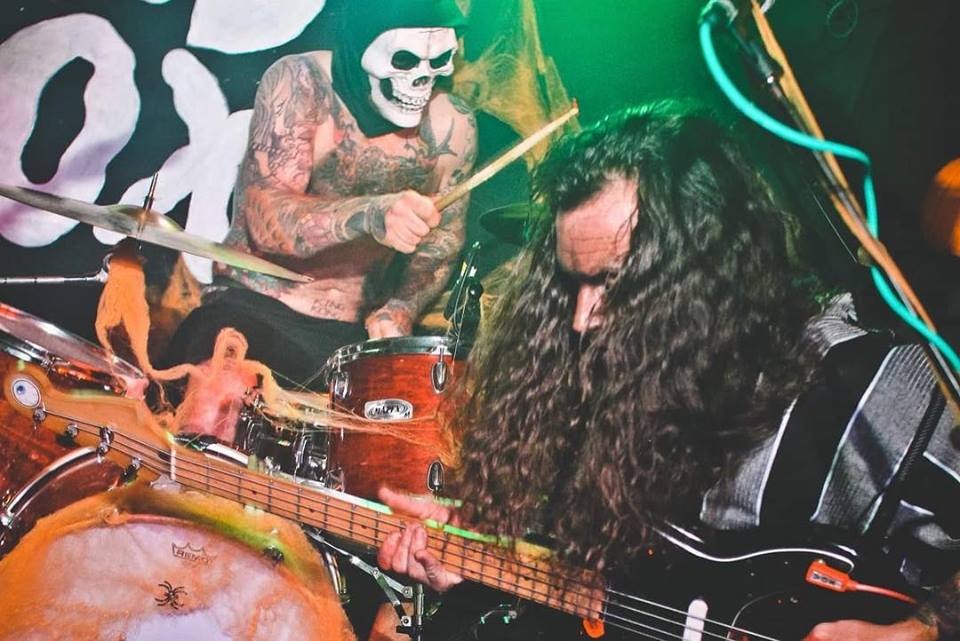 SKiNNY MiLK are a Brighton psychedelic garage punk duo that was formed in 2016 by Johnny Hart and Tim Cox. From their inception, the guys have toured relentlessly and at the same time they have been releasing multiple EPs and singles in between their hectic tour schedule. Heading back into the studio to record their upcoming release, SKiNNY MiLK are showing no signs of slowing down. – just like their music! 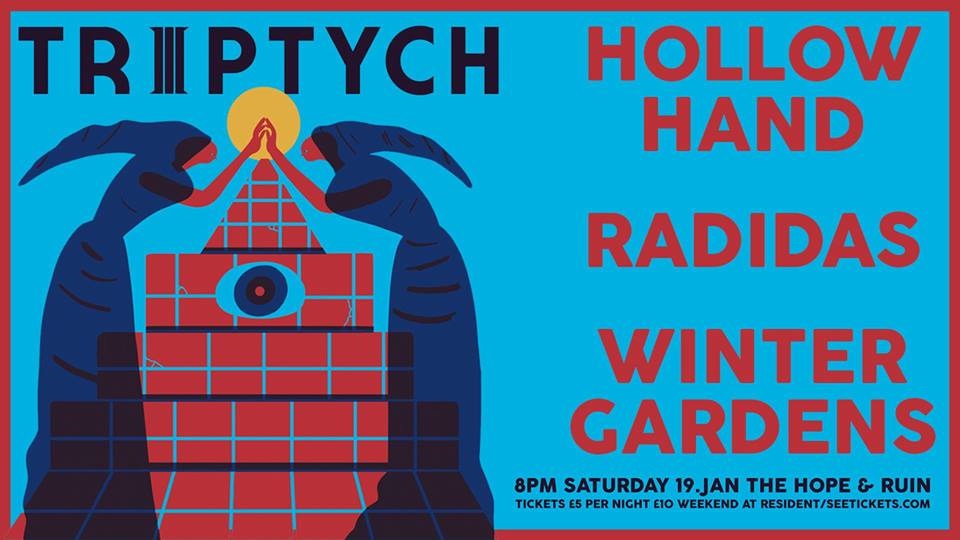 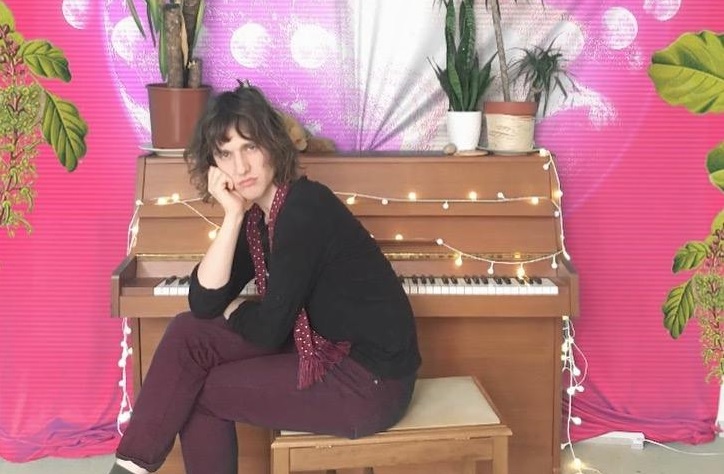 Hollow Hand hail from Brighton and is spearheaded by Max Kinghorn-Mills. The new album, ‘Star Chamber’, was produced by Pan Andrs and Atlas Shrugs at Cosmic Ocean. Occupying a space between Super Furry Animals and Soft Machine – Hollow Hand’s debut album was released in October 2018, via Talkshow Records. Anger has always been a natural response to injustice. But the work of Syd Barrett, The Grateful Dead (both acts who have influenced Hollow Hand) and countless other artists in the 1960s/1970s demonstrate how revolt can be achieved through aesthetics as well as the primal. 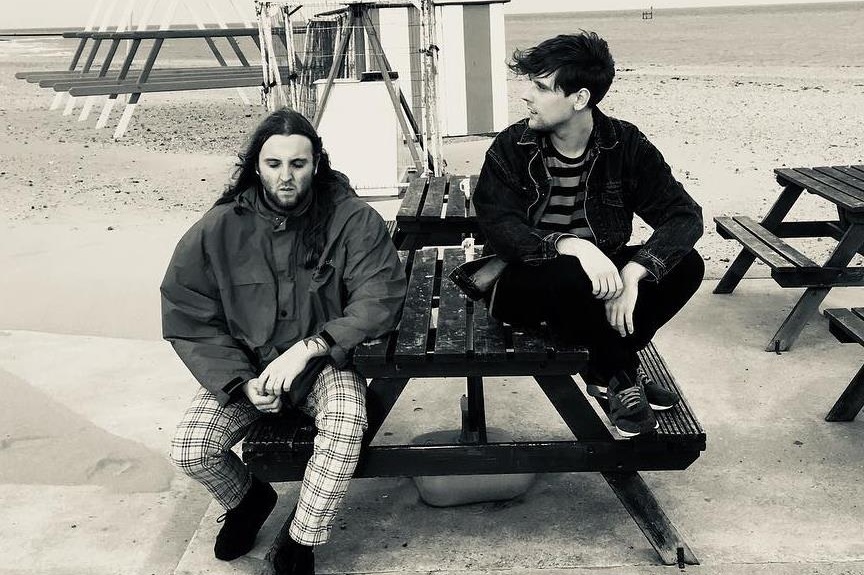 RADIDAS are a Brighton based electronic two piece who creatively infuse contemporary dance music with underground psychedelia in order to create their unique and fresh vibrant sound. Listening to them can send you from thinking about comparisons with the Dr Who theme to the Cocteau Twins and across to The Horrors and the chillin’ out sounds heard during the early mornings in sunny Ibiza. As we said – unique and totally immersive. 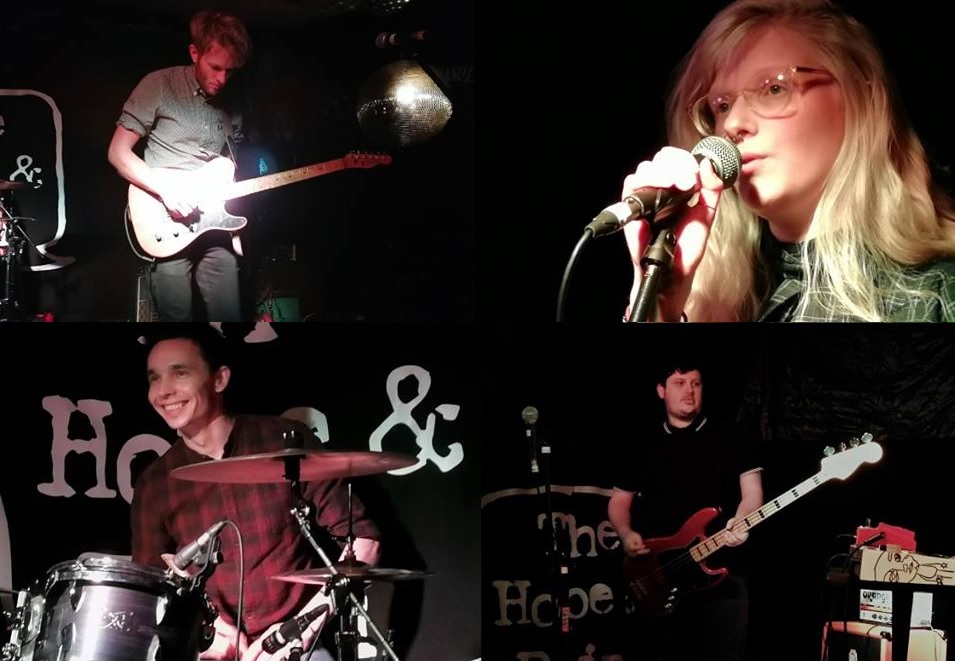 Winter Gardens have absorbed influences from 80’s post-punk, Factory, Postcard, 4AD, Creation era bands, and have developed their own ‘dream punk’ sound, with all the ethereal haze of shoegaze and dreampop with the energy of punk. The Brighton & Hove News music team saw these guys live in November and we reported….“Winter Gardens are a new Brighton area based 4-piece act made up of Ananda, Jim, Matt and Alex and the guys were this evening performing only their third ever gig.
I must confess that I hadn’t previously heard of the band prior to tonight and whilst my colleague and myself were watching them organising their equipment on stage, my colleague pointed to Jim’s guitar. There were three letter on it and instantly we both knew that we were going to like this band. Turns out that we really, really, really like this band after hearing their six song set. Oh and those three letters were KLF”. 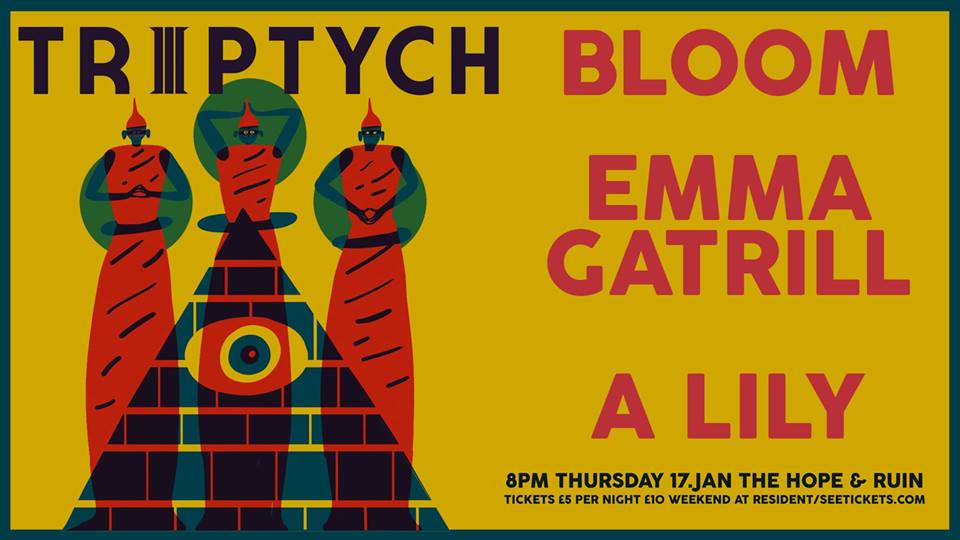 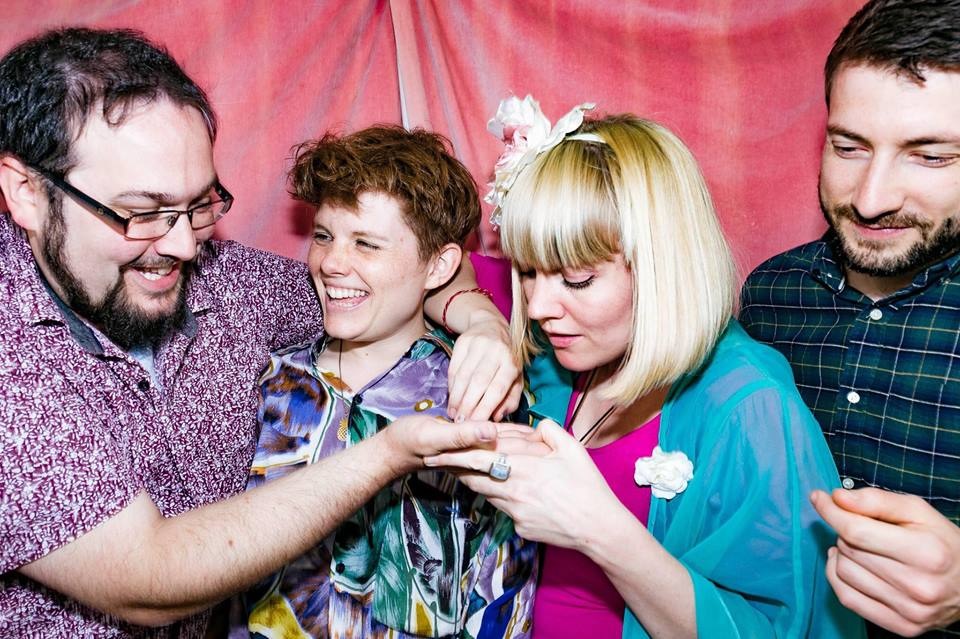 Bloom are a two girl-two boy outfit, that includes Megan Clifton host of ‘The Brighton Guide’ show on Radio Reverb. The Brighton & Hove News music team saw these guys live in November and we reported….“This evening, Bloom made the most of their perfect harmonious duo girl vocals, that are very pleasant indeed. Their sound is indie pop, that my colleague reckoned was similar to The Sundowners that we had previously seen at the same venue. I’m not totally convinced myself – maybe you can decide? Check out their locally shot video for ‘Letting Go’ HERE. Their best track on the night for me was called ‘Escape’ and is going to have the midas touch from the hands of AK/DK’s Ed, so it’s bound to be absolutely fab!” 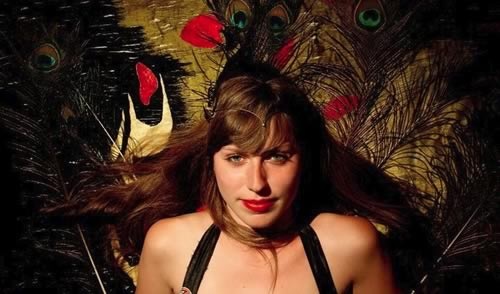 Emma Gatrill is a multi-instrumentalist based in Brighton and the music team of the Brighton & Hove News have seen her live several times. Our last outing we reported….“Next up was Emma Gatrill. I knew we were in for a treat here as I had previously witnessed her talent at the Brighton Museum back in December. Emma’s glorious harmonies combine perfectly with her delicate harp to produce a unique and spellbinding sound whilst her musical partner Marcus Hamblett accompanies on electric guitar and pedal board. The set included a wonderful rendition of the very gentle ‘Space’ in which the audience were asked to lightly jangle their keys as an accompaniment. We were also treated to an amazing cover of Bjork’s 1996 single ‘Hyperballad’ which I would argue was an improvement on the original. Emma’s final track was the stunningly beautiful ‘Skin’. The recording cannot begin to do justice to this track, you absolutely have to hear it performed live”. 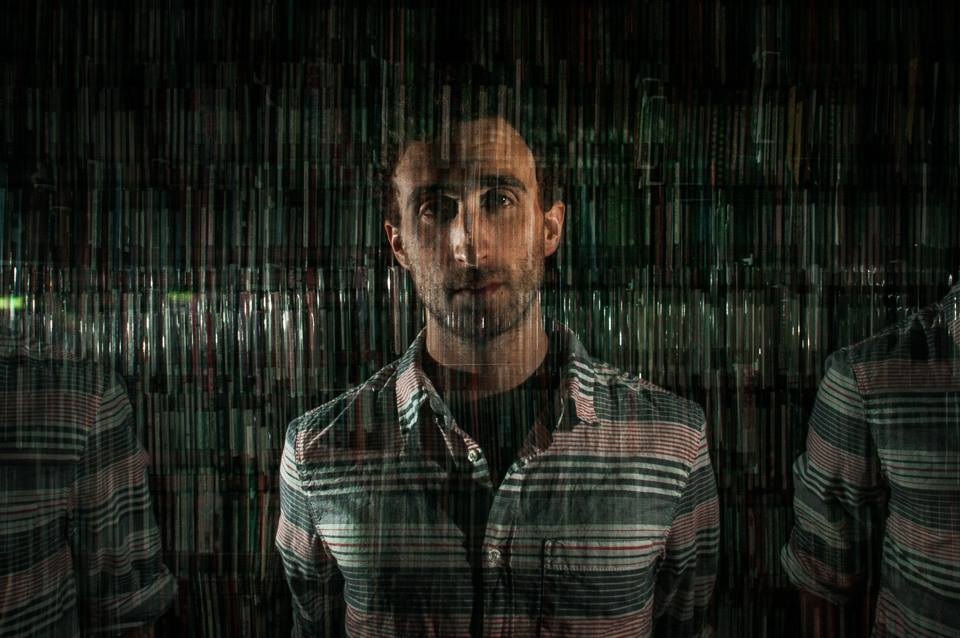 A Lily is based in Brighton and brings together influences as diverse as ambient drone, delicate indie-folk, pop songwriting, electronic music and modern classical, A Lily is a solo project from James Vella with a far-reaching net. James has released a handful of A Lily records with Blank Editions, Kingfisher Bluez, p*dis, Fierce Panda, Dynamophone Records and Sound in Silence among other labels. The son of a choral / operatic soprano and music theory lecturer, he grew up around music and saw his first record release as a teenager. Using the “A Lily” name to encompass all of his solo music, his releases have covered broad stylistic ranges, from dark alt-pop to piano solos to mechanically-hearted electronica to abstract avant-garde.

Triptych 2019 ticket information is available below.
You can purchase them for one, two or three days. They are just £5 per night or £10 for all three nights and are available from HERE and HERE.