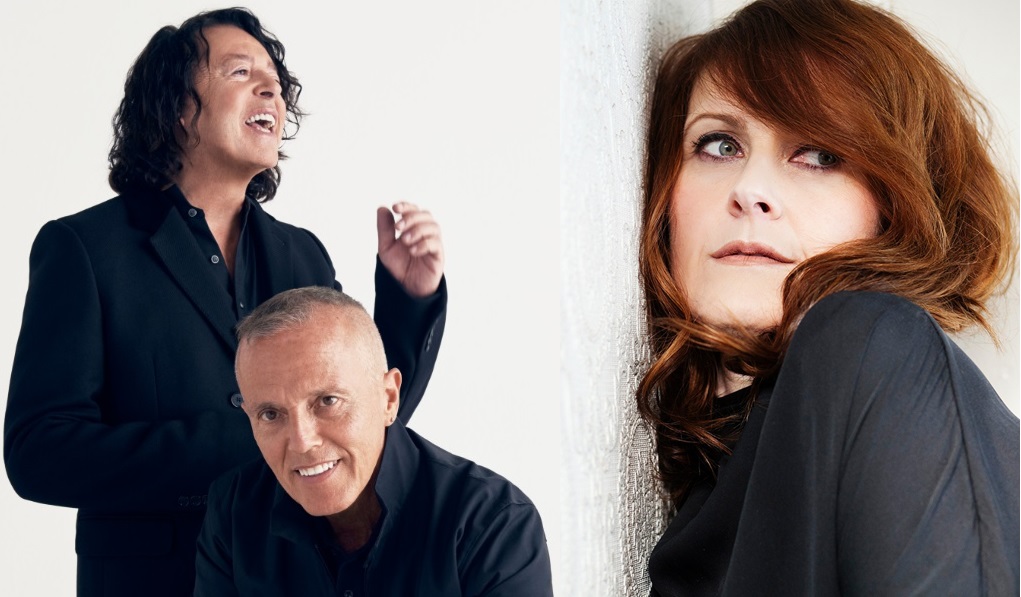 Finally after a 15 month wait, we were this evening lapping up the delights of seeing Tears For Fears and Alison Moyet perform live at a sold out Brighton Centre. The concert was rescheduled from Saturday 12th May 2018, having been initially announced on 29th October 2017.

The original plan was to coincide with the release of Tears For Fears ‘Rule The World: The Greatest Hits’ album which hit the shops and download stores on 10th November 2017 and to plug Alison Moyet’s ‘Other’ album which had come out in June 2017. This was Tears For Fears first UK and Ireland Tour since 2005 and thankfully the ‘Rule The World Tour 2019’ had included a Brighton concert. 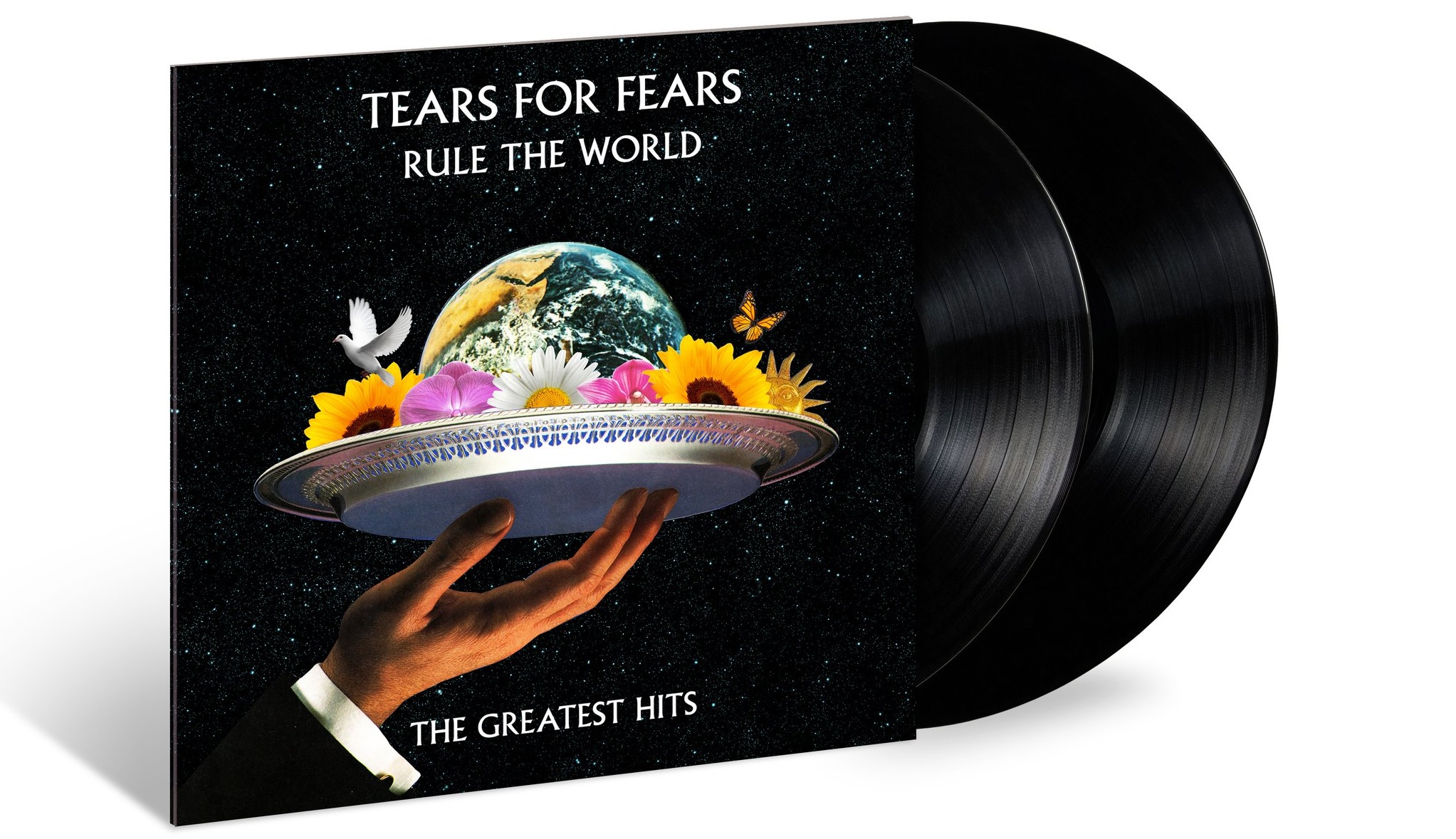 Tears For Fears ‘Rule The World: The Greatest Hits’ album

This evening the guys admitted that they even had to Google to find out the last time that they had played in Brighton and informed us that it was 36 years ago and embarrassingly drew the attention to the fact that their backing vocalist Carina Round hadn’t even been born then. If they are referring to their 4th April 1983 gig at the Top Rank Suite then I was there and still have my ticket! 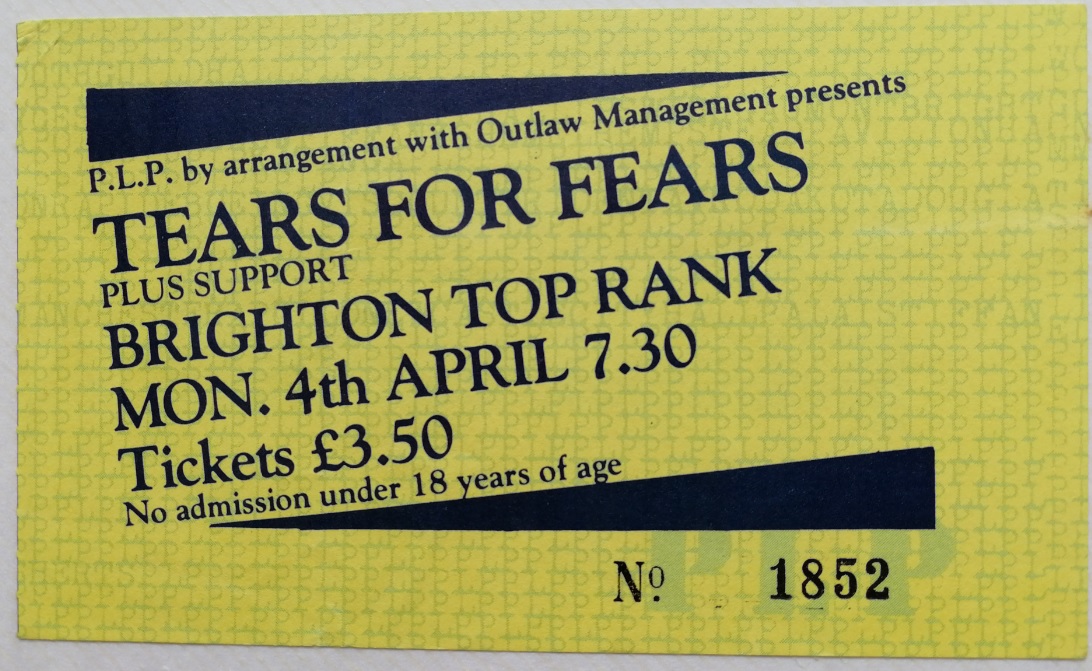 Mind you it has been even longer since I have seen Alison Moyet perform live, as I was one of the lucky ones to have seen her live on stage at Brighton Dome on Wednesday 10th November 1982 as one half of pioneering electronic duo Yazoo with Vince Clarke who had recently departed Depeche Mode. I have also kept that concert ticket as a souvenir. 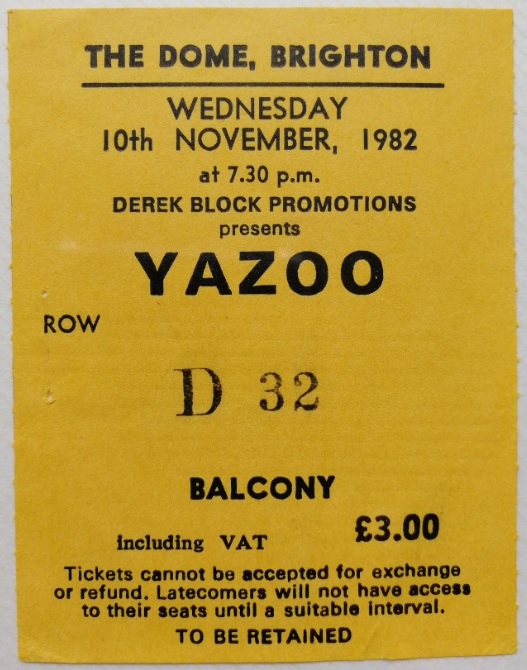 Their short-lived alchemic partnership produced two seminal smash hit albums, the No.2 ‘Upstairs At Eric’s’ album in 1982 and the No.1 ‘You And Me Both’ in the following year in 1983. They then disbanded at the height of their success. Incidentally both albums will be coming out on 180g black vinyl on 29th March 2019.

Following a furious bidding war, the three-times BRIT Award-winner and Grammy-nominee, signed to CBS and an extraordinary solo career began with the launch of Moyet’s No.1 chart-topping album ‘Alf’ in 1984. Follow up album ‘Raindancing’ appeared in 1987 and hit No.2 in the official album charts. There have been a further seven studio albums including the No.7 ‘Voice’ album in 2004 and ‘The Minutes’ album in 2013, which climbed as high as No.5.

As well as completing acting runs in both ‘Chicago – The Musical’ and ‘Smaller’ (with Dawn French) for which she co-wrote the production’s song material, Moyet memorably performed at Live Aid, released the live DVD recording of ‘One Blue Voice’ and is a Nordoff Robbins Icon Award recipient. Her latest album from 2017 is entitled ‘Other’ and peaked just outside the top ten. 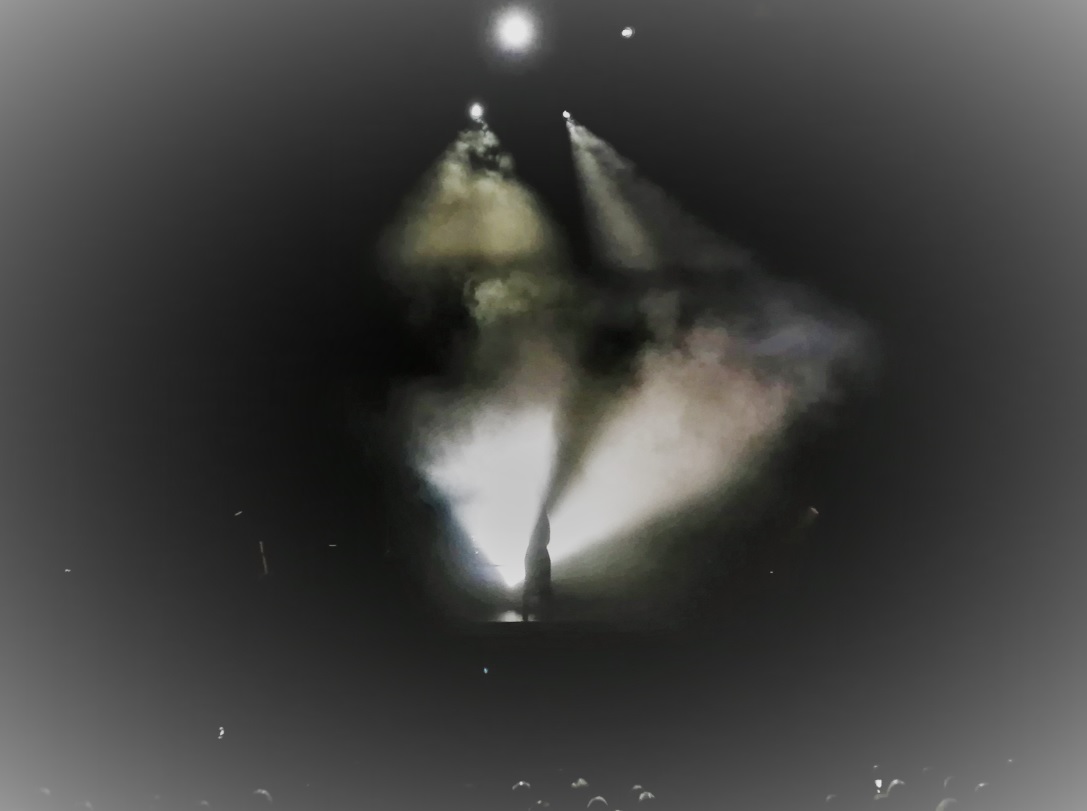 Tonight, the Brighton Centre crowd were treated to an eleven song set, which started by bathing the stage in ultraviolet light during her opener ‘I Germinate’. In a style not too dissimilar to Shirley Bassey, Alf (aka Alison) belted out “I’m here. I germinate I’m here. I germinate”. This was a really promising start and the set got better and better. Moyet was accompanied on stage by Sean McGhee (synths/vocals) and Paul Jones (drums). 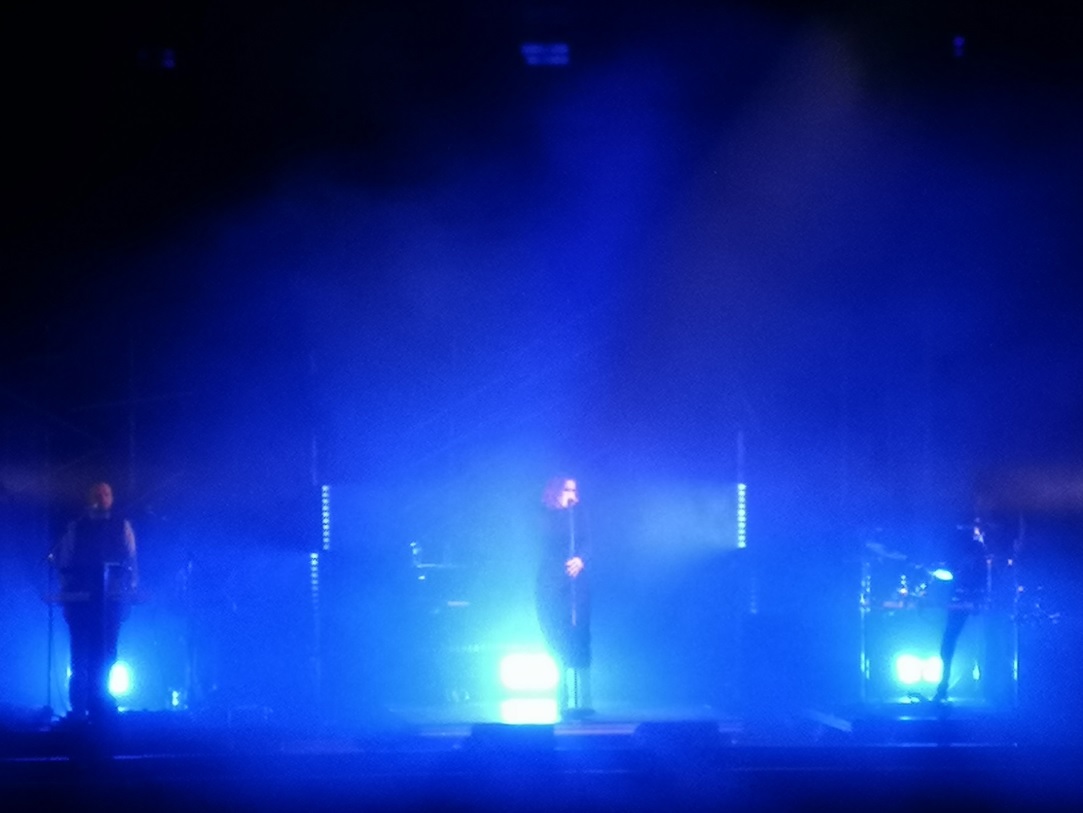 Next up was the Yazoo track ‘Nobody’s Diary’ which made me really pleased and also a large majority of the thousands of music punters in the venue. I wasn’t sure if she was going to perform any Yazoo tracks. I needn’t have worried as a further three turned up including my fave Yazoo track ‘Situation’, which I purchased on 12” US import back in the day as it included the awesome ‘Dub Mix’ which is as good as synth-pop can possibly get. If you are trying to locate this vinyl platter then it was listed as just Yaz for legal reasons. In fact, I do believe that they are known in the USA as Yaz. 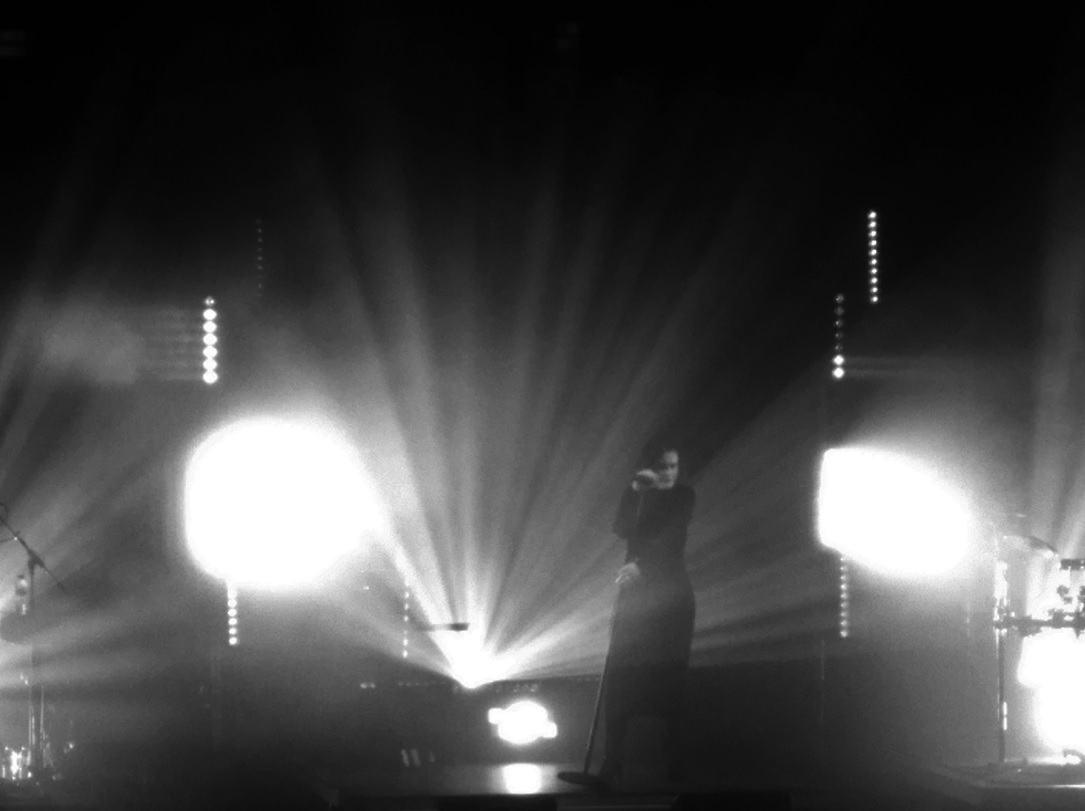 The mainly middle-aged audience were well behind Alf tonight and particularly enjoyed being informed that she has actually been living in Brighton for the past seven years. Brighton has been a big inspiration to her and she informed us the her song ‘The Rarest Birds’ “is a paean to LGBTQ, to Brighton, to coming out after the darkest nights into the arms of those that delight in your flight. From me to you”. The video for the song was filmed in Brighton and features her daughter Caitlin Ballard and was directed by Steve Gullick and premiered on 20th July 2017. Watch the video HERE.

My colleague noted this evening that Moyet’s tune ‘The Sharpest Corner (Hollow)’ does sound rather similar to ‘I Hear You Now’ by Jon & Vangelis and I agree with him. All eleven tunes had now been performed and the crowd on all three sides gave her a standing ovation! Cracked it girl! She really enjoyed performing for us tonight and posted on social media that she was “So happy to play in Brighton. Our sound on stage, the best yet. Thank you neighbours and friends for sharing it with us. I loved tonight.” 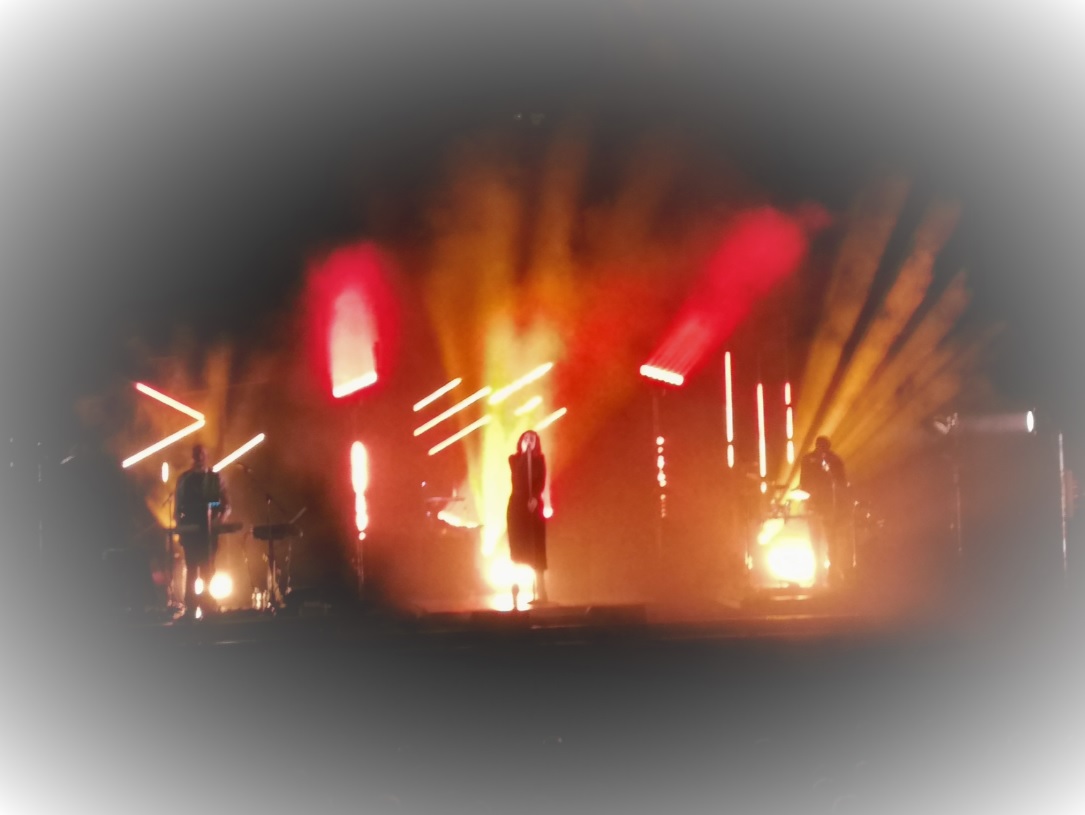 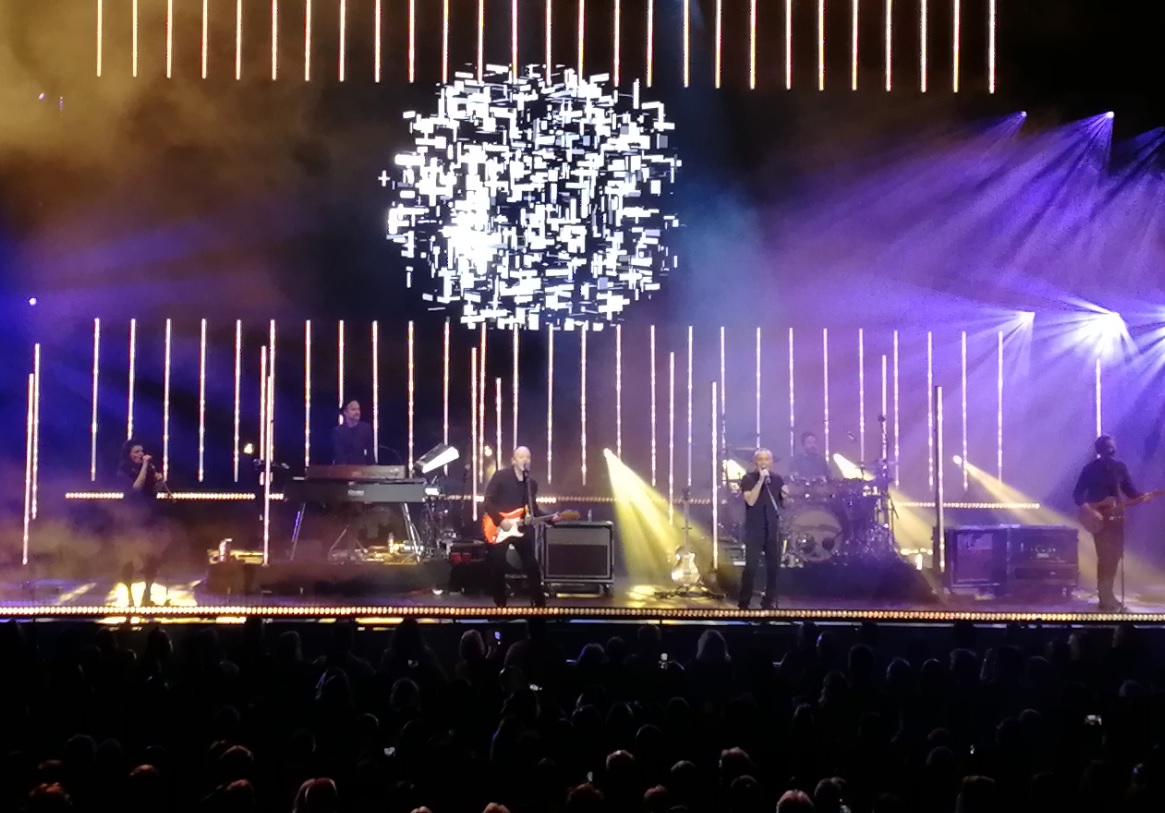 Having sold 30 million albums worldwide, performed to countless sold out audiences, and won various awards, Tears For Fears – Roland Orzabal (vocals, guitar, keyboards) and Curt Smith (vocals, bass, keyboards) – are one of the most influential bands to have come out of the UK. With a catalogue of classic albums namely the gold-certified debut ‘The Hurting’ (1983), quintuple-platinum BRIT Award-winning ‘Songs From The Big Chair’ (1985), and ‘Seeds Of Love’ (1989) and a string of huge hits, including classics such as ‘Everybody Wants To Rule The World’, ‘Shout’, ‘Mad World’, ‘Head Over Heels’, ‘Woman In Chains’, it was clear to us that the Brighton show was one not to be missed! 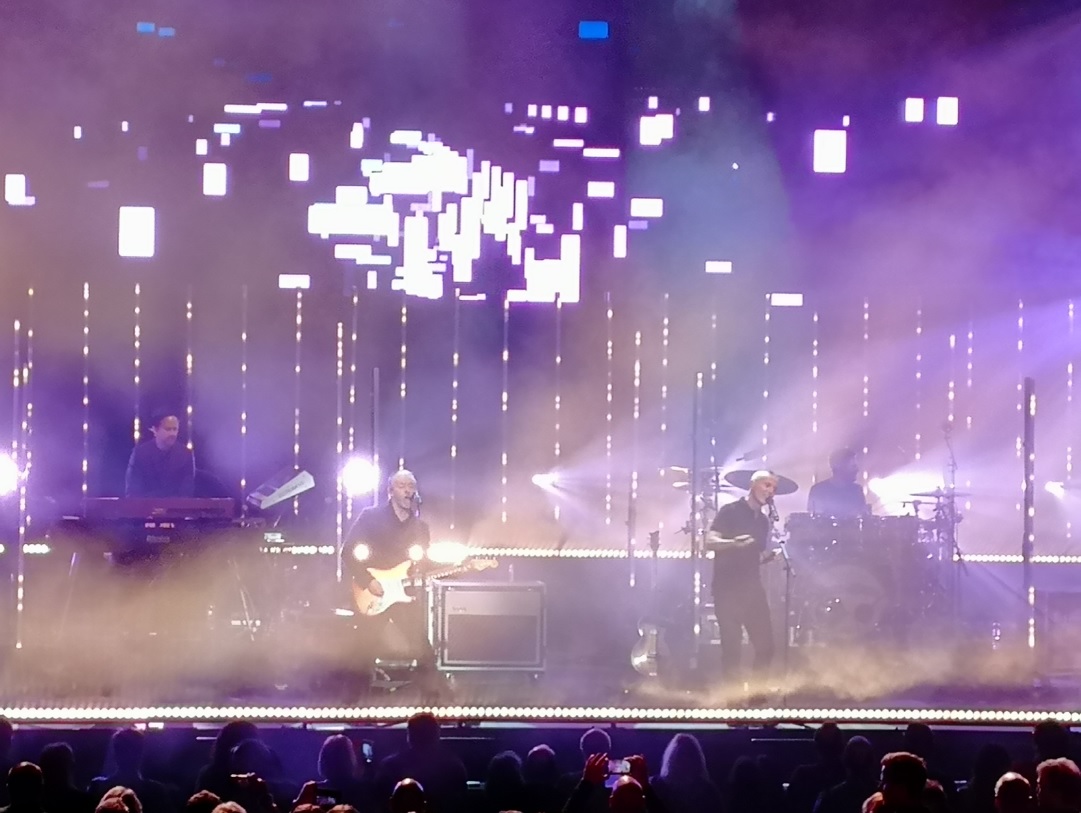 Beyond their own output, Tears For Fears have influenced many artists today including being sampled by Kanye West, The Weeknd, David Guetta, Drake, and more, while also being covered by Lorde, Adam Lambert, Gary Jules, and Disturbed, to name a few. Meanwhile, classic songs figure prominently everywhere from ‘The Wire’ and ‘Donnie Darko’ to ‘Straight Outta Compton’ and ‘Mr. Robot’. 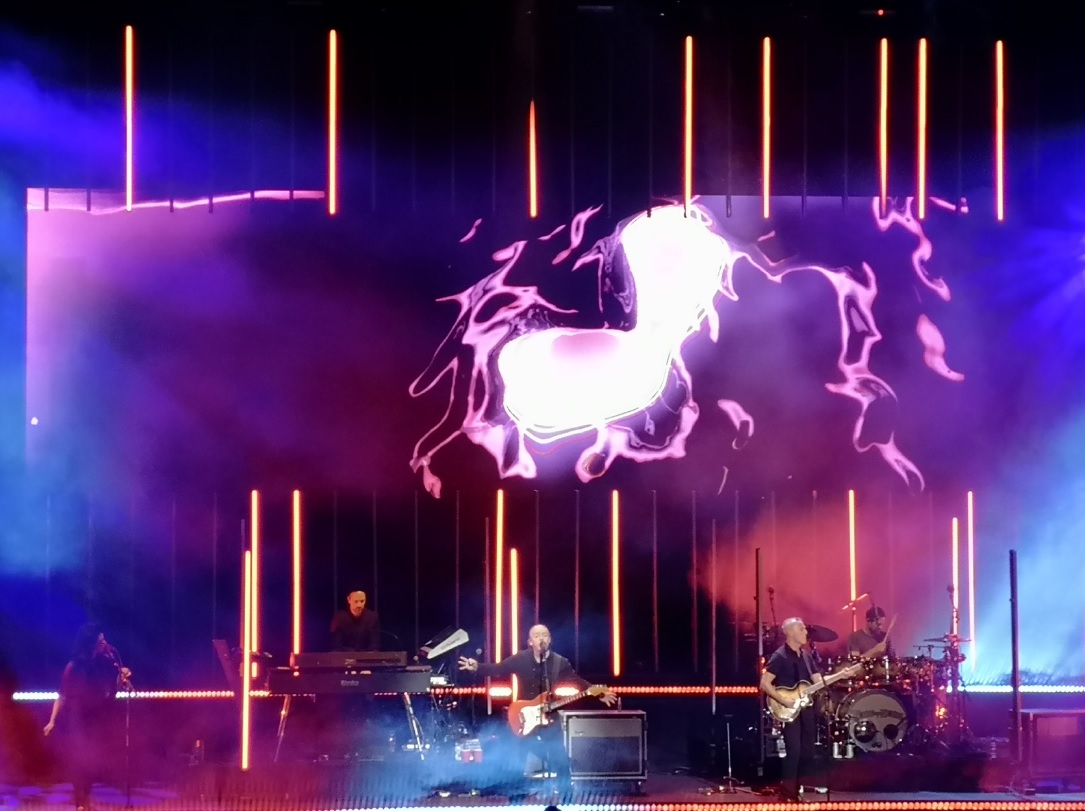 Their ‘Everybody Loves A Happy Ending’ album was released after a 15 years hiatus in 2004, which rekindled the creative fire between the duo. Breaking another quiet spell, the boys engaged in a three-year touring whirlwind across North America, Japan, South Korea, Manila, and South America beginning in 2010. 2013 saw them return with their first recorded music in a decade: a cover of Arcade Fire’s ‘Ready to Start’. 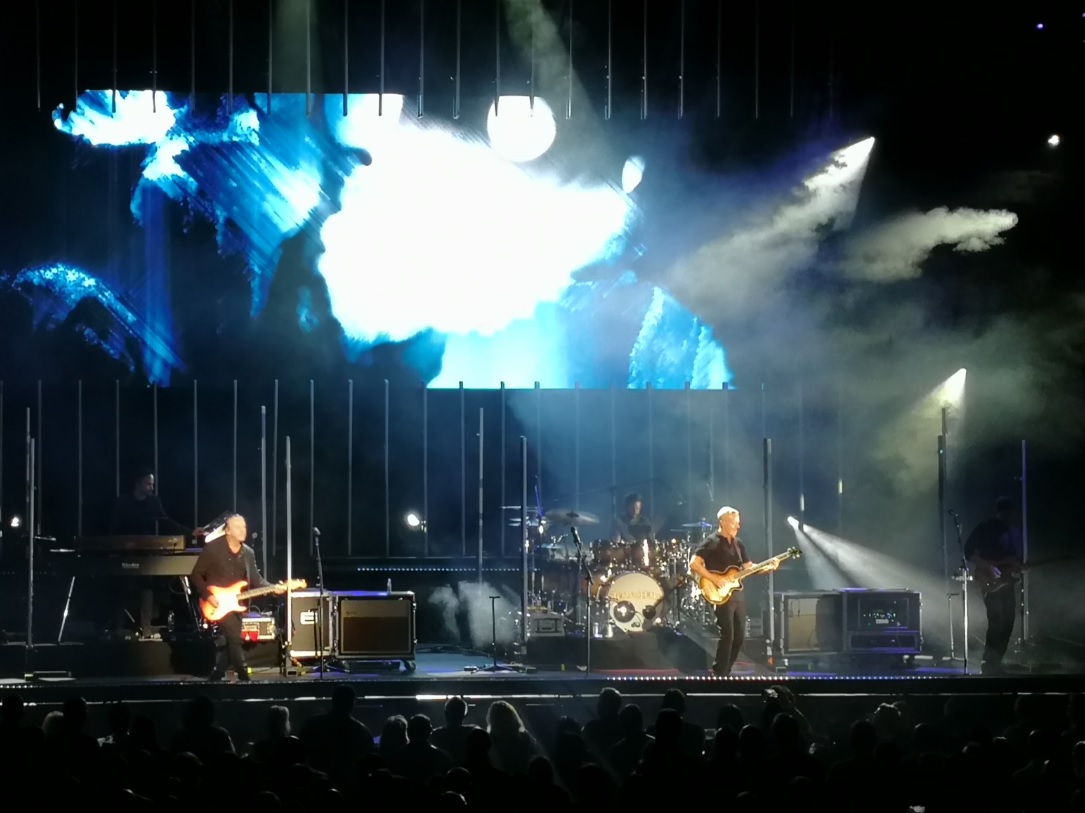 It was finally time for Roland and Curt to take to the vast Brighton Centre stage. The Lorde intro tape began and on strolled the guys and their four piece band who are Charlton Pettus (guitar), Jamie Wollam (drums), Carina Round (vocals) and Doug Petty (piano/keyboards and Brighton & Hove Albion fan!). 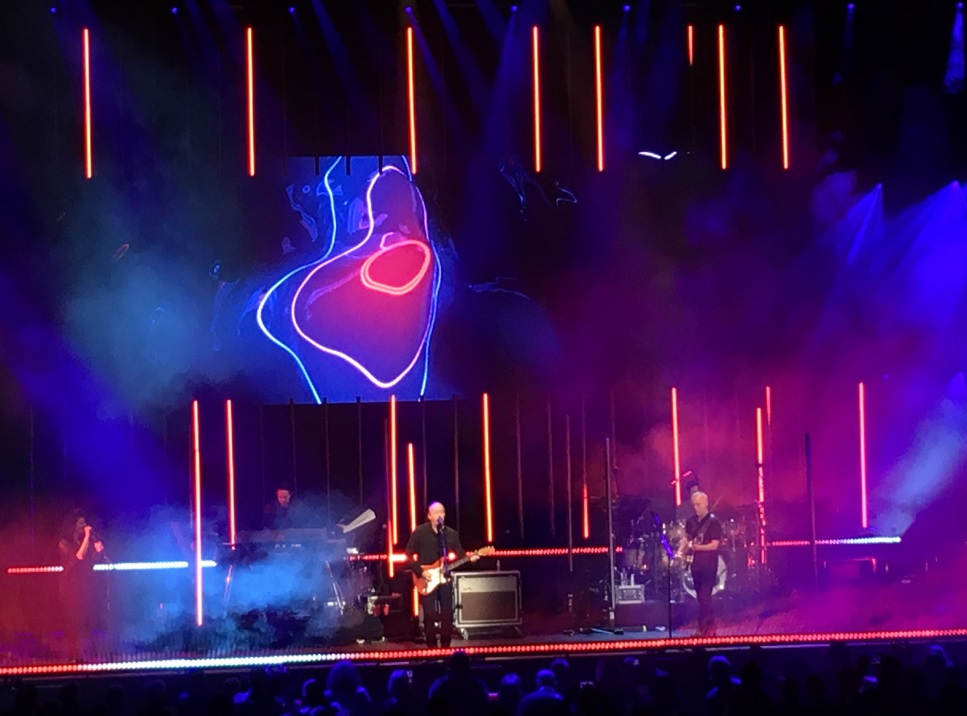 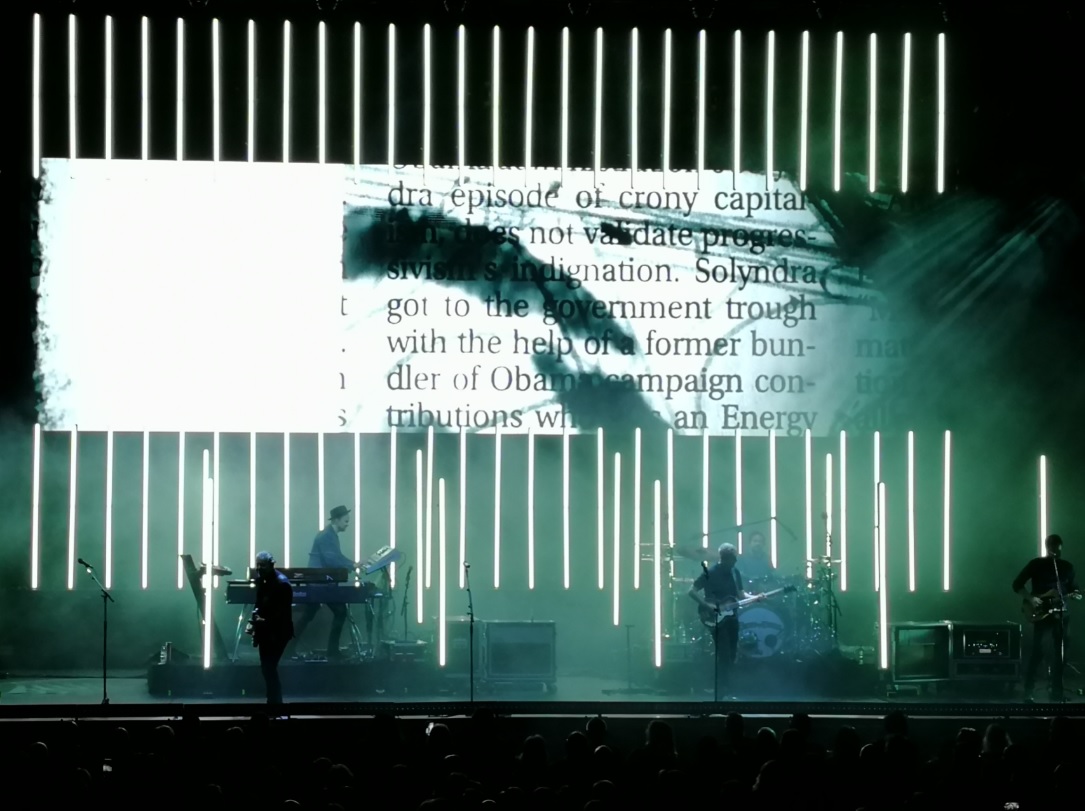 It was obvious that the lights were just as impressive as Alison Moyet’s had been, but ‘T.F.F’ had the added bonus of crystal clear graphics beaming above their heads, the like of which I hadn’t seen since the last fabulous Kraftwerk and Orbital tours. 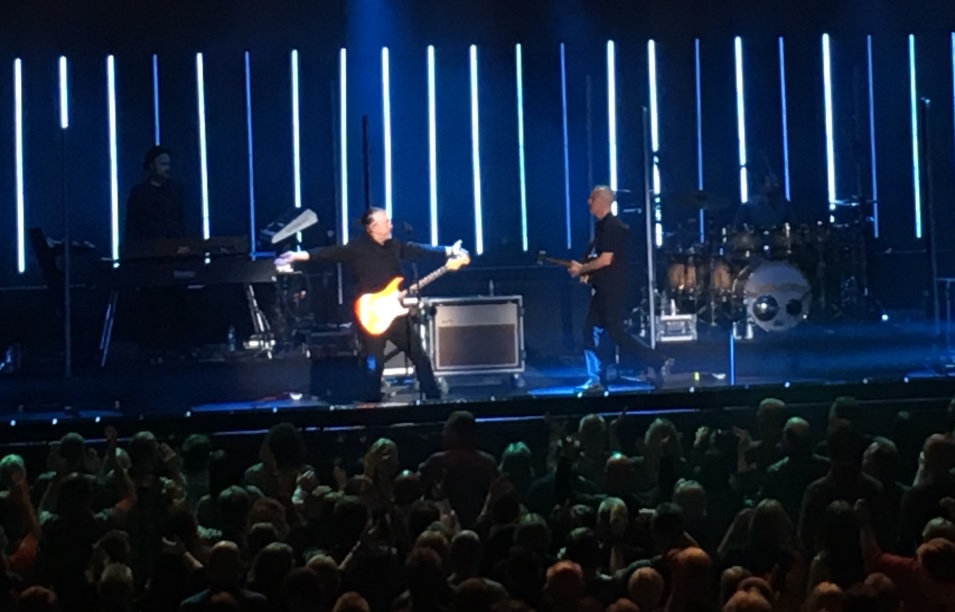 Next up was ‘Secret World’ which was culled from ‘Everybody Loves A Happy Ending’ album. This had I noted elements of Wings fab hit ‘Let ‘Em In’ within this number. The hits kept coming with the arrival of the Beatles-esque ‘Sowing The Seeds Of Love’ and ‘Pale Shelter’. 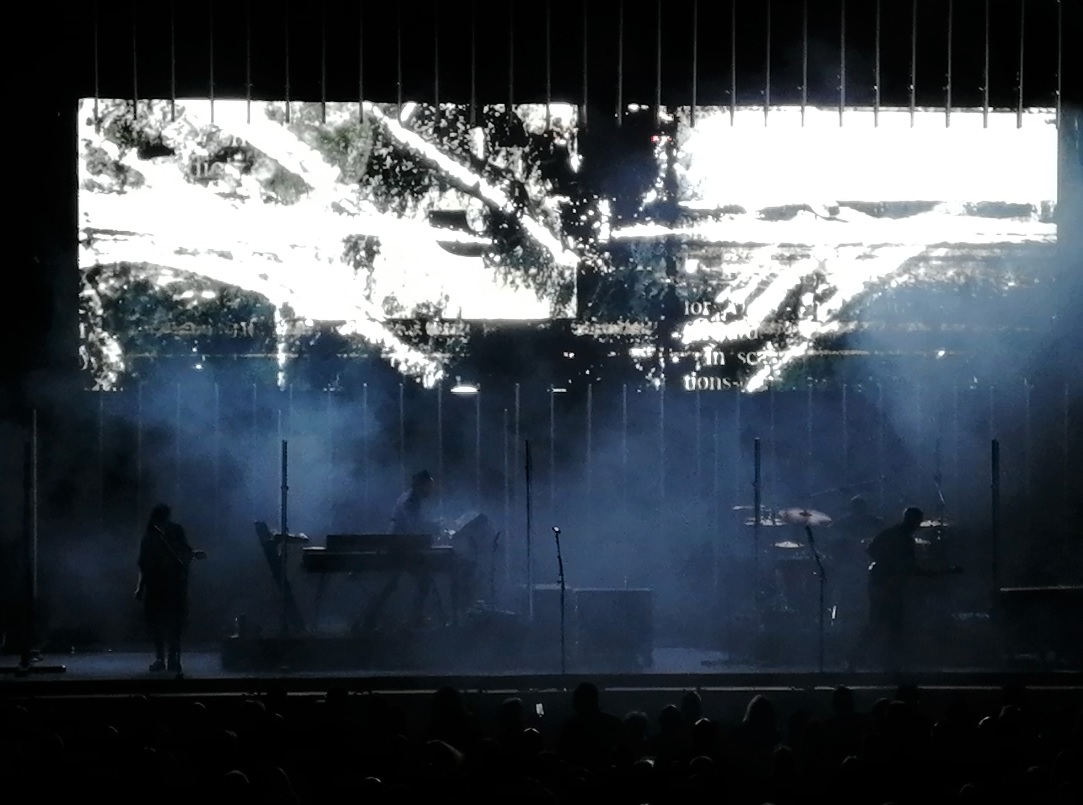 Although ‘T.F.F’ hadn’t performed in Brighton for aeons, Curt informed the crowd that in fact a couple of years ago he had brought his family over from Los Angeles, where he now resides, which is a long way from their early beginnings in Bath. They had apparently come on holiday in Brighton as his kids wanted to check out the places that famous YouTubers such as Zoella and her brother Joe Sugg had filmed their videos. I’m reliably informed by my kids that these guys are megastars along with PewDiePIe, KSI and Joe Weller and that a large proportion of these ‘top stars’ are from or gravitate to live in Brighton. This must be seriously cool for their followers like Curt’s kids. Tonight’s middle aged crowd were in the main not as enamoured. 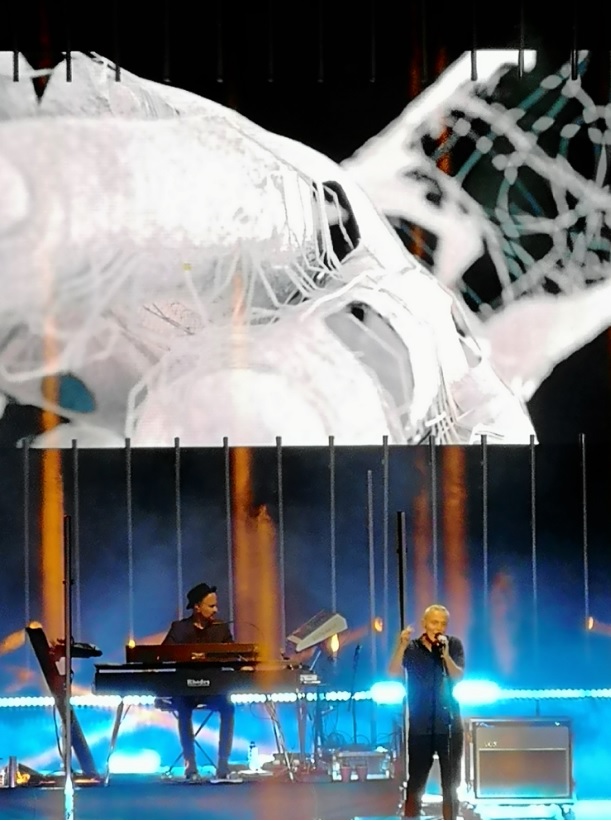 Along came four tracks from their brilliant debut album ‘The Hurting’, which included ‘Change’, ‘Mad World’, ‘Memories Fade’ and ‘Suffer The Children’. On ‘Suffer The Children’ Carina took on the vocal duties and the crowd really appreciated this one as I understand that it hasn’t been played live for years, so that was a fab choice to play it again first in Brighton. 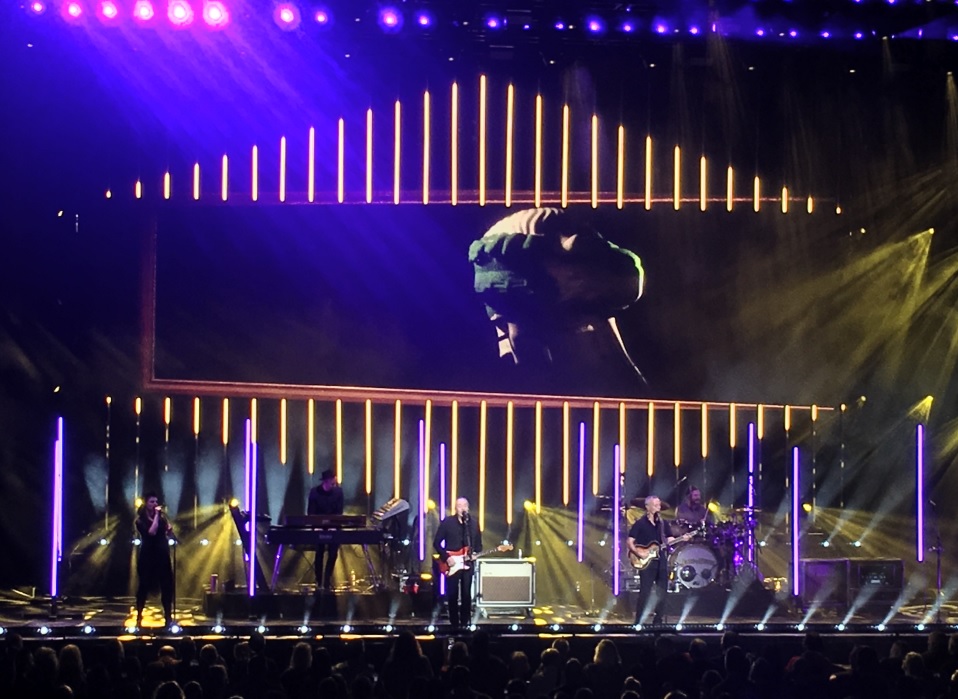 For me personally we were going along just fine until ‘Badman’s Song’ arrived, which seemed to bring the mood down a tad. It’s quite a long indulgent number and could have possibly been replaced by a couple of tracks such as ‘The Hurting’ and ‘Mother’s Talk’, both of which didn’t get an airing tonight. But hey, at the end of ‘Badman’s Song’ the crowd gave a big applause. 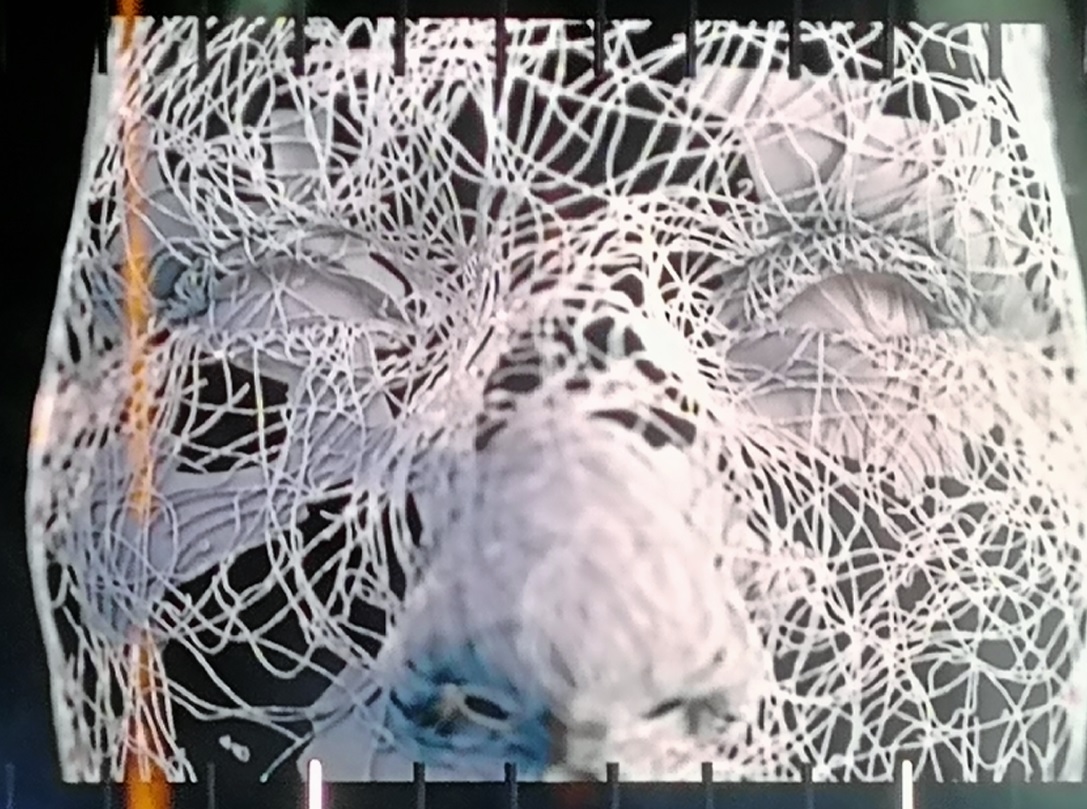 Fabulous graphics at the Tears For Fears Brighton Centre 04.02.19 gig

The final track before the encore was ‘Head Over Heels’ / ‘Broken’ and then after fourteen songs, they trundled off stage, only to return to play just one more tune, namely ‘Shout’. I should have been grateful for this, but I was aware that in fact that the shows prior to Brighton had carried an additional track mid set, that being ‘T.F.F’s cover of Radiohead’s ‘Creep’ as found on the expanded edition of their 1995 album ‘Raoul And The Kings Of Spain’. Tonight the tune was scheduled to be played as the first track of the encore but it was sadly omitted and so we had only fifteen tracks instead of sixteen. There was time to play the song as the gig was due to finish at 10:30pm but ended around 15 minutes earlier than that. This is my only gripe about a fab concert that was well worth the wait. Hopefully we will be seeing ‘T.F.F’ playing in Brighton pretty soon. 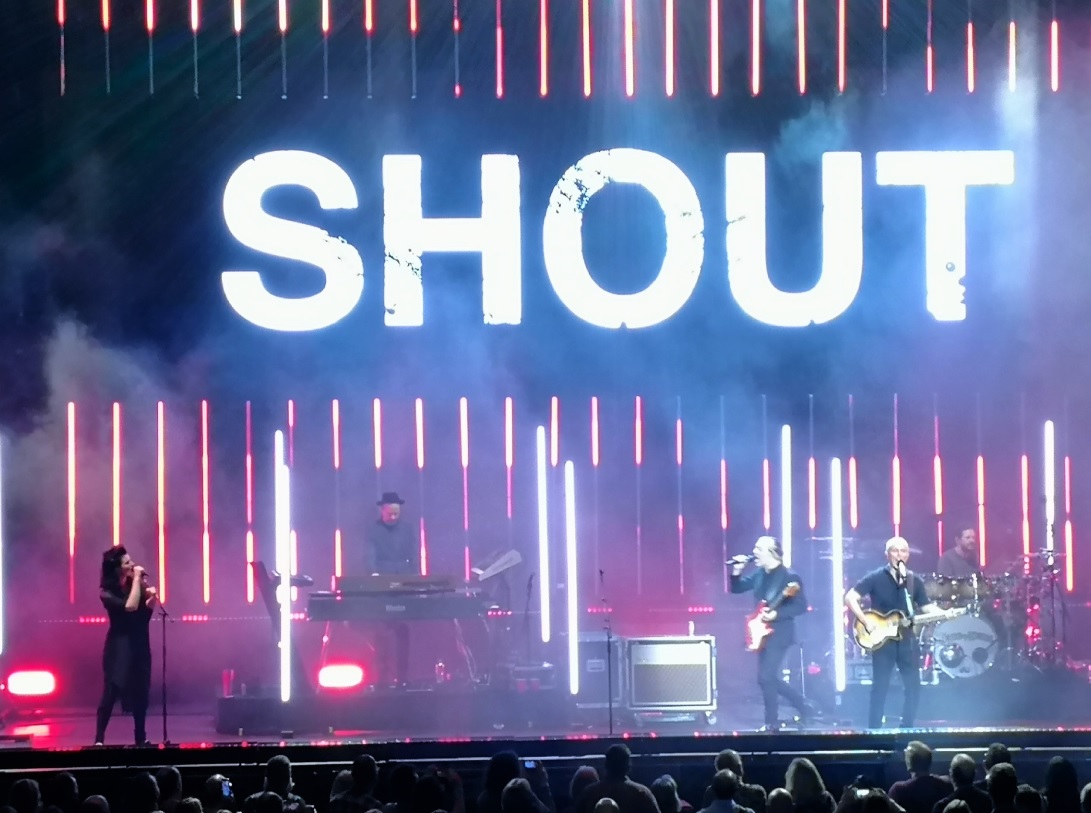 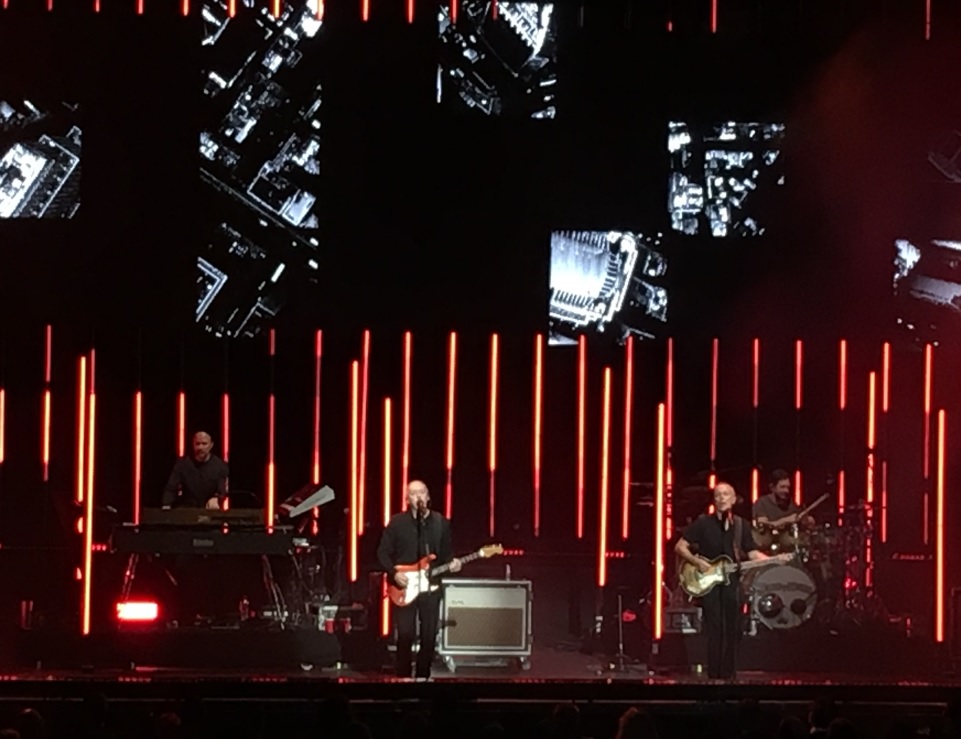 For more information on Tears For Fears, click HERE. 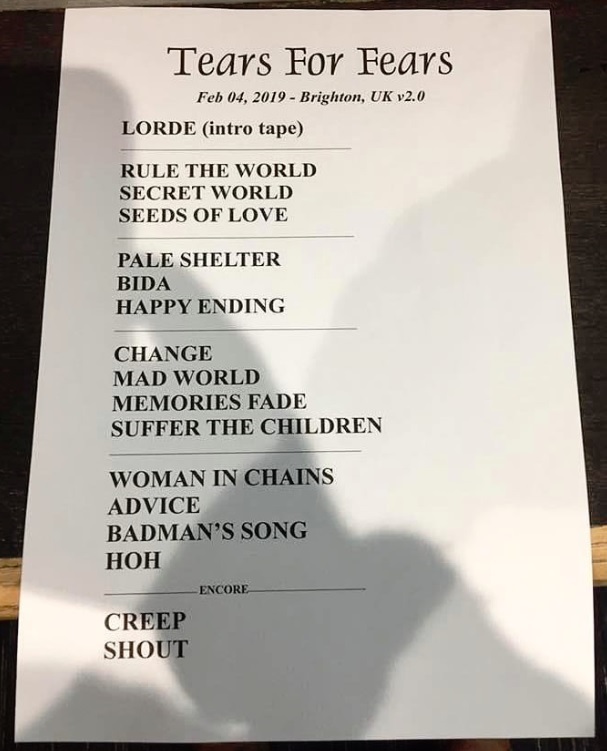 The proposed Tears For Fears setlist 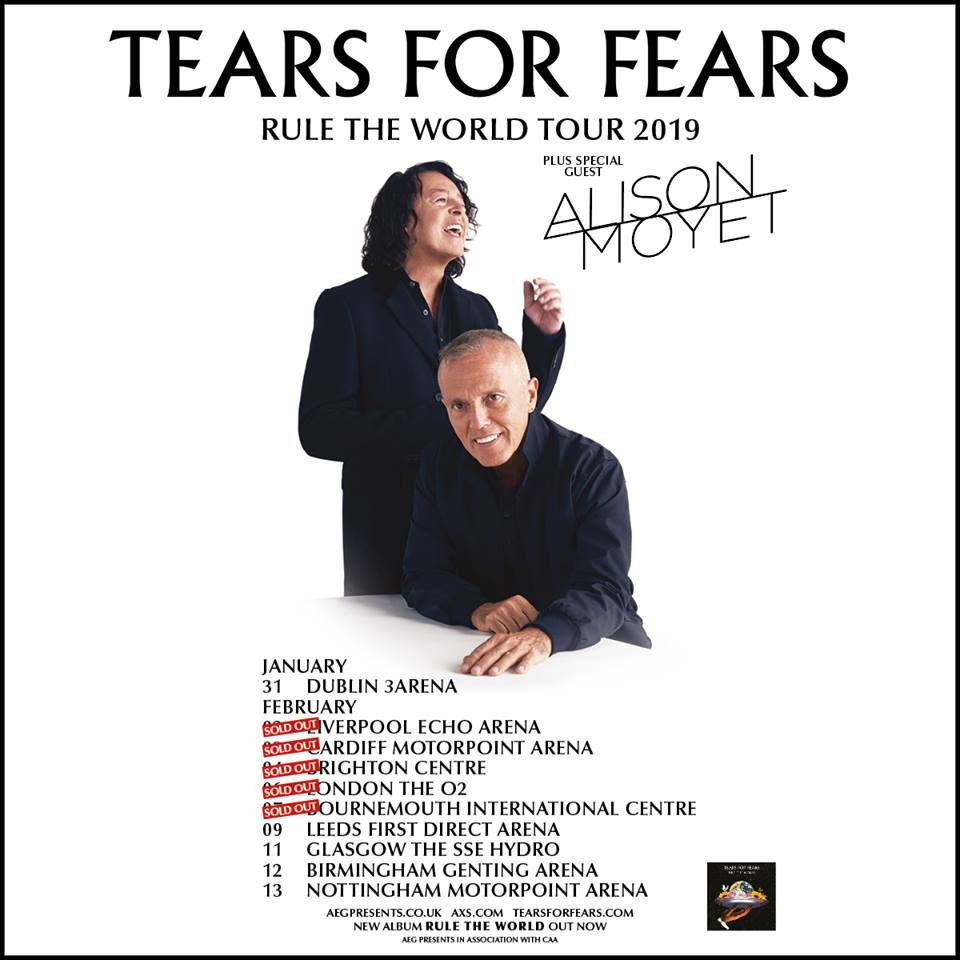