Neighbours are against plans to knock down a bungalow and replace it with two detached houses. 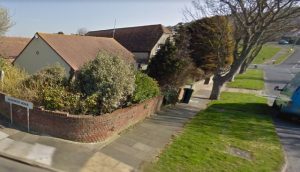 Tony Antoniades has applied for outline planning permission for the plot on the corner of Ridgewood Avenue and Lustrells Crescent in Saltdean.

It is next door to the grade II listed building which was Newlands Barn and which is now converted into homes.

Officials are advising Brighton and Hove City Council Planning Committee to approve the application when councillors meet on Wednesday (3 April).

Neighbours raised concerns about the historic building, the size of the plot and the loss of privacy.

A Saltdean Vale resident listed as M Thomas was concerned about lost trees, overcrowding and the impact on the old barn.

He said: “Trying to squeeze two large houses on a single bungalow site will look unsightly and odd.

“This proposal is totally out of character next to a 200-plus-year-old barn and stable which are part of Saltdean’s heritage.”

Ridgewood Avenue residents, listed as Mr and Mrs Wheeler, described themselves as objecting in the “strongest terms”.

They said: “It was impressed on us that the barn itself was a listed property dating back to medieval times and the new bungalows were built on condition they will retain the unique style complimenting the barn.

“We were told to keep the front garden as an open plan area and nobody would be allowed to alter the character and overall appearance of the bungalows by adding another floor.”

The council’s heritage team said that the design was acceptable and described the bungalow as “of no historic value”.

The Planning Committee is due to meet at Hove Town Hall on Wednesday (3 April). The meeting is scheduled to start at 2pm and should be open to the public.