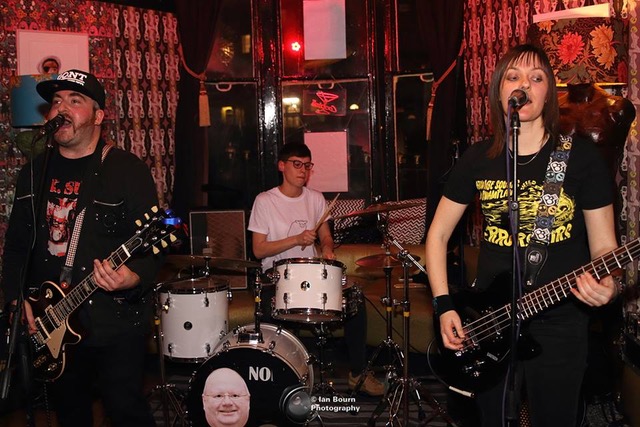 Tonight’s gig was a short journey through to Regency Square to the Hotel Pelirocco for the launch of the third EP by Cockwomble entitled ‘Conspiracy’. I hadn’t been to this venue before and was intrigued as to what might be in store for me. I was looking forward to seeing the support acts Who Killed Nancy Johnson? and the UK Subs frontman Charlie Harper as well as the main act, Cockwomble.

Cockwomble are a three piece post punk band consisting of Ali Gaven (lead guitar/vocals), Victoria Smith (bass/vocals) and Leah Dennison (drums). Victoria is also known for playing bass in the awesome all female band “The Ramonas”. I was fortunate to see them and review the last gig of their UK tour at Lewes Con Club – See HERE.

I was ready to have a great night as I had previously listened to Cockwomble’s two other EP’s and really enjoyed them. These are ‘Henchman’ and ‘All The Money! None Of The Style’. 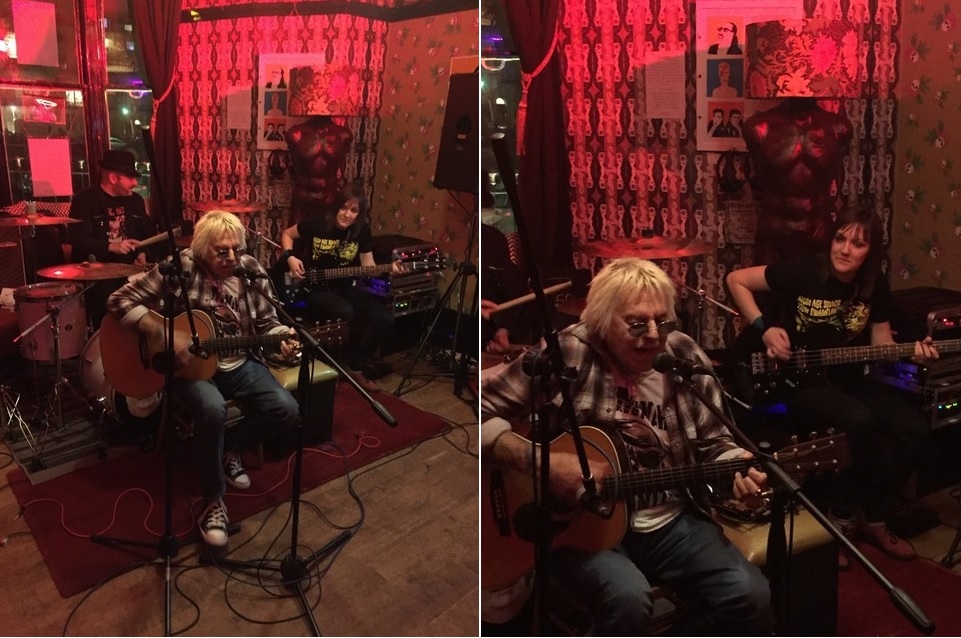 First up tonight was Charlie Harper who is the legendary UK Subs frontman. I have seen Charlie’s acoustic sets a number of times and he always delivers a great selection of our favourites. The small venue was very busy and we were all looking forward to this. Charlie came on to great applause from the crowd and his first song ‘Stranglehold’ had us all singing along. It’s always great when everyone knows the words and the venue being so intimate made this very special. Great applause followed and then Charlie performed ‘Little Black Crow’, which is from Charlie’s latest solo album of the same name – more info HERE.

Next up ‘Rebelion Song’, which everyone knew and we all accompanied Charlie through this one. Charlie upped the tempo next with ‘CID’ the first track of the seminal UK Subs album ‘Another Kind Of Blues’, which is 40 years old this year. Just brilliant! I found myself totally drawn in to the performance, which was absolutely brilliant. ‘Streets Of London’ up next, again we were all accompanying Charlie with the words. The next three songs were all UK Subs favourites ‘I Live In A Car’, ‘Tomorrows Girl’ and ‘Warhead’. For the third song ‘Warhead’, Charlie called out for Ali and Victoria from Cockwomble to join him on stage where Ali took the drums, Victoria on bass and of course Charlie on acoustic guitar and vocals. It was a great fun version of the tune. This was a such a brilliant start to the evening. Thank you Charlie. 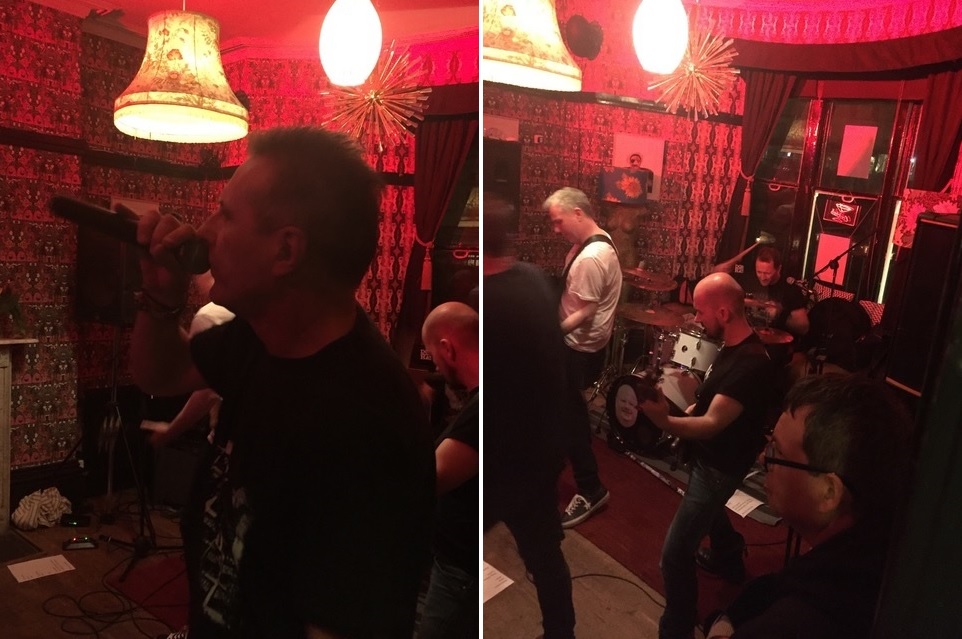 Second up tonight were Who Killed Nancy Johnson? who are Stefan Ball (vocals), Pete Moulton (guitar/vocals), Mark Wren (drums/vocals) and Dawid (bass) who joined the band January 2019. The band came down from Reading in order to play here tonight. Stefan planted himself right in the middle if the main room and asked us all to move closer commanding attention from everyone at the bar and launched us straight into opener ‘Rothmans’. I hadn’t heard this band before tonight and I have to say that I really love the sound. It is as they describe on their website “Think Wire, Dead Kennedys, Killing Joke and you’ll be somewhere in the ballpark of where WKNJ roots lie”.

Next up was ‘Strip’ and straight into ‘Alien’, ‘They Reap‘, ’12XU’, and ‘Body’. Stefan is a great performer and deliverer for this band and he is rather captivating to watch. The set continued and it turned it up another notch with ‘Who Killed Nancy Johnson’ and ‘Pretending To Like People‘ and the rousing ‘Blood In The Soil’ finish off an amazing set. I met them all after the set and purchased the CD album they have released and also a Tee Shirt with all the cash going to ‘Crisis’. So glad I made it to this one tonight. 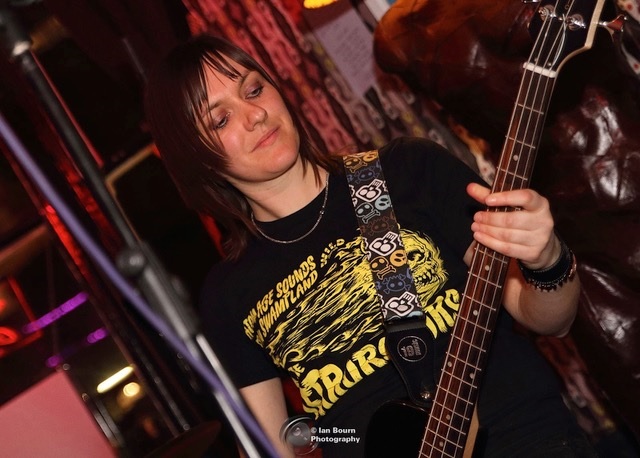 It was finally time for tonight’s headliners Cockwomble to take to the stage. They opened with ‘All Of The Money! None Of The Style!’. Wow, what a great sound was my initial thought. Victoria is an awesome bass player and the style of the band really enable you to hear how good she really is. Ali makes the lead guitar sing and I loved the sound, alongside punchy, quickly delivered lyrics. 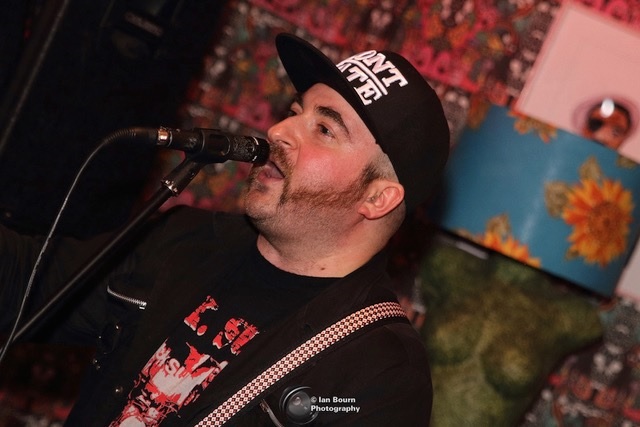 I already want to see them again and I’m only one song in. Next up ‘Conspiracy’ from the new EP of the same name released today. Another great song and I’m losing myself in the performance. The whole crowd were really enjoying this. Next is ‘Goebbels And Orwells’, which kicks off with a great bass riff that continues right through the song. Loving this even though I haven’t heard it before. Next is ‘Want Stuff Buy More Stuff’, which is much faster and very different from their first three songs and it has a great guitar solo.

Each song has a meaning and the next is about not being played on ‘Radio 1’, then ‘Henry 55th’ is about the royal family. Sadly there are only two more songs left. The first being ‘Henchman’ and then a new song called ‘Threads’, which not on any of the EP’s. 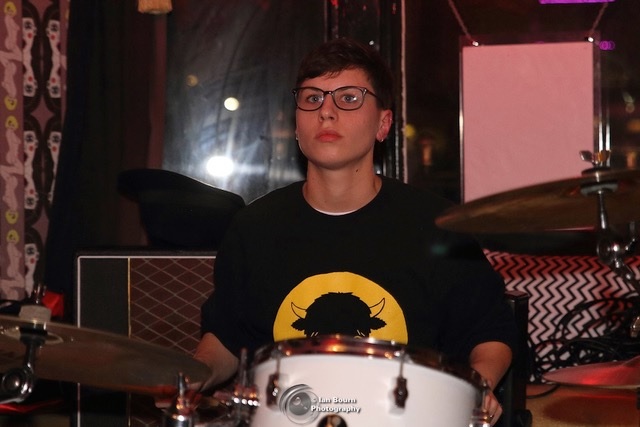 I really enjoyed the whole set and will definitely be heading out to see this band again. I met them after the gig and they are currently finishing the recording of their new album, which they hope to release before they appear at Rebellion 2019 in Blackpool. I purchased the EP’s at the gig and have been listening to them all day. You can catch Cockwomle locally when they will be performing with Subhumans at the Con Club in Lewes on Sunday 2nd June – purchase your tickets HERE.

More on Cockwomble HERE and listen to them HERE. 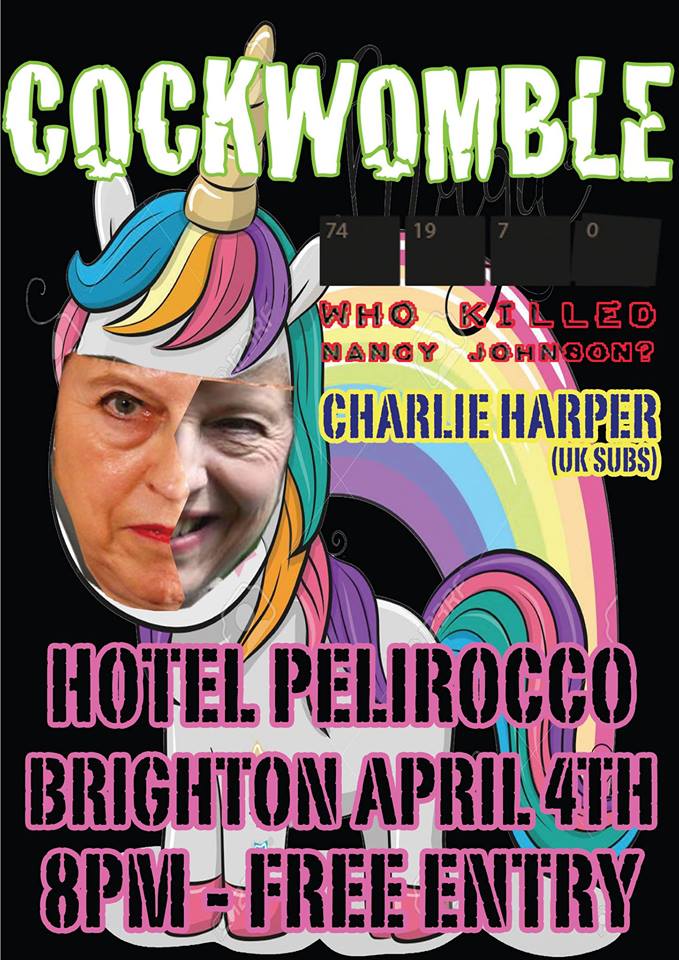