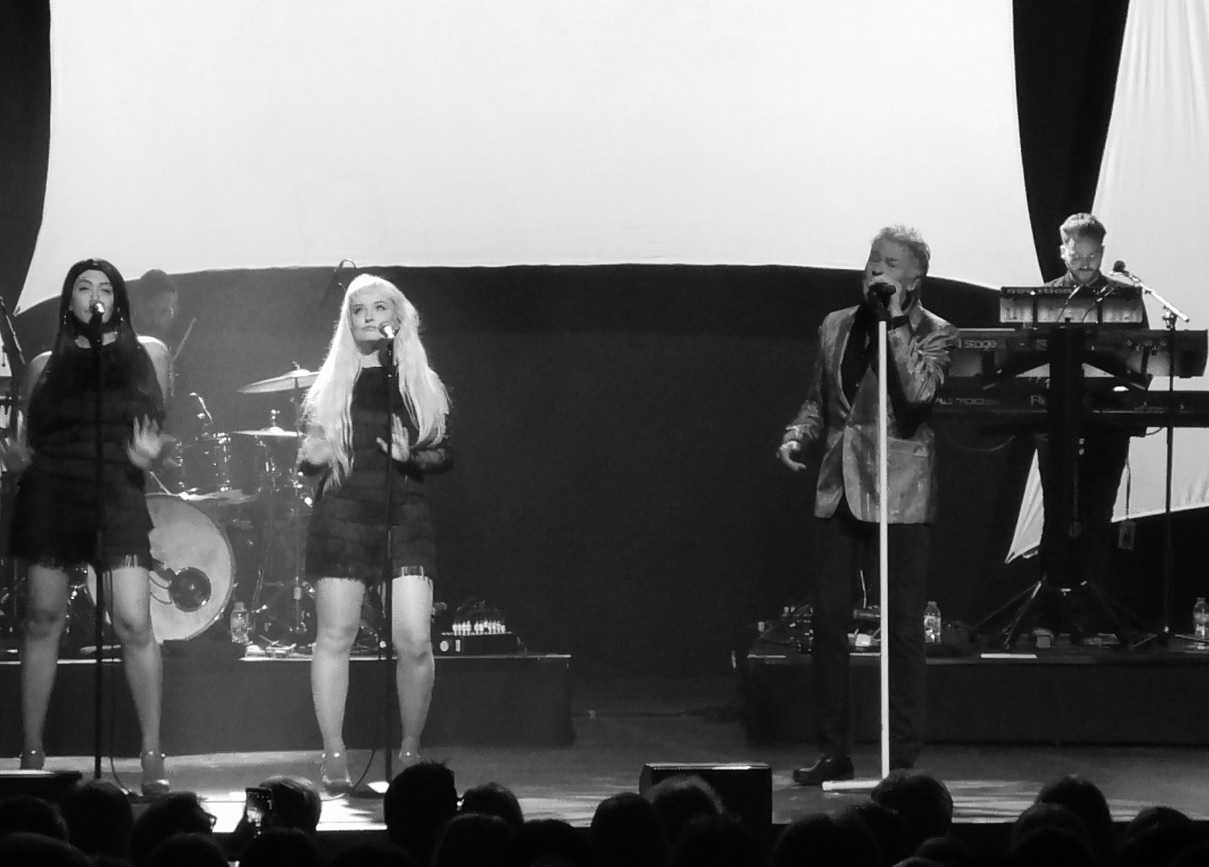 I’m pretty sure that the Theatre Royal in Brighton were well chuffed when they managed to secure an evening with everyone’s favourite 80’s crooner Paul Young as part of his latest 28-date UK tour.

Tonight was obviously going to be an intimate affair, as I would have thought at Paul would have been able to sell out the nearby Brighton Dome concert hall without any trouble, especially as he opened his tour two days ago at the larger capacity De La Warr Pavilion in Bexhill-on-Sea! 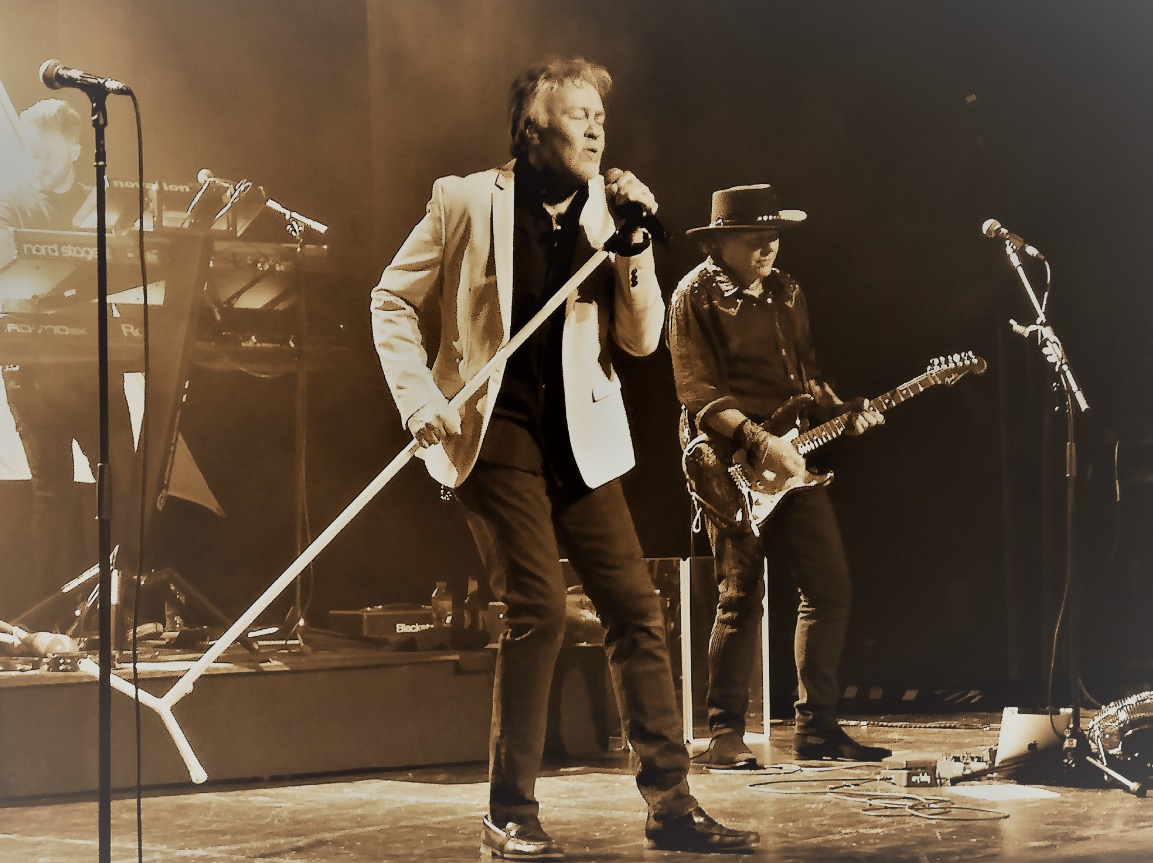 Paul Young was appearing in New Road, Brighton in order to rekindle the public’s love of his 35 year old debut album ‘No Parlez’. This 1983 No.1 album spent a total of five weeks at the top and totally launched Paul into the limelight by selling in excess of 900,000 copies here in the UK and thus making the album a triple platinum seller.

The previous five years had seen Paul gaining some inroads on the success front, with his first chart forray being as the lead vocalist of the Streetband, who had the memorable Top 20 UK hit single ‘Toast’. Yes indeed that is the same man – check out the video HERE. 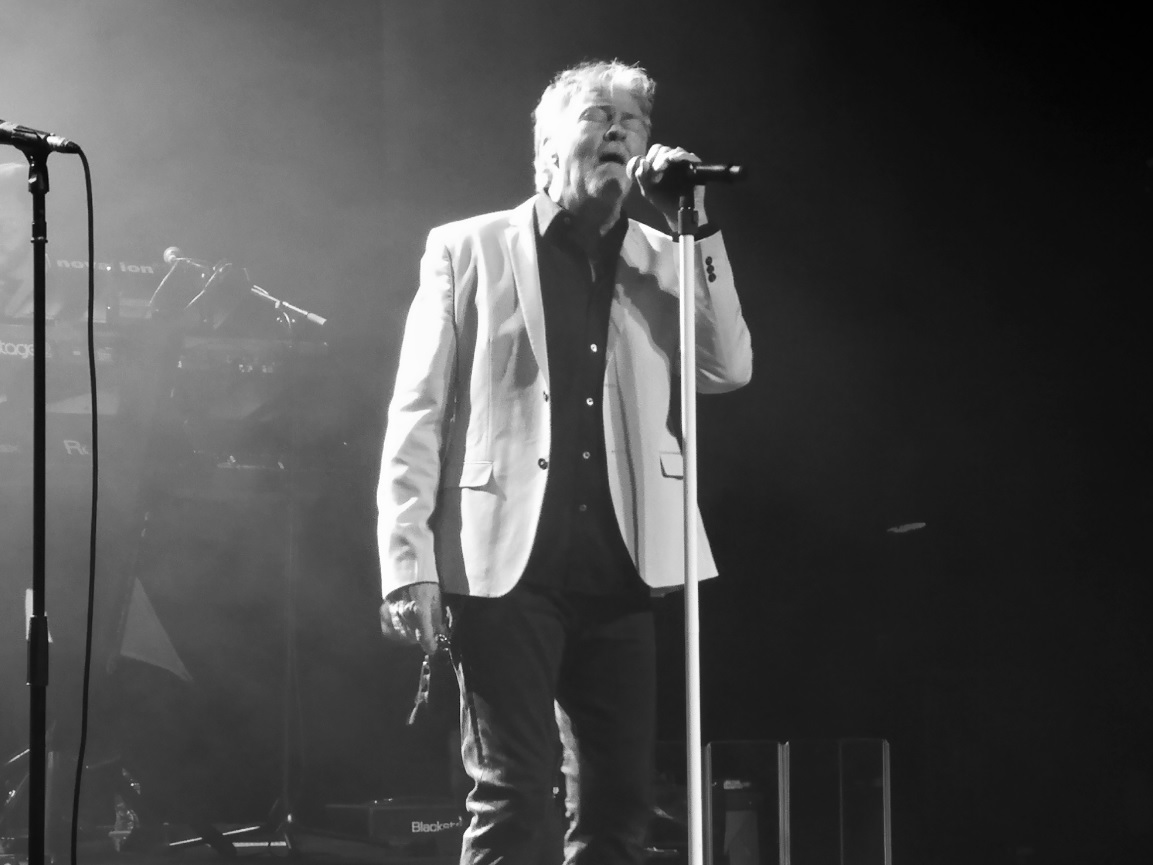 From the ashes of the Streetband, rose The Q-Tips, who had their first rehearsals and gigs in November 1979 and during their time released a couple of albums and disbanded in early 1982 when Paul signed a solo recording contract with Sony/CBS and the rest as they say is history. 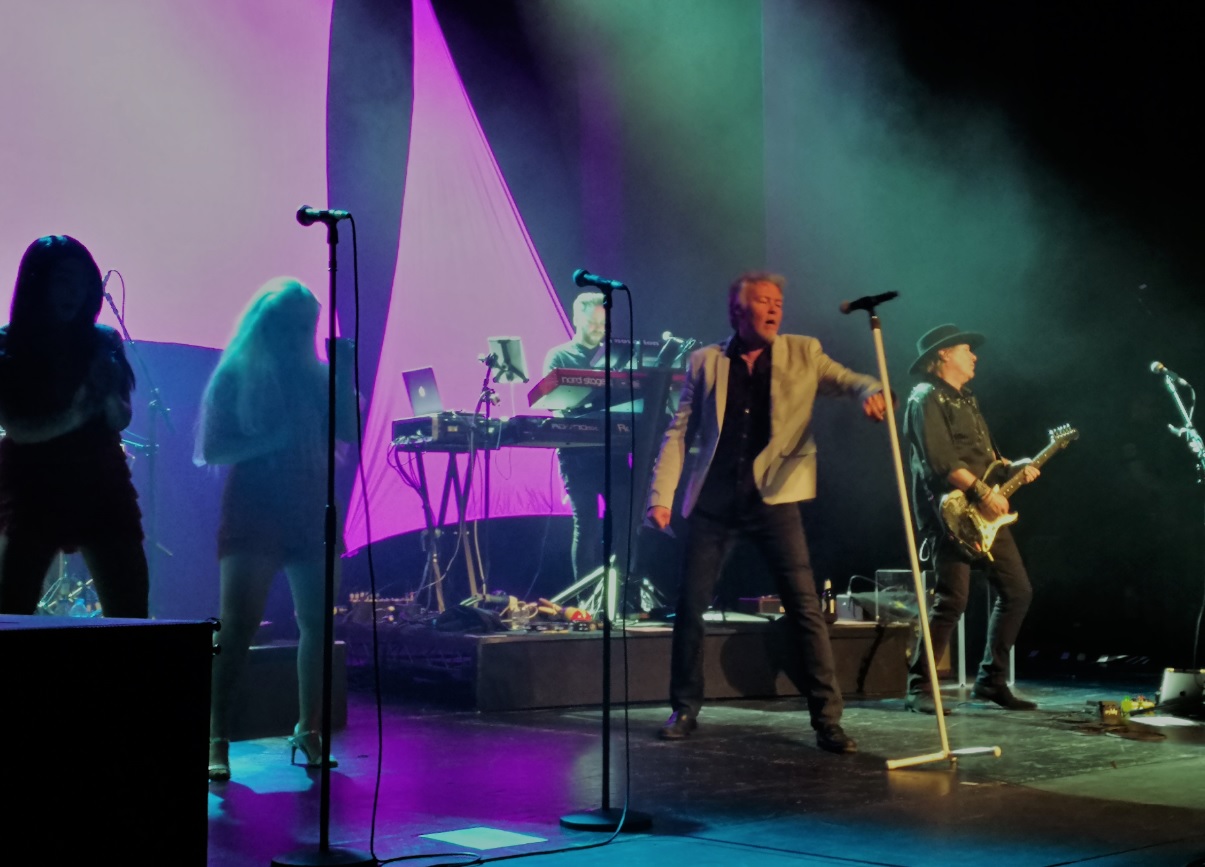 Paul’s now 63 years old and is a keen chef, biker and fan of all things Mexicana! Therefore it’s no wonder that he has a little sideline that’s been going on since 1992 in the form of Tex Mex/Americana band ‘Los Pacaminos’. In fact Paul has brought along fellow band member guitarist Jamie Moses (who’s sporting the Van Morrison look) on this current tour. It’s fair to say that Jamie was second to Paul in the limelight tonight, but that’s hardly surprising as he has been second guitarist for Brian May and Queen since 1992. Also on the stage was a drummer, bass player, two lady vocalists and a keyboardist playing his first gig with the band. 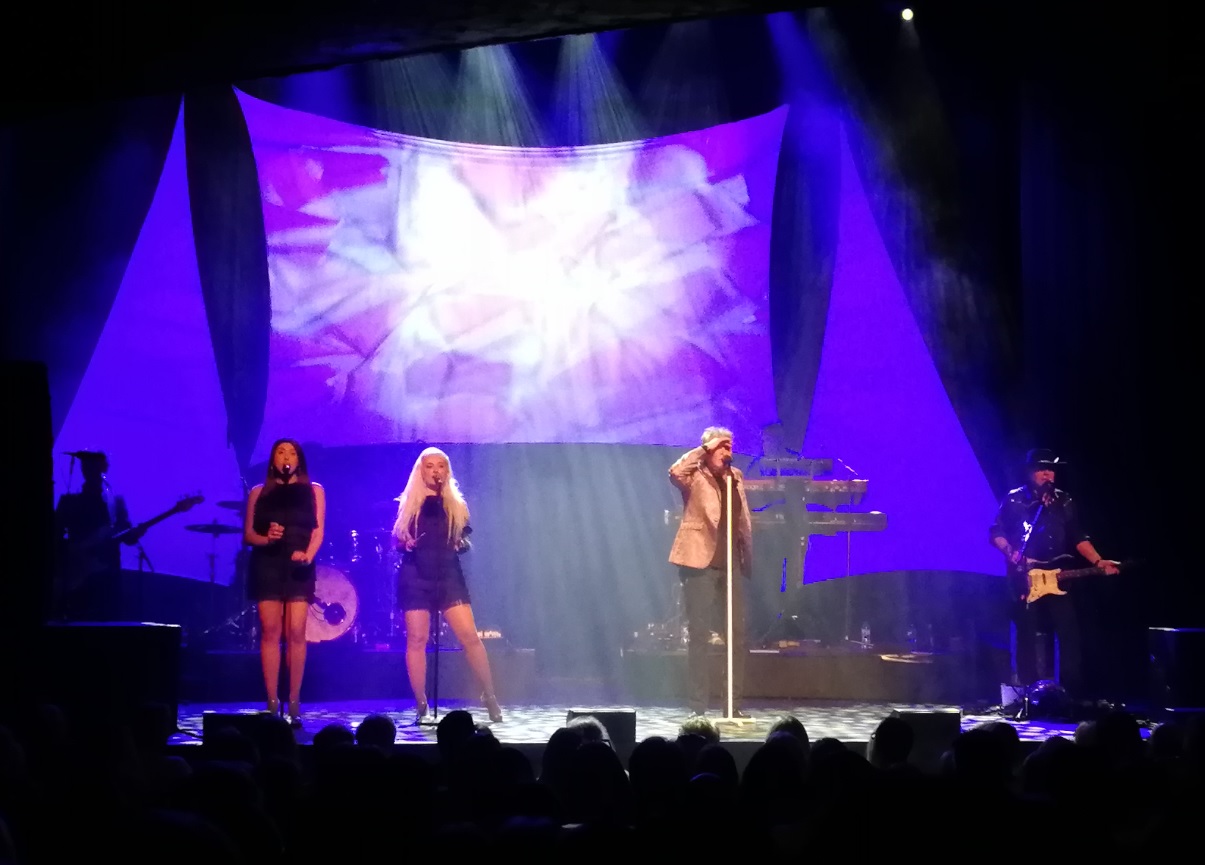 This evening the sold out mainly mature crowd were treated to seventeen tracks in total which included all of the ‘No Parlez’ album as well as a selection of mainly covers. I was anticipating a rather more sedate affair than I’m used to and my friend that accompanied me was grateful for this as he had hot-footed it from Amsterdam to be here tonight.

The sound quality this evening was very crisp indeed, especially for the support artist Jon Allen (more on him later), but it could have been just a little shade higher for my liking. The lighting was not extravagant but certainly did the job and the two guys at the back of the theatre who were responsible for sound and vision, were certainly earning their keep. 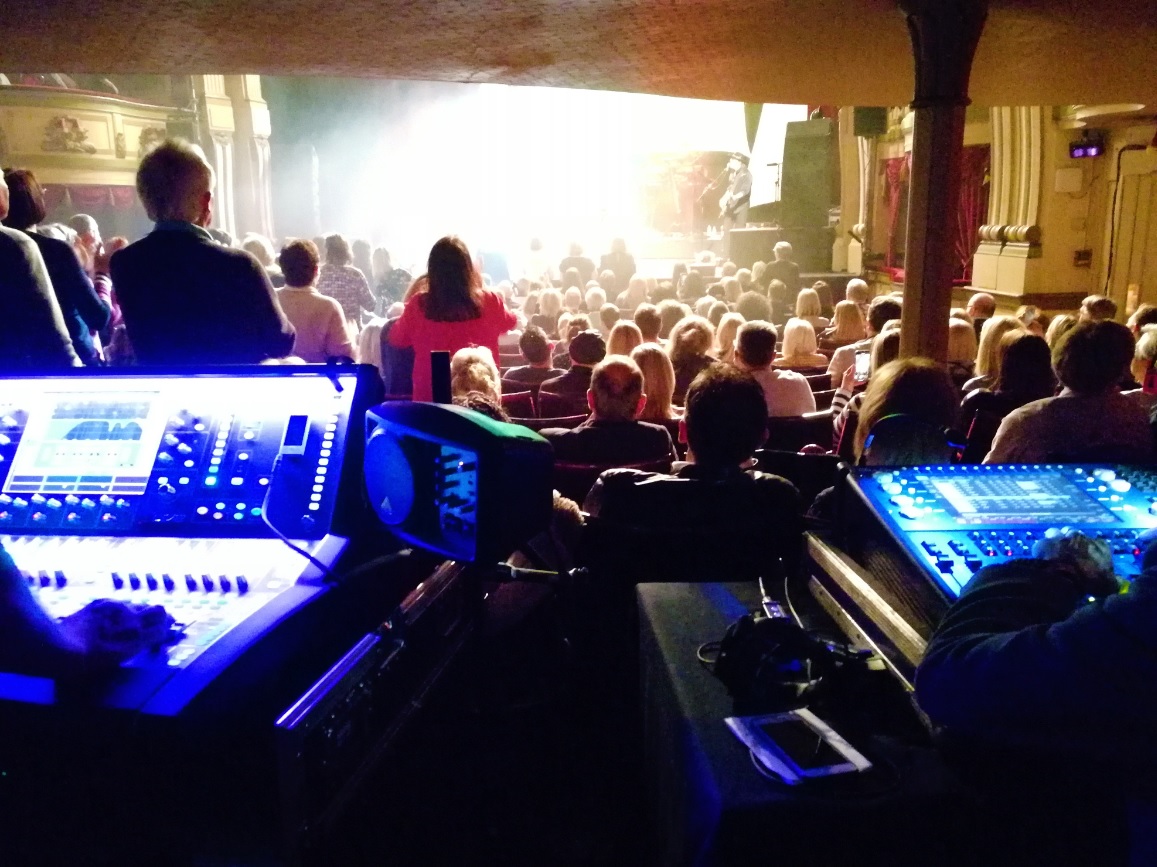 I have to be honest in saying that I have not seen Paul Young perform live before or have ever been aware of having listened to the ‘No Parlez’ album in its entirety, however any artist that was involved in the all-star charity project Band Aid single ‘Do They Know It’s Christmas?’, is fine by me! You may recall that he sings the opening lines on the tune and also appeared at the spectacular Live Aid concert. 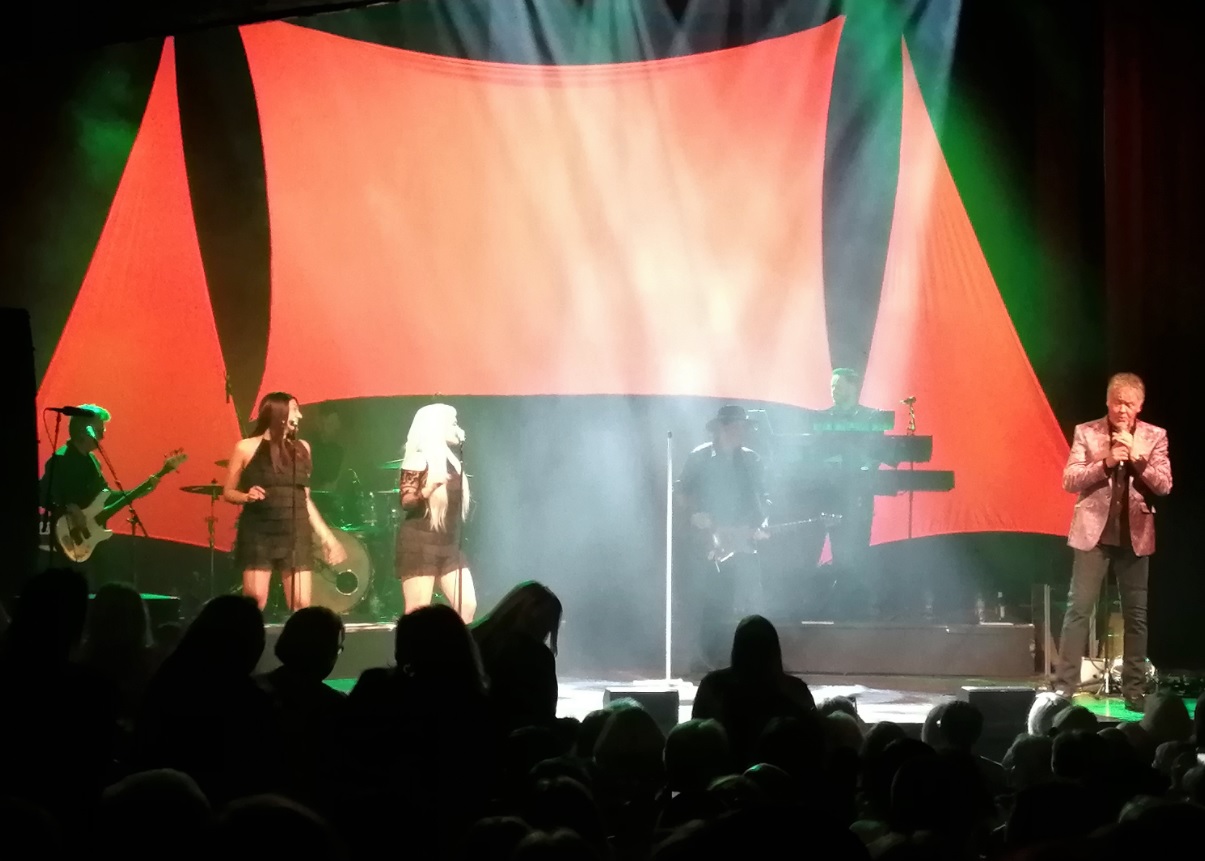 Funnily enough, prior to the performance I had actually seen Paul out and about in Brighton sporting a cool leather jacket, but come the time to hit the stage, that had been traded in for a more sparkly gold jacket affair, which itself got replaced after track eleven, with a light grey jacket. I also noted that during the performance the brunette and blond backing singers had a change of wardrobe as well.

It’s far to say that for fifteen of the seventeen tunes, the conservative (with a small ‘C’) audience remained rooted to their comfy seats, but on a couple of occasions, they were all up on their feet. Those being for ‘Come Back And Stay’ and the final ‘last dance number’ ‘Everytime You Go Away’. 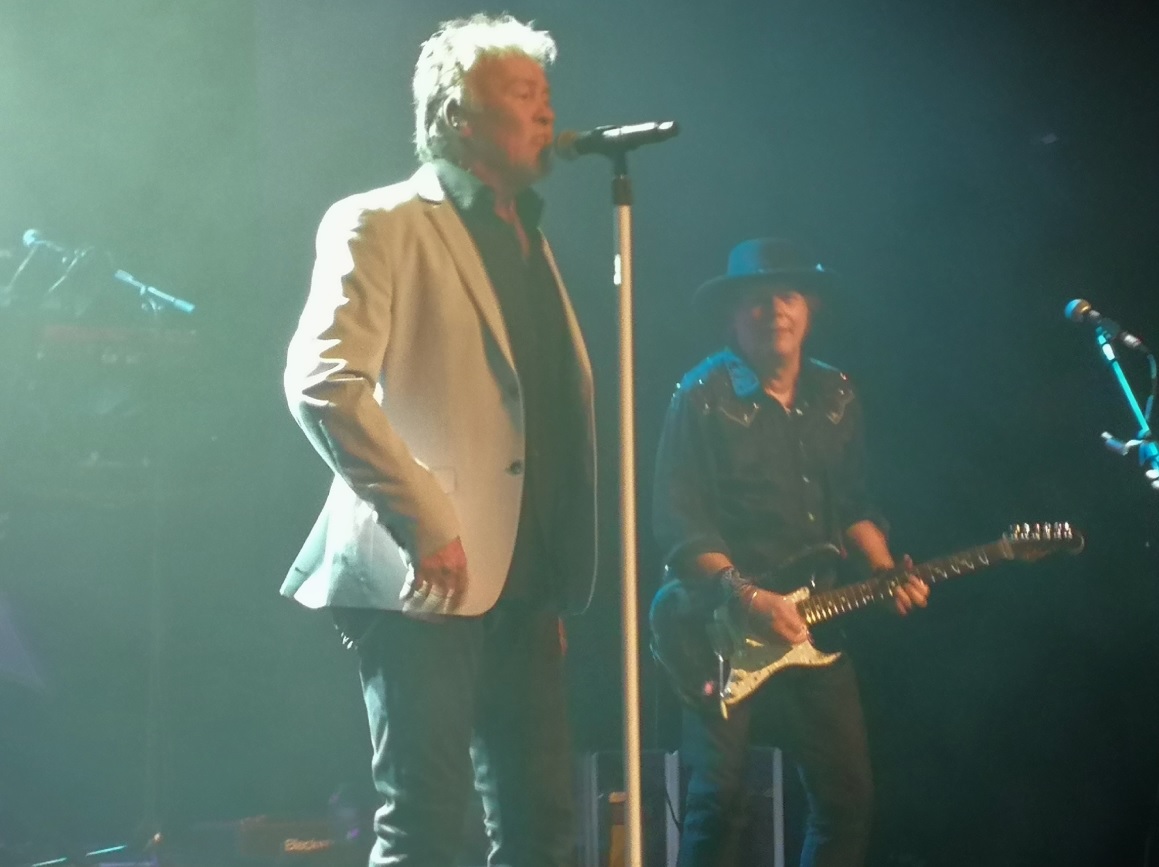 Paul came across very well this evening and it seems that during his mid-twenties, when the debut album came out, he had mainly one thing on his mind according to himself…..sex! The platter is littered with the subject – sure fire hit then! The ‘No Parlez’ album produced Paul’s first UK No.1 single – The Marvin Gaye cover of ‘Wherever I Lay My Hat (That’s My Home)’ and hits ‘Come Back And Stay’ and ‘Love of The Common People’ and obviously they all had an airing tonight. 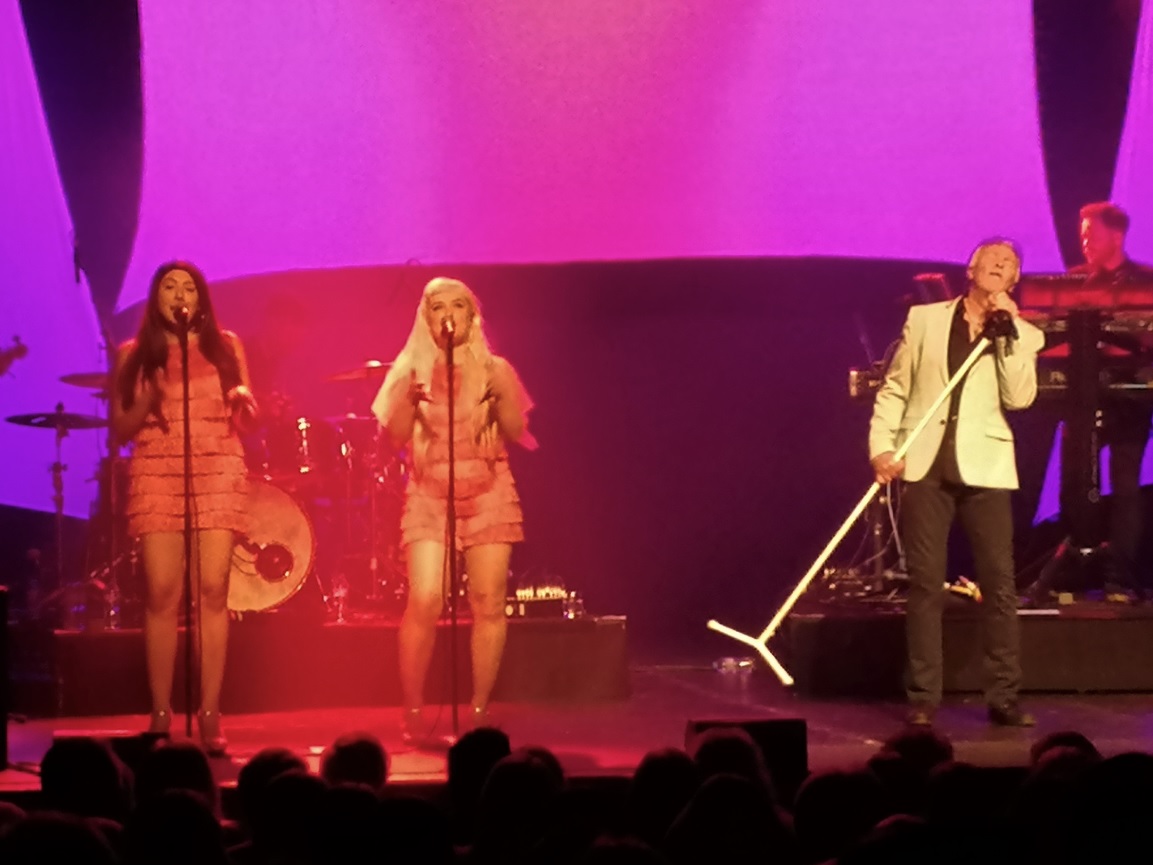 I’m certain that my choice cuts from the night will not necessarily match the same selections made by the diehard fans present, for the fact that they were mainly albums tracks. I enjoyed title track ‘No Parlez’ as there’s a Talking Heads vibe going on; ‘Ku Ku Kurama’ which reminded me of a mixture of the hit singles by Space ‘Female Of The Species’ and The Stranglers ‘Strange Little Girl’, infused with an overall David Bowie vibe; ‘Oh Women’ was enjoyable because of the decent keyboards and the girls backing vocals; but the pick of the bunch was his cover of Joy Division’s ‘Love Will Tear Us Apart’.
Paul said that there was controversy about the track at the time (meddling with the Holy Grail etc) and it was not released as a single here in the UK, but I might well still have my 12” white label copy of it somewhere around the house! As far as I can recall, there was absolutely no writing on the disc or white cover whatsoever, and I took a punt buying it – worked out just fine! 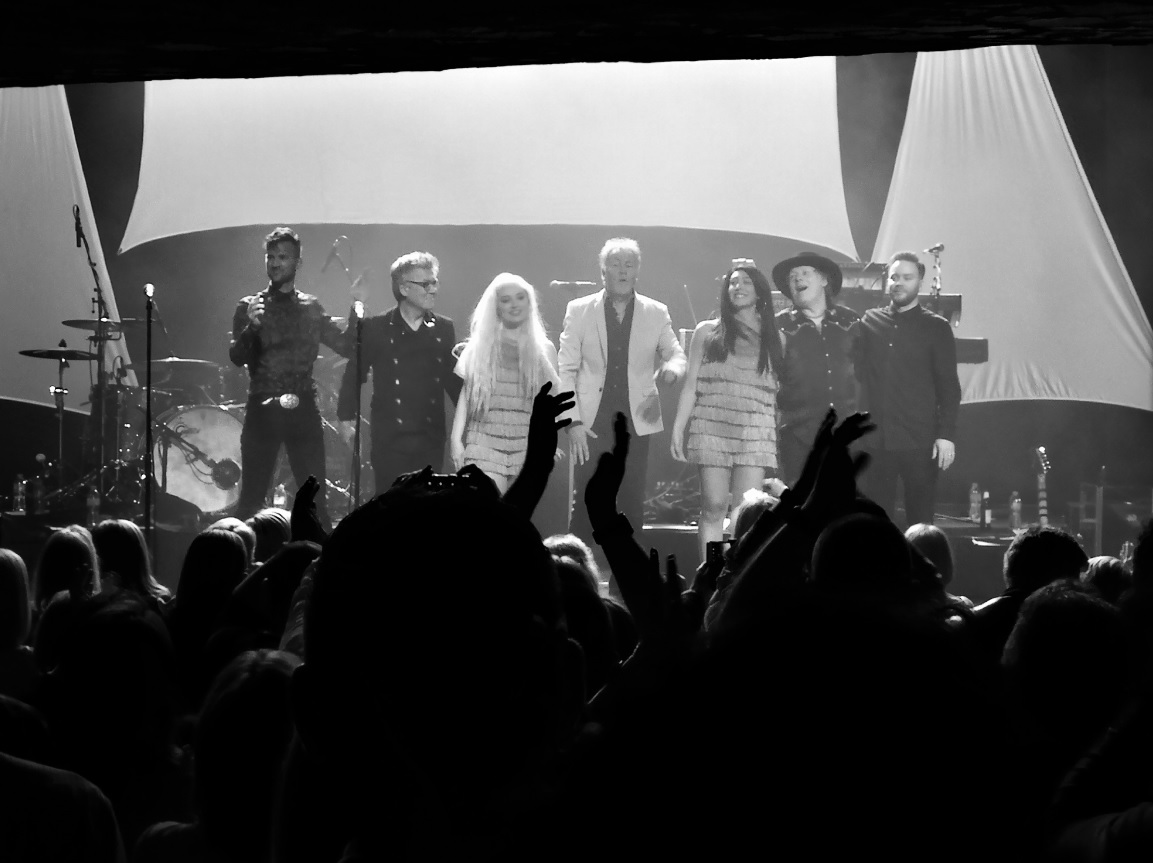 Paul Young and team at the end of their performance at the Theatre Royal, Brighton 28.04.19 (pic Nick Linazasoro)

Paul Young data can be found by visiting his website HERE. 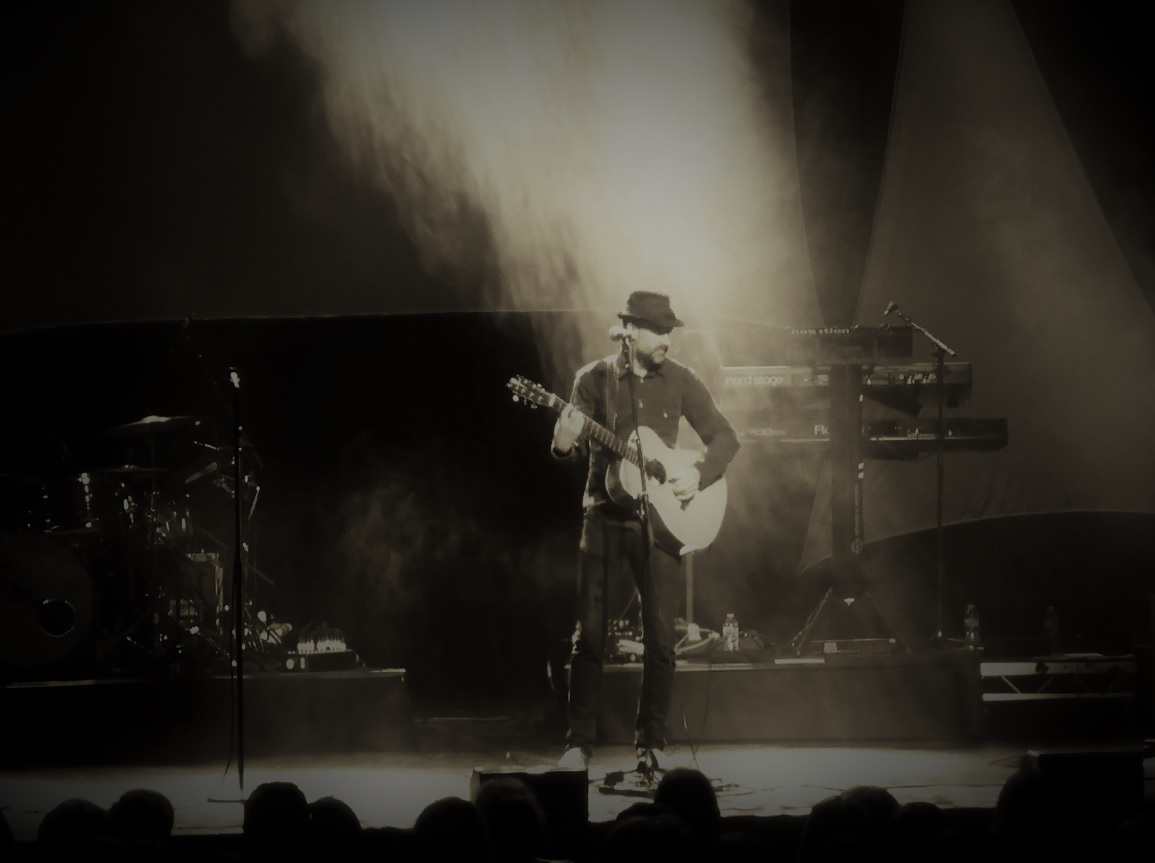 Support tonight came from left-handed Jon Allen who delivered around a half a dozen acoustic numbers on his guitar and I tell you what, you could have heard a pin drop during his set. Everyone was giving him the respect he was due, by focusing on his performance. I’m sure Jon came off of the stage feeling pretty chuffed. 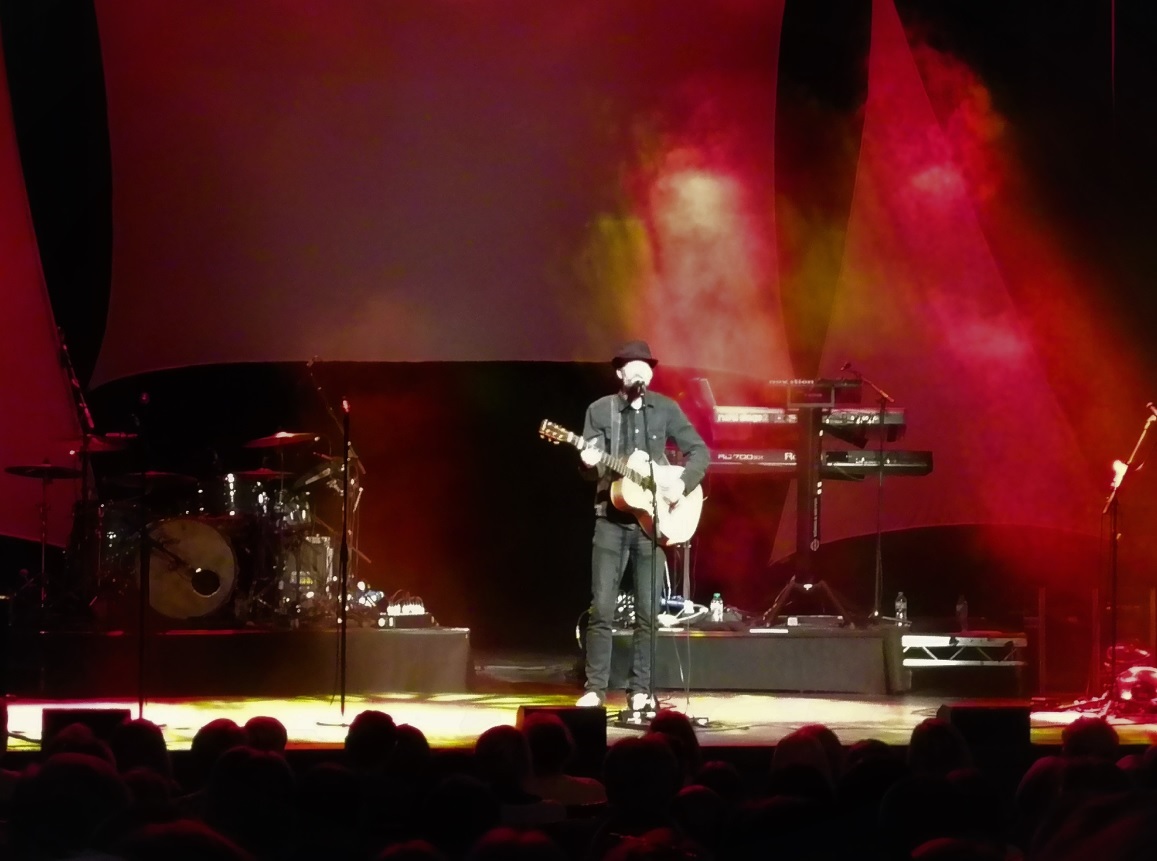 As I stated earlier on, the sound quality during Jon’s performance was perfect. If you enjoy music akin to Ralph McTell, he of ‘The Streets Of London’, then Jon’s yer man! Tonight, Jon gave a nice touch as he requested that the audience give their appreciation for tonight’s wonderful Grade II listed venue, which has been entertaining theatre goers for more than 200 years. 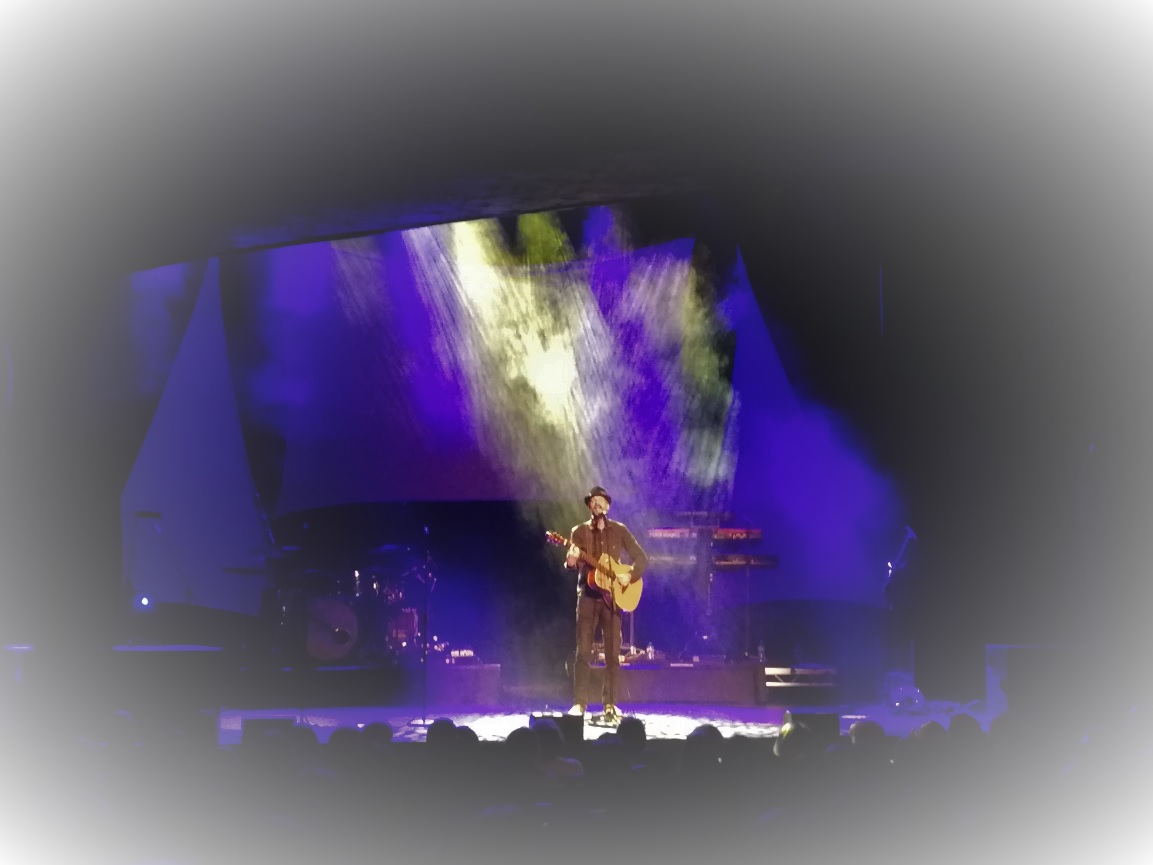 Paul Young has posted on social media “Part 2 of my UK tour ’35 Years Of No Parlez’ is well underway now and thank you to all of you who came to the first two nights! (Brighton & Bexhill). As well as my amazing band and crew – I would like to thank my support Jon Allen who is with us for one more night and Sinead Burgess who is joining us for the rest of the tour. Two incredibly talented musicians – don’t miss them!” 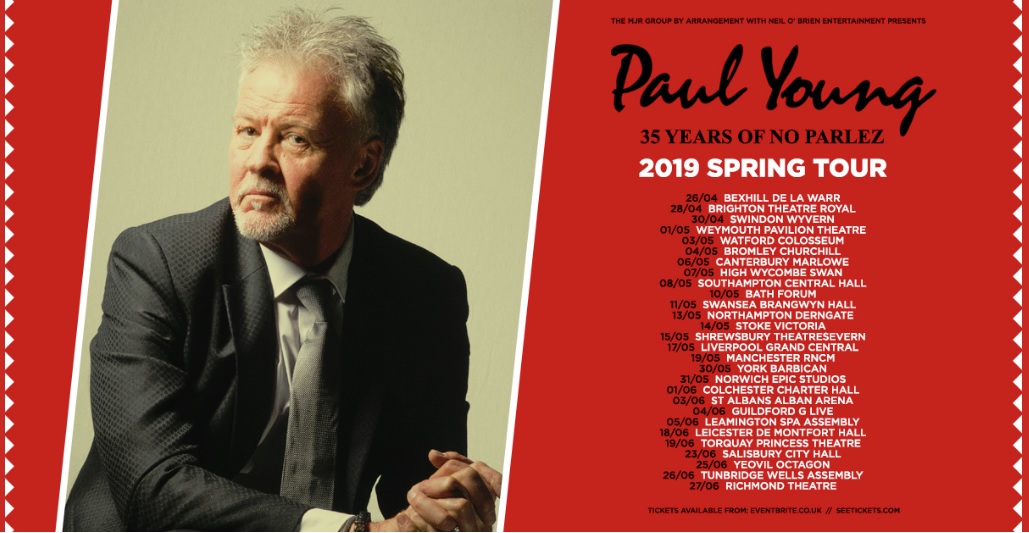 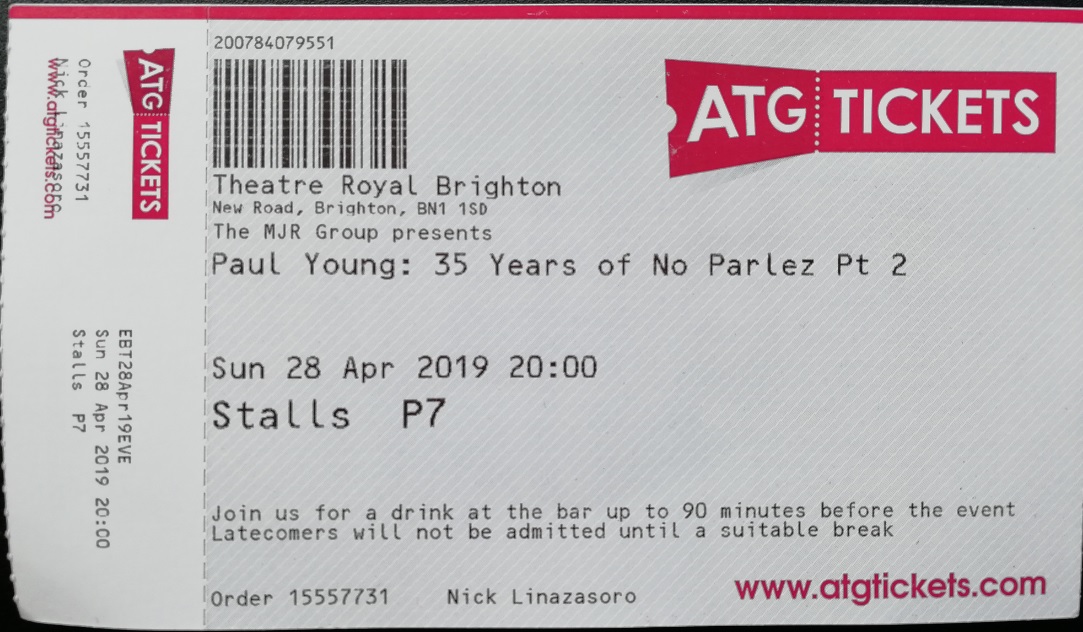