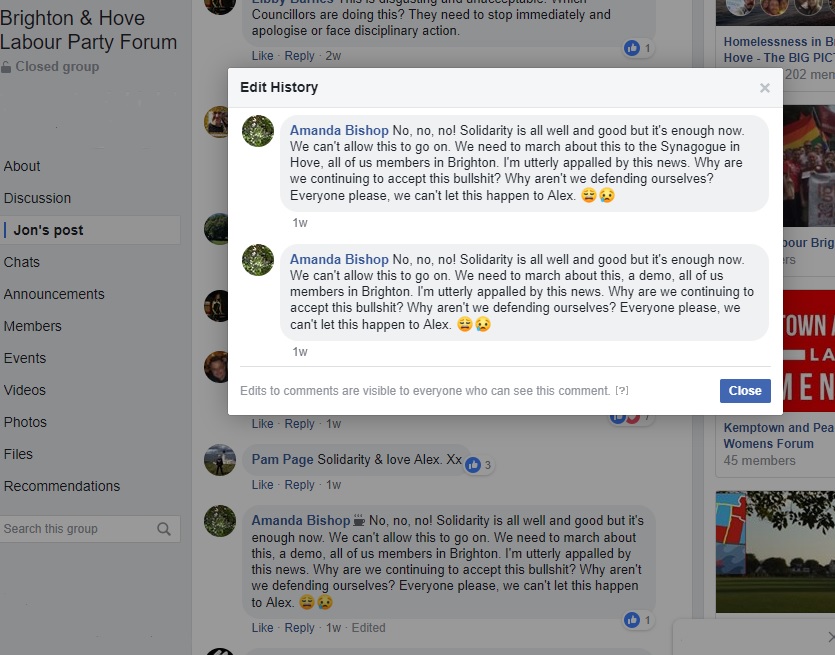 Sussex Police says it will take no action against a Brighton Labour party member who called for a march on Hove synagogue in response to a candidate’s suspension over alleged anti-Semitism.

Amanda Bishop’s comments have been condemned by both the city’s MPs as well as other party members, all of whom are busy campaigning ahead of Thursday’s local elections.

Ms Bishop was responding to the suspension of Labour candidate Alex Braithwaite, who is standing in Wish ward, over comments including Rothschild and Israeli conspiracy theories.

She posted: “Solidarity is all well and good but it’s enough now. We can’t allow this to go on. We need to march about this to the synagogue in Hove, all of us members in Brighton.”

One local member says she reported the comments to the Labour party last week, prompting the city’s synagogues to boost security over Passover.

But it was only after screenshots were published on the Red Roar and Guido Fawkes websites and the Jewish Chronicle yesterday that Ms Bishop was suspended.

A report was also made to Sussex Police, but today the force said it would not be investigating the comments any further and had instead referred them to the local Labour party.

A Sussex Police spokeswoman said: “A matter has been reported to police regarding a suggested march to a Hove synagogue.

“This has been considered and does not constitute a criminal offence; we will not be investigating further. The matter has been referred to the local Labour Party.”

Speaking on behalf of the Sussex Jewish Representative Council, Fiona Sharpe said: “It is totally unacceptable for anyone to suggest marching on a synagogue as a form of protest.

“Change the word synagogue to mosque and watch Ms Bishop and her supporters take to social media in righteous indignation. Why is ok to demonstrate such naked aggression towards the Jewish Community?

“We are a small ageing community, who feel very vulnerable given yet another case of antisemitism in our city.

“Coming only a few days after yet another murder in a place of worship – this time a synagogue again – the Jewish community is very concerned.

“While the police are taking no action, they acted swiftly to assess the situation and to reassure us that there was no credible threat.

“I would suggest that people remember that the words they use have an impact and ramifications.

“Suggesting that you march on a synagogue or any place of worship is an incitement to religious hatred and makes you a bigot.”

Several local Labour members – including a handful of candidates – have expressed solidarity and support for Ms Braithwaite. But Ms Bishop’s comments have been overwhelmingly condemned.

This afternoon, Hove MP Peter Kyle said: “I often wander to one of Hove’s four synagogues – to listen, learn and engage with our remarkable Jewish community.

“The idea of ‘marching’ to one to intimidate and blame a congregation for an attempt to actually *tackle* racism, in an instance *unrelated* to the worshippers, is pure incitement to hate and just plain stupid.

“Once again I’m apologising for something that’s happened within my party and have tried so hard to tackle. I only hope those who are pained by this, made to feel vulnerable by this, can forgive us once more and support those trying to deliver the change we all need to happen.”

Brighton Kemptown MP Lloyd Russell-Moyle said yesterday: “This is anti-Semitism and not acceptable in our society and our party; no excuses.”

Leader of the council, Labour Cllr Dan Yates, told members of the city’s Jewish community on Twitter: “It’s totally appalling. And what’s worse is that it makes communities feel less safe. For no fault at all.

I’m ashamed of this, as the leader of the city council but also as a human being.

“I will continue to oppose this ignorant and unacceptable anti-Semitism in the party I love and the city I love.”