Orla May was a candidate for the Liberal Democrats for the first time in Goldsmid ward at the Brighton and Hove City Council elections last Thursday (2 May). 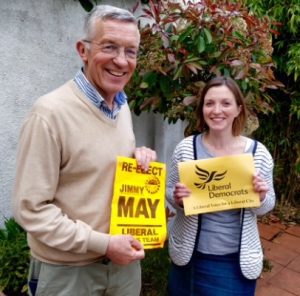 Jim and Orla May

Her campaign came 40 years after her father, Jim May, was first elected as a Liberal to Brighton Borough Council in May 1979.

Ms May was part of the team that delivered a 9 per cent increase in the Lib Dem vote in Goldsmid ward.

She lives in the ward, works locally as a regulator and is a trustee of St Luke’s Advice Service.

She said: “The Lib Dems have had a great set of local election results nationally and we have had a really positive reception on the doorsteps in Hove.

“We are here for the long run and will be holding our elected representatives to account, demanding better for local residents.”

Mr May led the Liberal group, which had 10 councillors, until 1988 when he retired as a councillor.

Since then he has carried out a variety of public roles, including chair of both Shoreham Port and Sussex County Cricket Club.

Mr May is currently chair of governors at Brighton Aldridge Community Academy (BACA).

He said: “I have been politically inactive for many years but I have recently helped Orla and her colleagues for two main reasons.

“Firstly, I am a firm believer in remaining in the EU.

“Secondly, I am proud that Brighton and Hove is a very tolerant and diverse place. It is therefore high time we had a strong Liberal voice for a liberal city.”