Greg Hadfield was first suspended in 2014 for 11 months over claims he had bullied fellow members, including jumping out at Labour’s south east regional director from behind a bin.

He was suspended again in October 2016 for alleged intimidating behaviour, and only reinstated in February this year.

During this time, he remained a member of Momentum, even serving on its steering committee and helping to draw up its slates when candidates for this year’s elections were selected.

Now, Brighton and Hove News understands the Labour party has received several more complaints – including one from Labour Against Anti-Semitism – after Mr Hadfield posted a series of tweets endorsing Ms Braithwaite after her suspension.

Ms Braithwaite was suspended for a series of allegedly anti-Semitic tweets which included conspiracy theories about Israel and the Rothschilds.

Another Labour member, Amanda Bishop, was suspended last week when she responded to Ms Braithwaite’s suspension by calling for a march on Hove synagogue.

Euan Philipps, spokesman for Labour Against Anti-Semitism, said: “Once again, Greg Hadfield seems to be acting in a way that brings the Labour Party into disrepute.

“His apparent support for the suspended Labour candidate Alexandrina Braithwaite during the recent council elections was deeply inappropriate, especially given that she was allegedly promoting antisemitic content online. As campaigning for non-Labour candidates is banned under Labour Party rules we believe he should face a full internal disciplinary process.

“Mr Hadfield was also reported by LAAS to Labour on numerous occasions for alleged bullying of our activists prior to that.

“Taking all that into account and given that he has seemingly only recently been readmitted following a lengthy suspension, we urge the Labour Party to move quickly towards expelling Mr Hadfield from their organisation.” 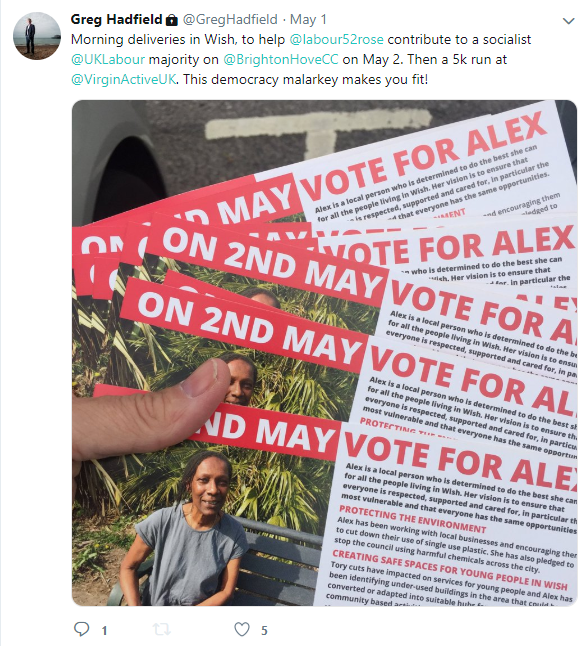 Another local party member, who also reported Mr Hadfield but who asked to remain anonymous, said: “Greg Hadfield was suspended by the party twice for his behaviour.

“Since his suspension was lifted, he has openly campaigned for a member suspended for anti-Semitism. He has bullied local members and continues to bring the party into disrepute.”

Fiona Sharpe, speaking on behalf of the Sussex Jewish Representative Council, said: “It appears that Mr Hadfield, who is not Jewish, is trying to tell the Jewish community what is or is not anti-Semistism. Would Mr Hadfield feel so comfortable lecturing Ms Braithwaite, who is BAME, on what racism is – or asking her to justify it?

“Antisemitism is not a political game for the Brighton & Hove Jewish community. We are a community who has lost immediate family members in the Holocaust, been verbally abused for our beliefs, had our synagogue daubed with graffiti and are repeatedly held accountable for the actions of another sovereign nation.

“We know exactly what anti-Semitism is, how it is concealed behind political ideologies and tropes and how it is manipulated by those seeking to deny its impact and existence.

“Our concerns are very real and we know where they come from. We do not need his understanding and clearly, from his statement, he understands nothing about our community.”

Stephane Savary, National Vice Chair of the Jewish Labour Movement, said: “Ms Braithwaite was suspended from the party after series of comments made on her Twitter account and is now under investigation for anti-Semitism. Therefore she wasn’t the Labour candidate.

“If Labour Party members decided to campaign for her, they should be suspended and be investigated for having supported a candidate that wasn’t backed by the Labour Party.

“Anti-Semitism must be dealt with no matter where it comes from.”

Mr Hadfield declined to say whether he actually delivered any of the leaflets he posted several pictures of in the weeks before last Thursdays election.

In some of these, he also endorsed Adam Imanpour, who was standing for Labour in the same ward, Wish, but in most of his election tweets Ms Braithwaite was the only candidate he mentioned.

He also declined to tell Brighton and Hove News whether he had been contacted by Labour HQ regarding the tweets and the apparent campaigning for a suspended member.

He said: “It is against Labour Party rules – for members and for elected representatives – to discuss internal disciplinary procedures.

“I was proud and privileged to support Labour Party candidates across Brighton and Hove, including in Wish.

“Alex Braithwaite is a black, feminist socialist – and one of the kindest, most gentle comrades I have ever met.

“Civilised people regard charges of anti-Semitism as among the vilest anyone can make against anybody else.

“Such charges should should not be used as casual abuse – for self-serving reasons – by often-anonymous, anti-Corbyn supporters of Peter Kyle, the MP for Hove.

“This cause unnecessary but understandable fear and anxiety among some members of our Jewish community.

“I have complete faith in the robust nature of disciplinary procedure of the Labour Party, under its general secretary Jennie Formby.”

Labour HQ was contacted for comment but had not replied at the time of publication.