A gig ‘Born in the NHS’ brings The Haunt to life 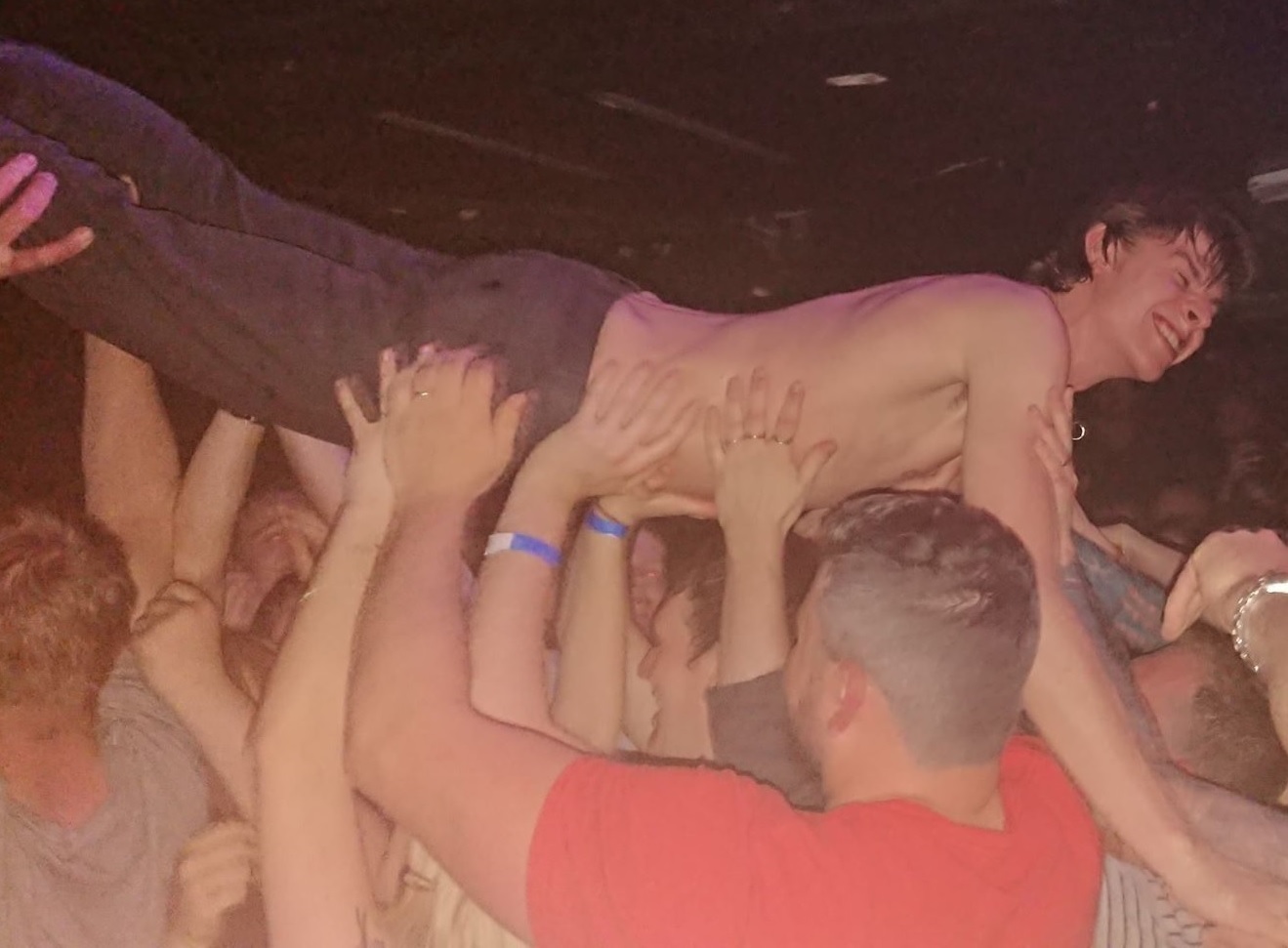 As the Cabbage adage goes, better late than never with a review of their live gig at The Haunt on Friday May 3rd.

The Mossley boys hit Brighton for the first time in just over a year, on a chilly Friday evening for the eighth night of an eleven-date tour. On their last visit to the city I was in attendance at Patterns on April 20th, 2018, where I witnessed Cabbage playing live for my first time. It was one of my most memorable gigs of 2018. A hot sweaty mosh pit, which was top heavy with the younger generation was a thoroughly enjoyable experience for a more experienced mosher. 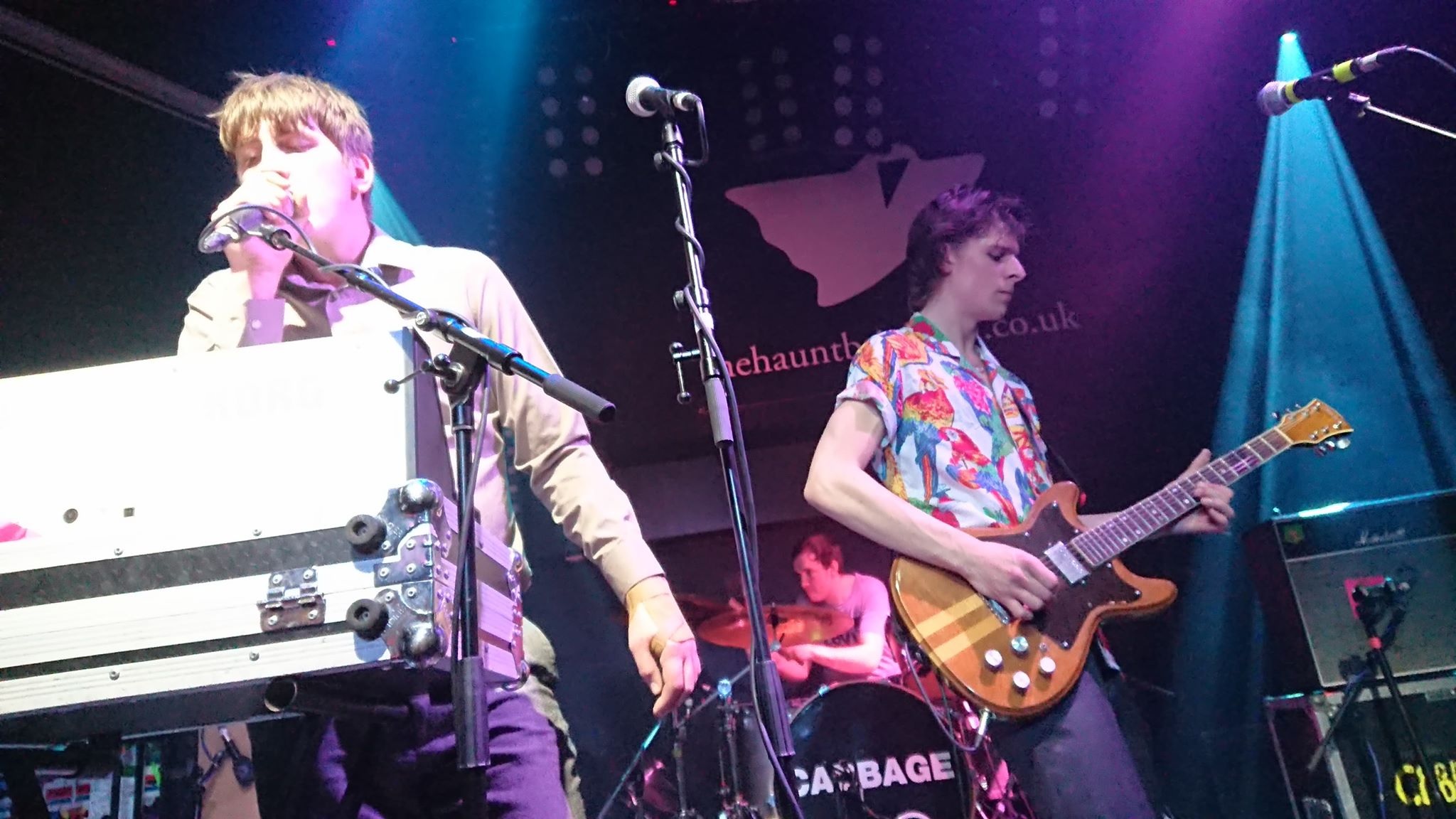 I have just found a YouTube recording of ‘Uber Capitalist Death Trade’ from that night which is a great reminder of what a brilliant night that was and there I was at the front bopping away. Would they still be as exciting a live act one year on? 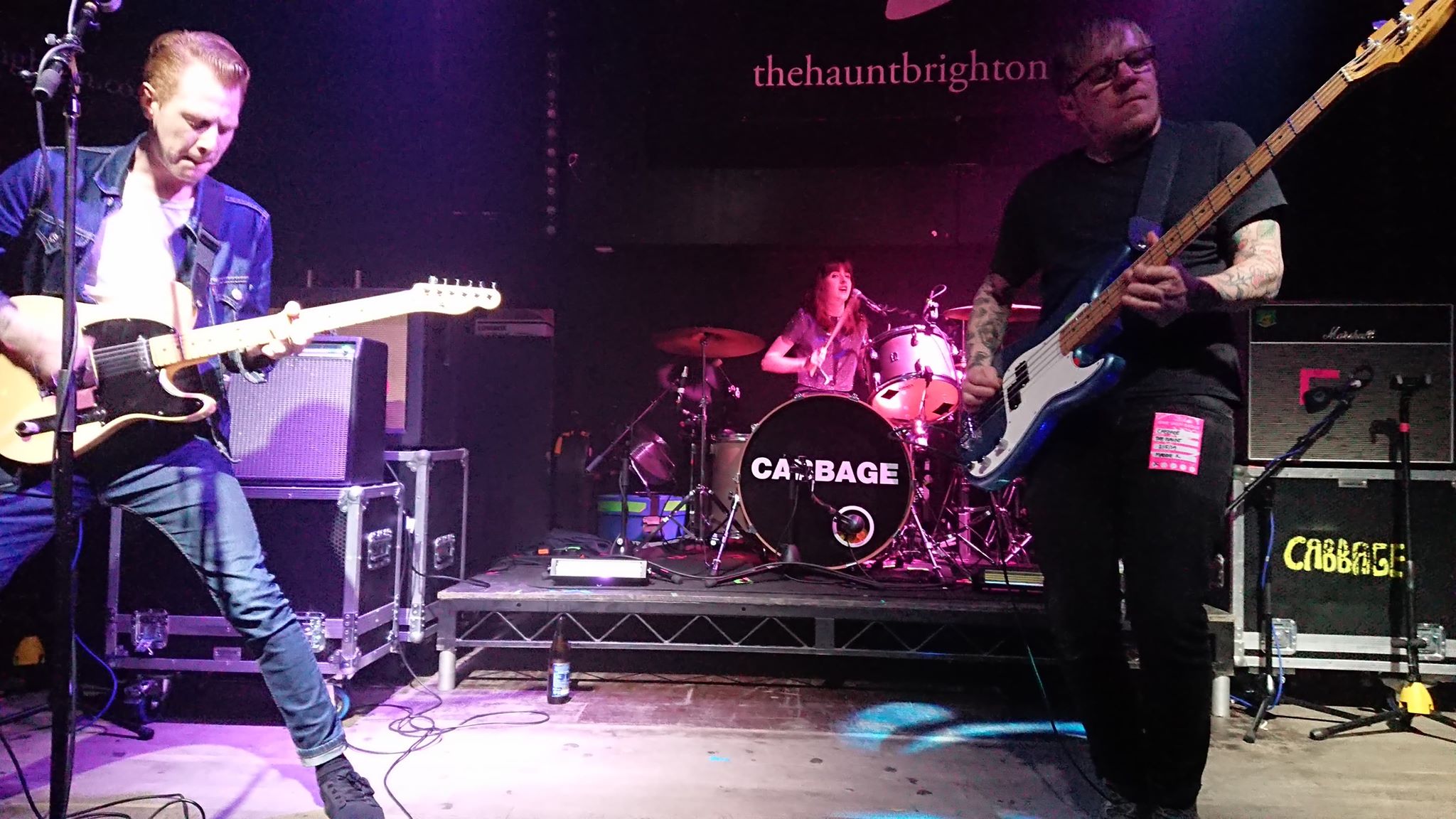 First up tonight was a three-piece band from the Manchester area called The C33’s (pronounced cee three threes), who have only been together since February 2018. They had my foot tapping from the word go with their brand of music which crosses many genres from post punk to rockabilly to garage and beyond. 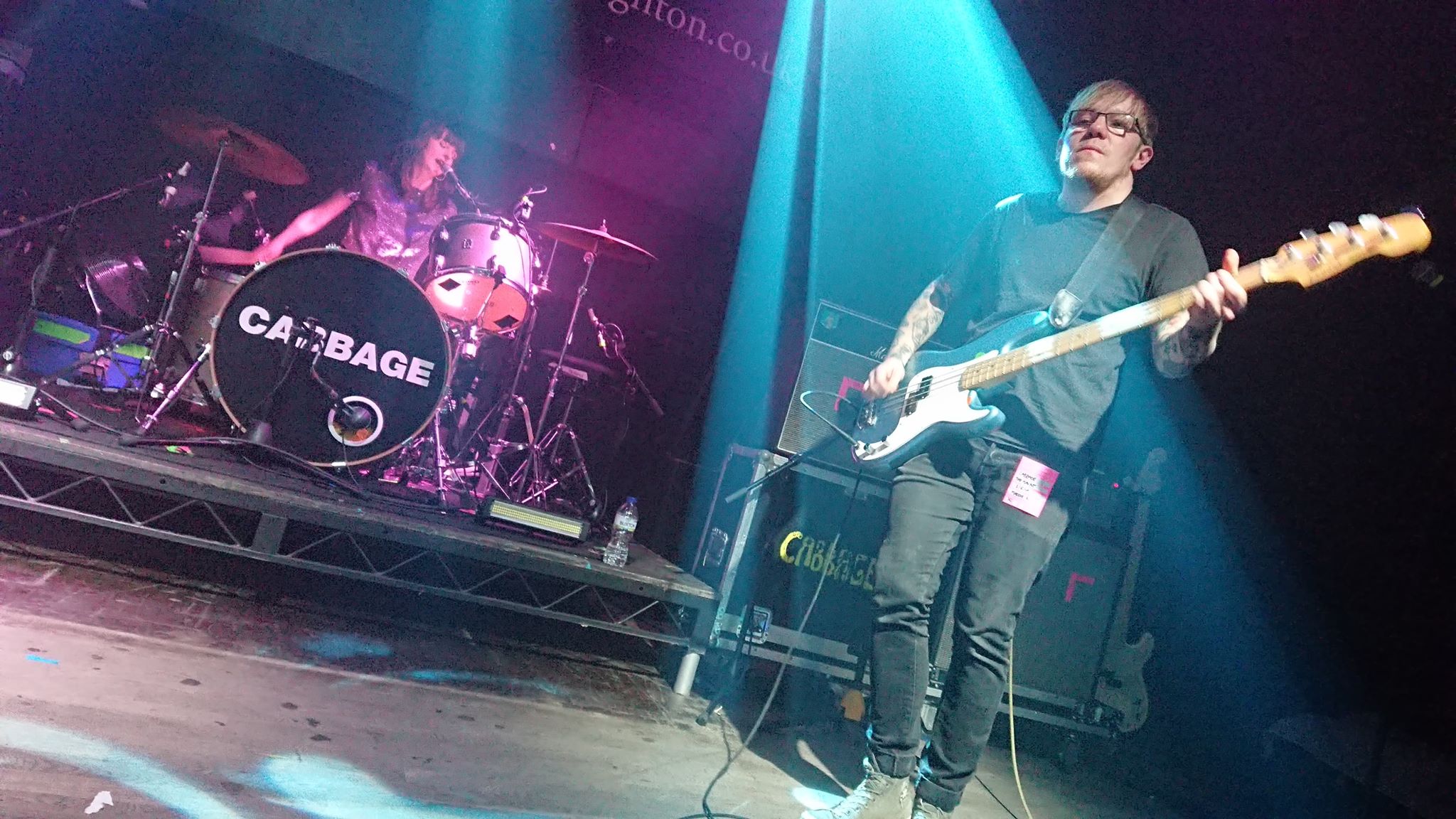 They have just released ‘Manic Depression’ on ‘These Bloody Thieves Records’ and it is blatantly obvious to see why as this song stood out for me in their set. From the fast drums and yelp of Judy, to the surf guitar of Cav, to the thundering basslines of Ste, this tune is well worth three and a half minutes of anyone’s time. The subject matter used to be taboo, but songs like this can only help to bring it to the forefront of regular conversation. Yet another band to show a lot of promise and definitely one to watch out for in the future. 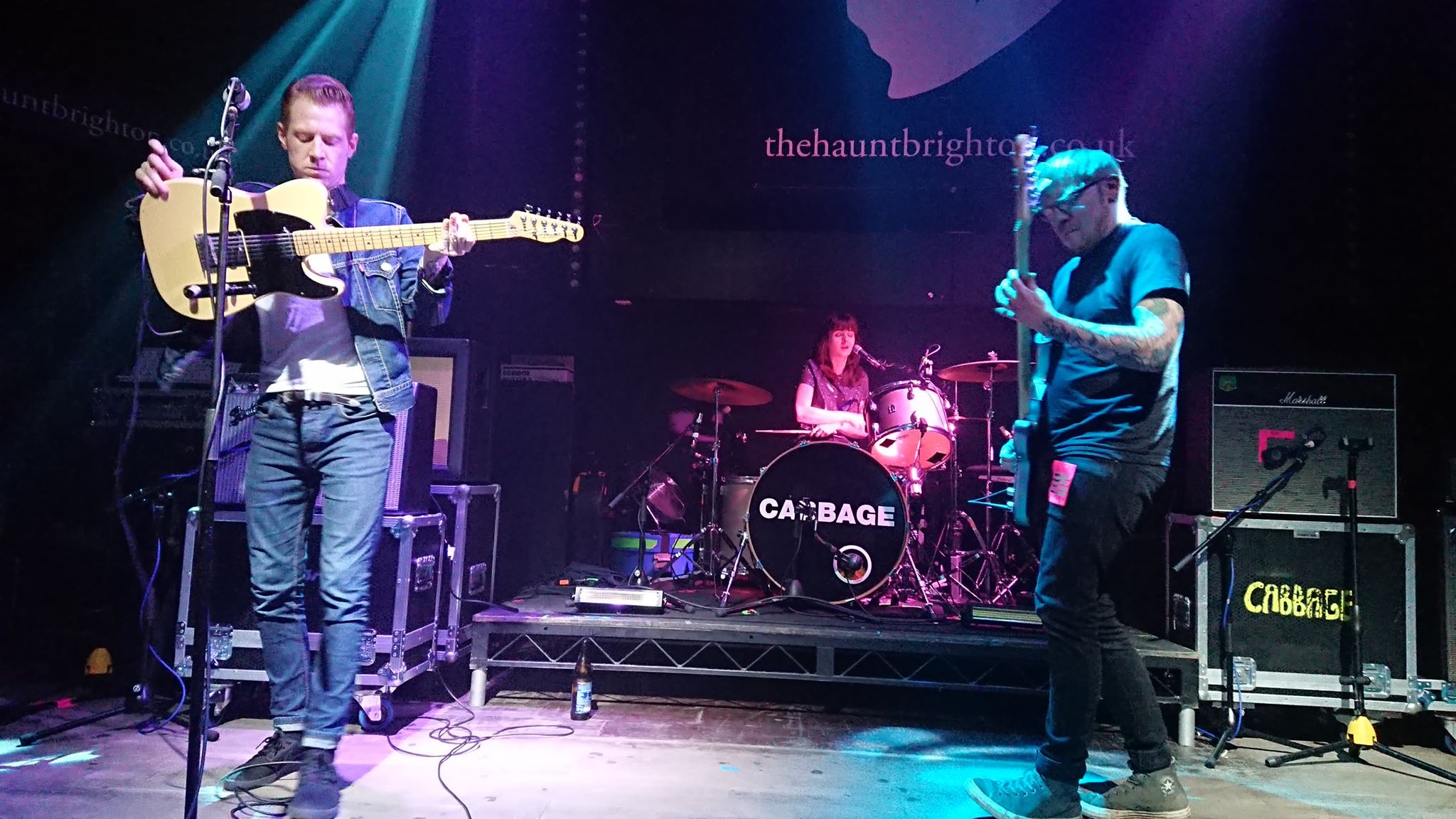 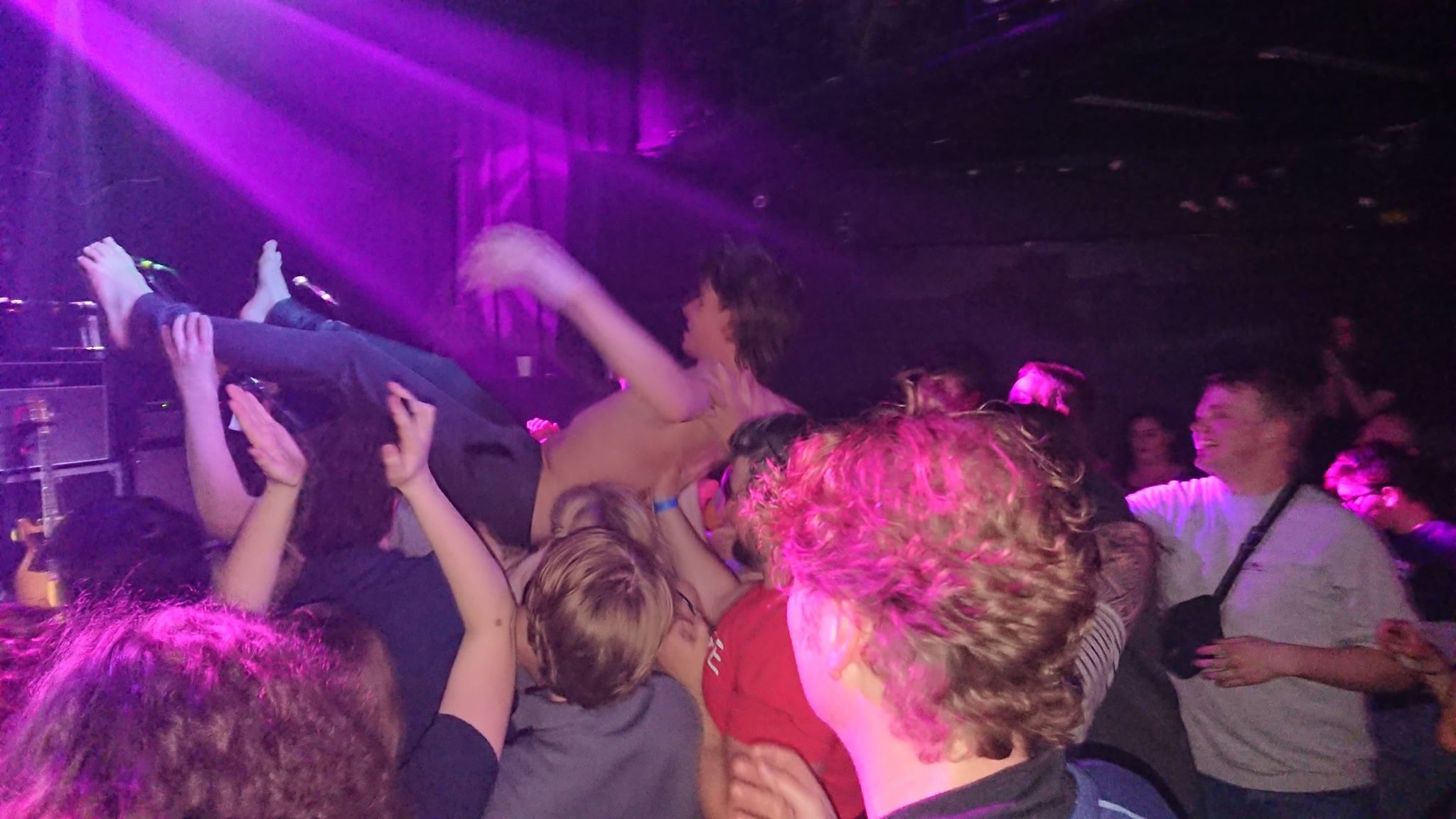 The lights dimmed, and the anticipation was intensifying, only for the beautiful voices of Agnetha Faltskog and Anni-Frid Lyngstad singing ‘Gimme Gimme Gimme (A Man After Midnight)’ to gently reverberate from the speakers. Brilliant! The scene was set. The band (Cabbage) appeared on stage to a rousing reception, Joe in a brightly coloured shirt with parrots emblazoned on it, whilst Lee was dressed in a beige shirt and slacks to obviously match the NHS wrist splint he was wearing on his left hand.

Cabbage were out on tour to promote their new single ‘Torture’ released on their very own Brassicka Records label, wisely chosen as tune of the week by Annie Mac, and they didn’t waste any time as the opening song of the set was said song. Cabbage have described their new single as “A combination of some hijacked philosophical crossroads and the belief in the human voice box. It’s our attempt at The Beach Boys if we ran out of money before getting the orchestra in. Nonetheless, with just a dose of pop and a terribly dour theme, it has come out just how we desired.” It is a catchy tune with hard hitting lyrics and was a good start to the set. 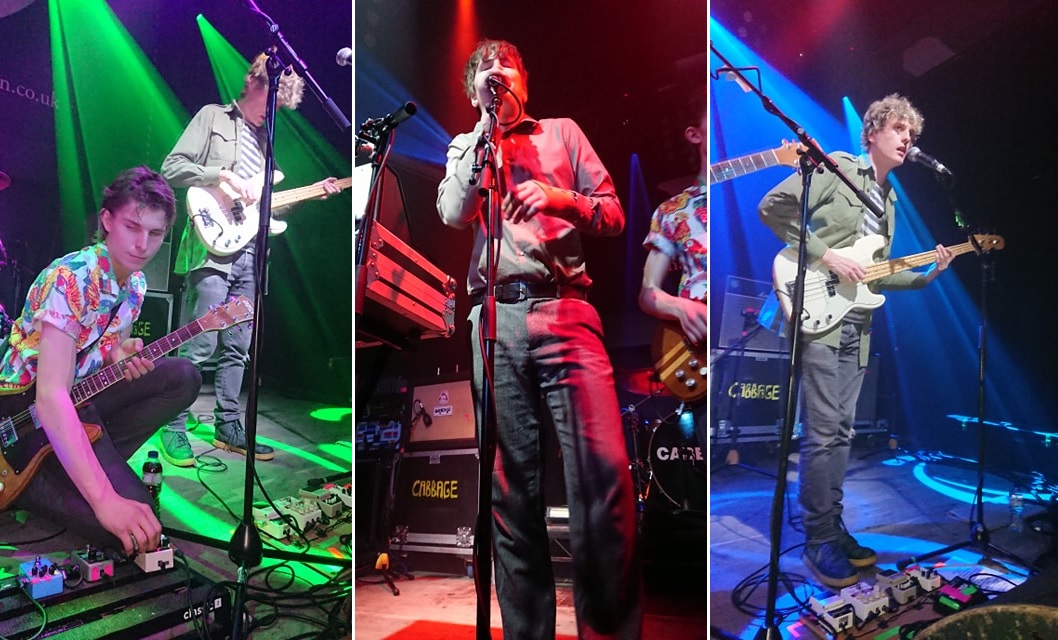 Suddenly it became a great start to the set as they blasted out my favourite track ‘Uber Capitalist Death Trade’ where Lee’s vocals are at their best and the energy throughout the band is taken to the highest level possible. This was quickly followed by ‘Fickle’ the second track from the ‘UCDT’ EP, and we were in full flow, as was the alcohol for the young females in the mosh pit which was seemingly giving them mosh pit superpowers as they took on all-comers. I was the recipient of a free drink from one of them as a shot of Pernod, a drink that I don’t have fond memories of having been violently ill some 37 years ago and never recovering from the trauma, was spilt on me resulting in rather sticky arms and an aniseed stench that I never wanted to smell again in my lifetime. Thankfully the set continued at a frenetic rate to distract me from my private hell.
‘Tell Me Lies About Manchester’ was dedicated to the much-loved Mancunian busker, Ray Boddington, who was tragically killed after being hit by a tram.
Next up Lee informed us was some Brexit pop as the band launched into ‘Terrorist Synthesiser.’ 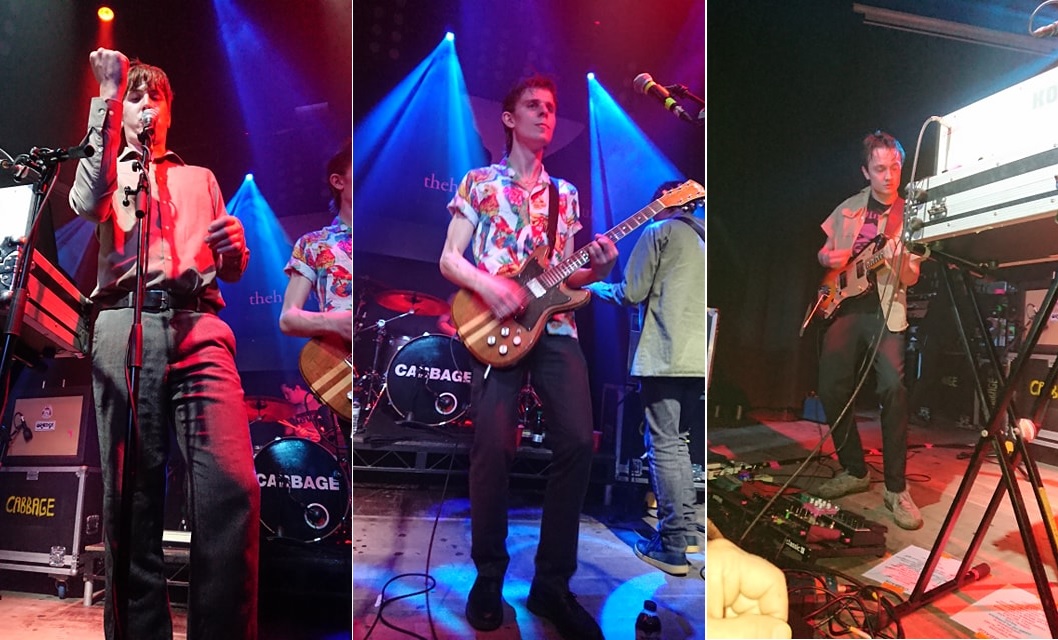 The unsung hero, Asa Morley on drums named after the 70’s footballing superstar Asa Hartford, put in a wholehearted performance and this did not go amiss when one young fan took the microphone to shout his praises.

The set was finished off in true Cabbage style with two of their live show classics, their first single ‘Kevin’ and the wonderful ‘Necroflat In The Palace.’ The whole crowd sang along with passion, verve and anger to the lyric “I was born in the NHS, I wanna die in the NHS.” This was crowned with some topless crowd surfing from Joe. 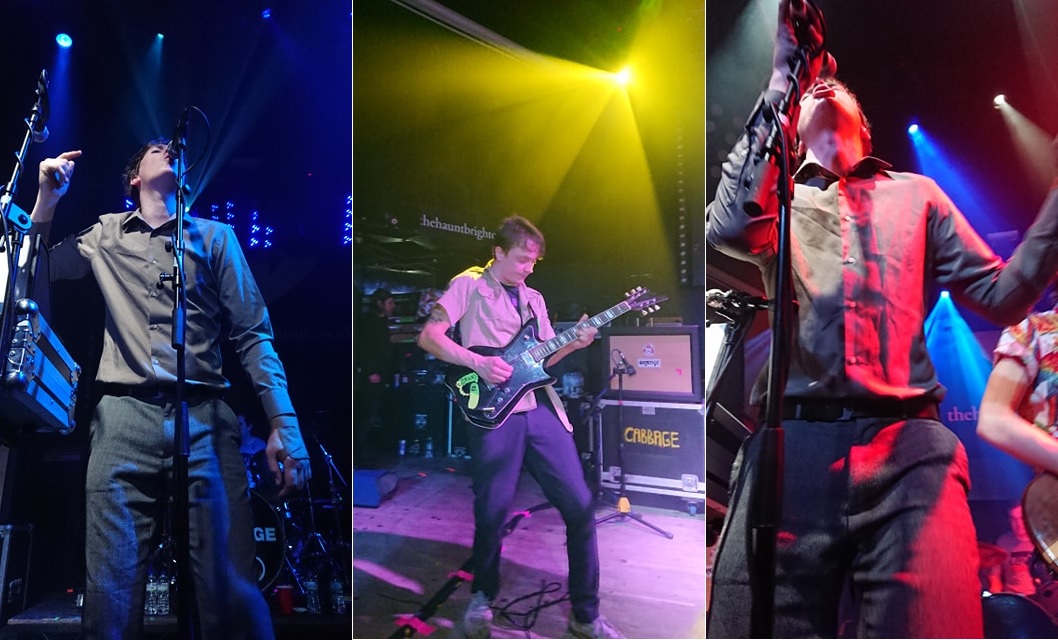 As much as I would love to have heard them played live I can forgive the boys from Mossley for not playing ‘Preach To The Converted’ or ‘Postmodernist Caligula.’ My only real disappointment of the evening was not purchasing a ‘Born in the NHS’ t-shirt as they only had small and XL left due to my procrastination. Therein lies the warning that we must not wait until it is too late to save our NHS so please don’t be like me and act now before it’s too late.

Most of the band came out for a chat post-gig, even Joe who told me that he had a throat infection not helped by playing five nights in a row. I also got the lowdown on the wrist splint: the band had only been in Bristol for an hour the day before when as Lee was crossing the road, a scooter came around the corner and hit him before speeding off never to be seen again. Thankfully a more serious injury was averted, and Lee though obviously shaken up was still able to continue with the tour. 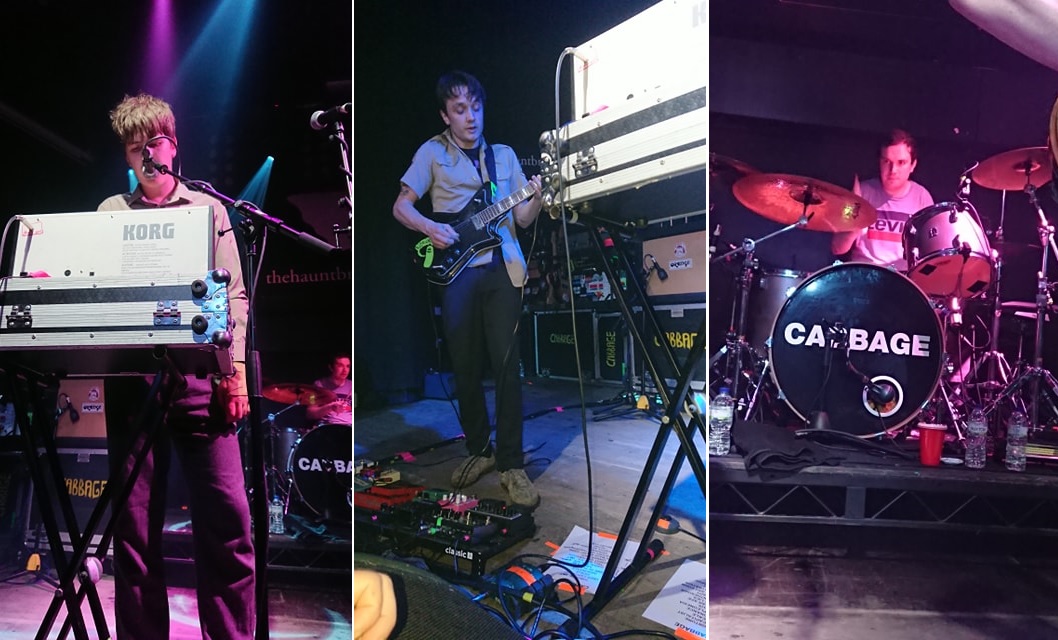 So, in answer to the question I set earlier on, Cabbage proved themselves to still be an exciting live act in spite of struggling with their health issues. The uncertainty and often chaotic nature of their shows make them all the more special. Maybe they weren’t quite at the top of their game, struggling through due to their various ailments, but you still won’t see many better live shows this year that are a patch on this. If you have an appetite for raucous music then you really need to get some Cabbage in your diet. 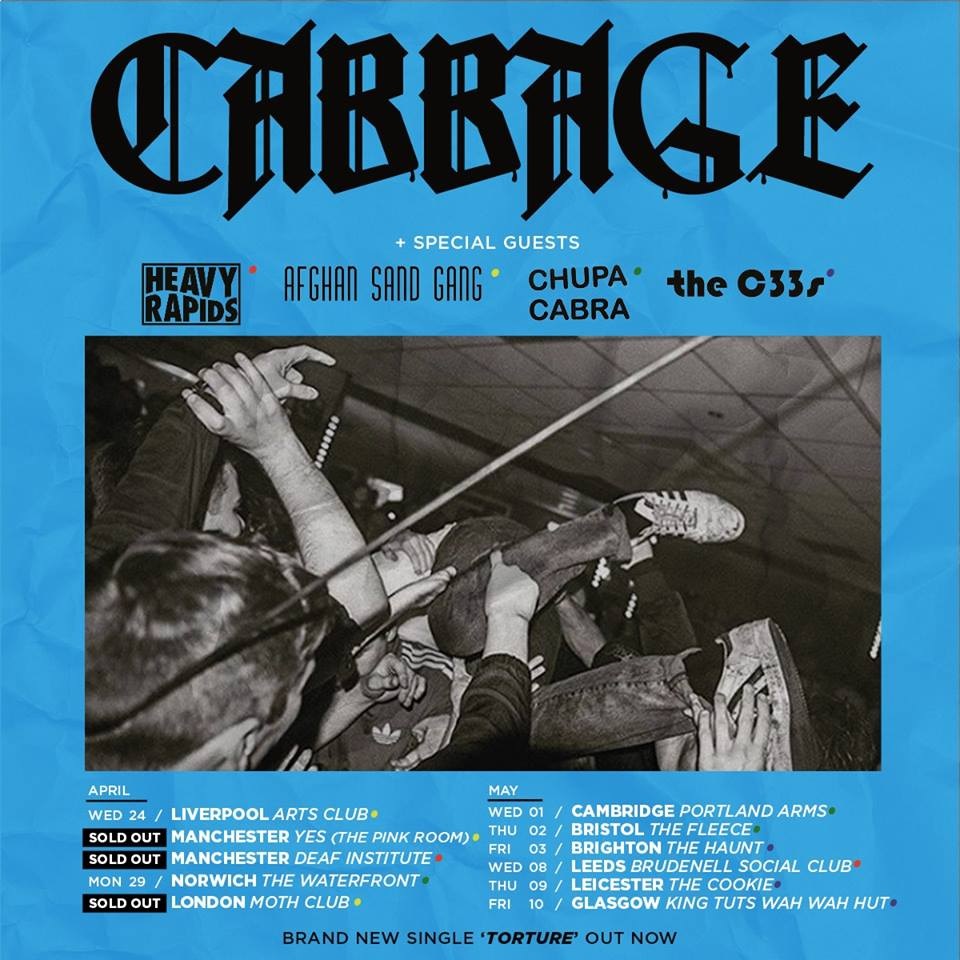 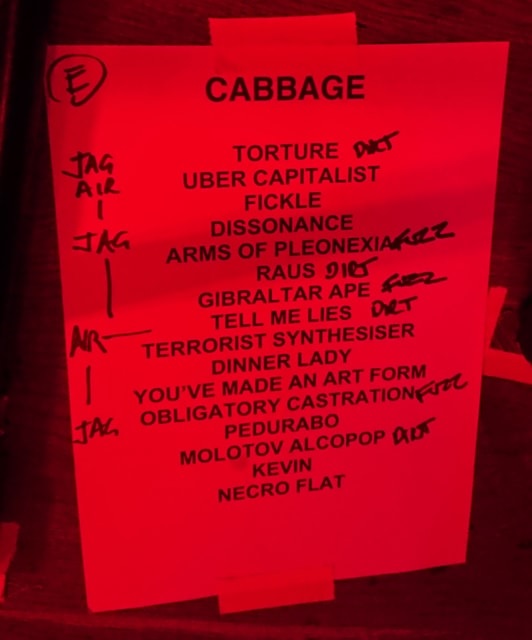 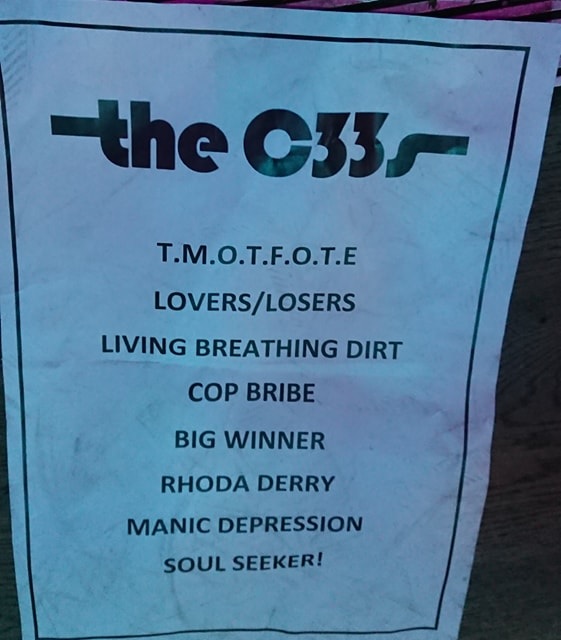