A Brighton music venue and night club has applied to sell alcohol from its new premises.

The Haunt is moving from the Savoy Centre in Pool Valley to another part of the same complex – the old Days restaurant which was formerly the ABC cinema, in East Street.

The owner Matthew Dimmock wants to the venue to stay open at its new site until 4.30am, with drinks on sale until 3.30am.

He had already been granted a licence last September to operate the club out of the old Dirty Blonde bar’s site in East Street until 3.30am.

But in March Mr Dimmock was granted permission to convert the former Days restaurant into a night club, live music and entertainment venue.

When the site became available, he felt that it was better suited to live music than the old Dirty Blonde.

He said that he would be prepared to accept extra conditions on the licence including tamper-proof noise limiters on the sound system and for the bottle bin to be emptied only between 7am and 10pm.

He also agreed to surrender his licence for the Dirty Blonde site.

There are six objections to the application, including one from Debbie Gibson-Leigh, who chairs the Brighton Old Town Local Action Team.

She was concerned about noise, nuisance, public safety, crime and disorder and the protection of children.

She was also concerned that Mr Dimmock had not communicated with neighbours about his plans every three months as requested when the Haunt was expected to move to Dirty Blonde.

She said: “This is a large capacity venue with the potential for hundreds of people to disperse at the same time as other late-night venues in this small area of East Street, causing noise and disturbance to residents and probable drunken anti-social behaviour issues for Sussex Police.

“It is likely residents in Clarendon Mansions will suffer noise nuisance from customers milling around outside while waiting to enter the venue late at night, cigarette smoke will intrude into bedrooms and living areas and potential public safety and disorder issues could occur if queuing is not managed carefully.” 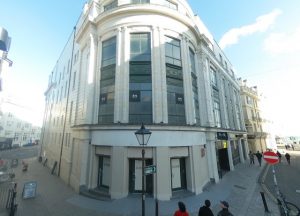 In his letter of objection he also raised the venue’s crowd capacity which would treble from 300 to 900.

He said: “Removing the current 300-capacity venue will eliminate a vital rung on the ladder for small up-and-coming artists. Local grass roots artists do not play venues that have a 900 capacity.

“Ironically, the new 900-cap Haunt would actually need the current location (which would close under this proposal) to still trade and act as a feeder venue for this new space to be viable.”

Sussex Police and Brighton and Hove City Council’s licensing department have objected to the application, because the venue is in the council’s cumulative impact zone.

New licences are not normally granted for pubs and clubs in the cumulative impact zone which is deemed to have reached saturation point for licensed premises.

The council’s environmental protection team has also objected to a new licence because of concerns about noise from customers queuing and smoking outside the premises.

Grosvenor Casino has planning permission take over the Haunt’s existing space in the Savoy Centre, formerly the Pool Valley side of the old ABC cinema, once the Haunt is operating in a new venue.

In March the venue was given planning permission to move into the former Days restaurant site in which was the Toad pub from 2000 and 2009.

A licensing panel of three councillors is due to discuss the application at Hove Town Hall on Monday 3 June.