Burglars on bikes stole two cash registers and an unknown sum of money from a seafront restaurant in Hove yesterday (Thursday 30 May). 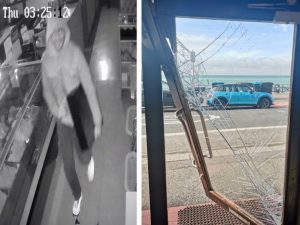 The break-in – at Marrocco’s in King’s Esplanade – happened at about 3.15am when two people forced their way in.

They caused damage estimated at £2,000 to the restaurant which often has long queues for its ice creams on hot sunny days.

Sussex Police said today (Friday 31 May): “Police are investigating a burglary at a restaurant in Hove.

“Marrocco’s in Kings Esplanade was broken into around 3.15am on Thursday 30 May.

“Entry was forced, causing around £2,000 worth of damage, and once inside two men stole tills containing an unknown quantity of cash.

“They then left the premises on bikes with what appeared to be a third suspect.

“Forensics investigations have been carried out at the scene and police are appealing for anyone with any information to report it online, or call 101, quoting serial 235 of 30/05.”