A Brighton man has been jailed after a racist rant at a mother in a Hove shop – in front of her young children. 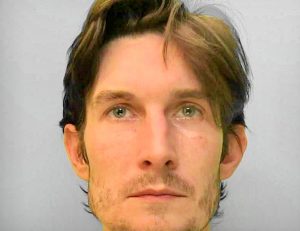 Robert Lonsdale, 37, of North Road, Brighton, went on a wrecking spree, armed with a knife, and stole and spewed vile abuse in shops and the streets near Hove railway station.

He was jailed for 33 months at Lewes Crown Court for seven offences having gone on a rampage in a Tesco Express convenience store and the nearby Esso garage shop.

It was not the first time that Lonsdale had racially abused someone in a shop. Two years ago he was caught shoplifting from the Co-op in Western Road, Hove, and was convicted after aiming a racist outburst at staff there.

Sussex Police said this morning (Thursday 6 June): “A Brighton man who went on an anti-social behaviour spree has been jailed.

“Robert Lonsdale, 37, of North Road, Brighton, appeared at Lewes Crown Court on Thursday (23 May) to be sentenced for seven different offences.

“Officers were alerted by staff in Tesco Express in Denmark Villas, Hove, on (Saturday) 12 January to reports of Lonsdale being in possession of a knife.

“Unemployed Lonsdale took and then threw a sandwich from a shelf, threatened to harm the staff and ran away.

“Lonsdale then crossed the road and entered the Esso garage where he racially abused a woman in front of her two children.

“He then attempted to steal a mobile phone off a staff member. When he was unsuccessful, Lonsdale assaulted the young man and threw a number of items on the floor causing £100 worth of damage.

“Lonsdale was arrested in a nearby road following further calls from members of the public about a man throwing bottles in the street.

“He was charged with possession of an offensive weapon in a public place, theft from shop, racially aggravated intentional harassment or alarm or distressing words, affray, attempted theft from a person, criminal damage and the possession of cannabis.

“Lonsdale was sentenced to 33 months in prison, to include a nine-month suspended sentence which was activated in full.”

Investigating officer Rose Horan said: “Lonsdale showed a complete lack of regard for his community by his boorish and anti-social behaviour, brandishing a weapon in a supermarket and using foul and unpleasant racist language towards a mother in the presence of her young children.

“Once the defendant was inside the garage, he used violence towards the young attendant leading him to believe he had come into contact with Aids, and caused extensive damage within the premises.

“In the interview Lonsdale admitted he was intoxicated while the offences took place and, despite being shown CCTV, he couldn’t remember committing some of the offences.

“He even admitted that if he had realised the sandwich he had taken from the shelf was cheese and pickle, he would have eaten it and not thrown it back.

“We welcome the sentence Lonsdale has been given by the courts and hope it sends out a clear message to those who carry knives and target individuals based on their race and that it provides some justice for those involved.”