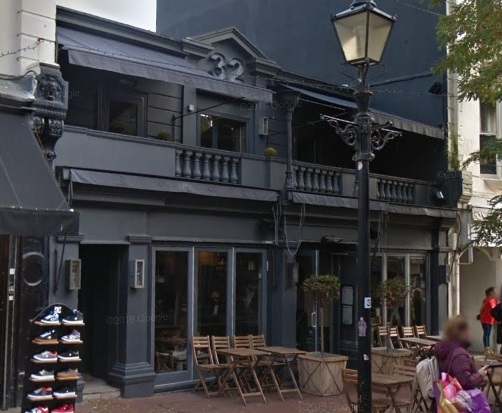 A city centre restaurant with a history of rodent infestations was warned it could face action when a council inspector spotted a mouse during a routine visit.

Number 32 in Duke Street had managed to get its act together following a disastrous year in 2016 when it was given a hygiene improvement notice in January and then a caution six months later.

It had pulled itself up to a four star rating – but when an inspector visited again on 11 March this year, they uncovered not just mice but a catalogue of hygiene breaches.

The council subsequently wrote to the venue to warn it was considering what action to take.

The report said: “We were concerned to see a live mouse crossing one of the loft hatches, droppings on the floor of the staff room, spilt bait, pest proofing issues, lack of written procedures, inadequate staff training and poor standards of cleaning and maintenance.

“Similar contraventions have been brought to your attention on previous inspections.

“Whilst your business was given a food hygiene rating of 4 out of 5 on the last routine inspection, this followed ratings of 1 for very poor standards seen on previous inspections on 19 January 2016 and then 22 July 2016, for which the company accepted a simple caution.

“A Hygiene Improvement Notice had been previously served on you on 27 January 2016 requiring you to put an effective food safety management system in place.

“It was disappointing to see the same breaches of food hygiene legislation occurring in your business again now. You must act promptly rectify these matters.

“We are currently deciding what course of action we will be taking for these repeated breaches of the law. “

The report noted that the chef said he had seen a dying mouse going across the kitchen floor a couple of months beforehand.

The inspector also found a dishwasher drainer used for utensils which had become black with mould.

Chopping boards were washed by hand, and one of the sinks had no hot tap.

Ice cream scoops were stored on top of the dusty ice machine, there was no soap in the wash basin, a food handler  had dirty fingernails, and cheese and sauces were left at room temperature.

Cigarette ends were also found in the staff room.

The inspector said a deep clean was needed throughout the restaurant.

Number 32 was given one star, which still stands as the most recent rating on the Food Standards Agency website.

Saltden Spice in Lustrells Vale, Saltdean was visited on 19 March and Saffrons in Whitehawk Road the following day.

Saffrons agreed to close for a deep clean after the inspector found “filthy” walls and floors, particularly behind and under equipment.

In both Saffrons and Saltdean Spice, the inspector found evidence of mouse infestiations, no hand washing or aprons, no working hand wash basin, badly cleaned chopping boards, pans and utensils and prepared chicken and rice were kept at room temperature during service.

Yummie Grill in Islingword Road, Brighton was given one star and three hygiene improvement notices following two visits on 11 and 12 March.

The hygiene notices require the owner to ensure their food safety management system covers all dangers, staff are adequately trained and supervised and to provide hot water to the wash hand basin in the kitchen

They were issued after the inspector found:

A handful of other restaurants were given one star ratings.

Chopstick Express, Baker Street, Brighton, was inspected on 28 March when the inspector found:

Hove Tandoori, Church Road, Hove was inspected on 26 March when the inspector found:

Noori’s, Ship Street, Brighton was inspected on 14 March when the inspector found:

Phoenix Cafe, London Road, Brighton was inspected on April 3 when the inspector found:

It agreed to close for a day for a deep clean, following which the inspector was happy for the cafe to reopen

The New Club, Kings Road, Brighton was inspected on 5 March when the inspector found:

Wing Hong, Meadow Parade, Rottingdean, was inspected on 19 March when the inspector found:

Yefsis of Hove, Lansdowne Place, Hove, was inspected on 2 April when the inspector found: