Moulsecoomb staff say they are prepared to strike over academy plans

Teachers and teaching assistants at Moulsecoomb Primary School have voted unanimously to say they’re willing to strike over Government plans turn it into an academy.

Reps from both the NEU and GMB, which represent teachers and teaching assistants, announced 100% yes votes on indicative ballots at a packed meeting of the Hands off Moulsecoomb School campaign last night.

One of the school’s parent governors also resigned in protest so he could fully support the campaign.

And the councillor responsible for Brighton and Hove City Council’s schools said that although he has a statutory duty not to oppose the duty, he also has a “moral duty”.

The meeting, held at the school, was arranged by parents in response to the Department for Education issuing an academy order following an Ofsted report which rated the school as inadequate.

The government is now trying to find a sponsor to take on the school, and an announcement is believed to be imminent.

Governor Warren Carter, whose children have attended the school, said the inspector’s verdict could not be further from the truth.

He said: “Failing is not the word I would use for this school. Compassionate, inclusive, welcoming and fun – and a massive part of this community.

“Instead it’s been put on the naughty step for being poor, inclusive and for trying to do the right thing.

“Just because you are not academic doesn’t mean you are stupid.

“Many schools would show these pupils the back door or not let them in, but this school bends over backwards to find a way to accommodate those children who aren’t academic and need extra support.”

Nick Childs, new chair of the council’s Children, Young People and Skills Committee, said the Ofsted report had been the first thing that had landed on his desk following his election and appointment last month.

He said: “That’s not an inadequate report – the school is in a clear trajectory of improvement.

“This year’s data on KS2 will again start to show the transformation, but it takes time.

“There’s an excellent headteacher who had only been in place for less than a year.

“I have two statutory duties, but I have one moral duty.”

Announcing the ballot results, Jo Viner from GMB said: “This isn’t a shy branch of members and if they need to take action, they certainly will.”

NEU rep Phil Clarke told the meeting: “A combination of staff, parents and the local authority against this should be very, very strong.”

The GMB ballot had 100 turnout, and the NEU one, which is still open, currently has a very high response rate.

Matt Webb from Unison, which represents support staff, told the meeting it was also in the process of balloting its staff.

Governor Pete Weston, who is also the co-chair of Moulsecoomb local action team, resigned as governor at the meeting so he could support the campaign “100 per cent”.

He said: “What they’re trying to do here to our wonderful teachers and terrific head is absolutely disgusting.

“How can we hear 18 months ago from Ofsted that our school requires improvement, and then our percentages have gone up to around the national average, and we are now inadequate?

“What do they want? Blood out of a stone?

“I’m resigning as a school governor in protest at this and will give you 100 per cent backing in stopping this school becoming an academy.”

One parent spoke of his fear of what will happen to his son if the school becomes an academy.

He said: “My son took a year to find a school that would accept and work with him.

“Since he’s been here, he’s really improved. He’s still got a very long way to go because he’s so far behind.

“He would be one of the first ones they push out and that scares the hell out of me because where will he go then?

“His whole education is in jeopardy if we become an academy.”

Another mum who moved to Brighton from Devon last year told a similar story.

Amy Simms said that since joining the school in September unable to read, the school and council’s support had enabled him to become an average reader.

She said: “I believe that he counts as a person, not a number at this school.” 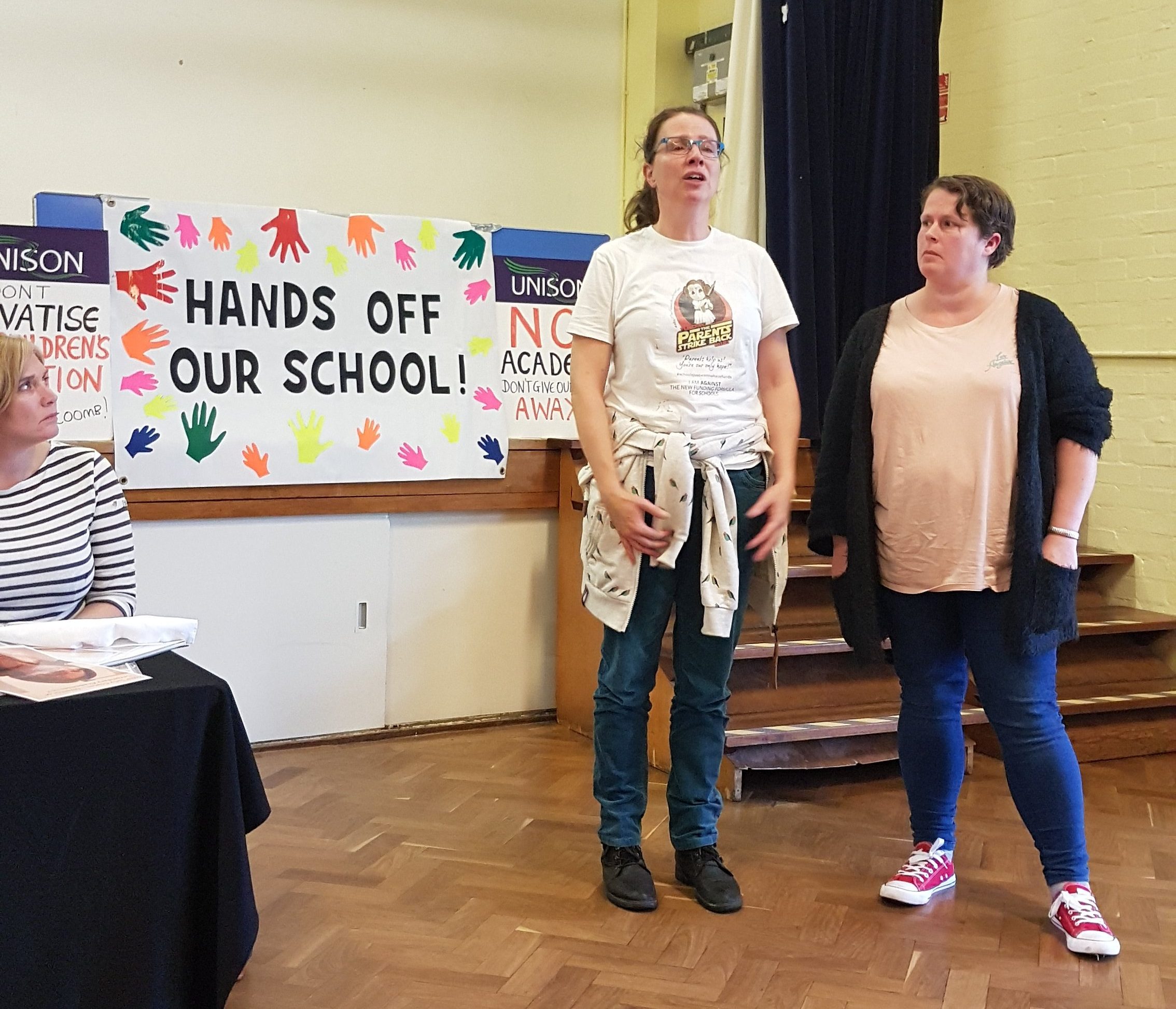 Heike Golightly, one of the parents who has launched the campaign, said: “We really need your support as parents because we can’t do this ourselves.

“I want the best for my child, and this school is that and we are sticking with it.

“He’s happy, he’s running down the hill every morning.”

Fellow campaigner Angela Pemberton, whose children have recently left the school, said: “My son is severely autistic and what this school and the headteacher he would not be where he is today, at a mainstream secondary school.

“I believe without this school he would not be there.”

The head of Downs Infant School Hildi Mitchell also spoke on behalf of heads throughout the city who are supporting the campaign.

She said: “There’s a number of us here who are absolutely determined to do everything we can.

“We are listening to your community  and it’s bringing tears to my eyes.

“If I heard my school described the way your school is being described, I think I could retire. These are the things I would dream to hear.

“Your headteacher Adam Sutton knows your community, he knows what your school needs.

“We stand absolutely behind keeping this school in local authority control.”

The meeting also heard from Brighton Kemptown MP Lloyd Russell-Moyle and a statement from Brighton Pavilion MP Caroline Lucas, both of whom blamed Government cuts to school funding for the Ofsted shortcomings.

And people from anti-academy campaigns in Lewes, Peacehaven and Greenwich also shared their experience and advice.

Campaigners asked people to sign the petition, which has now topped 2,000 signatures, and to pledge what support they can.

After not working for years, Brighton station lift should reopen next month