Terrific night of music at the Green Door Store 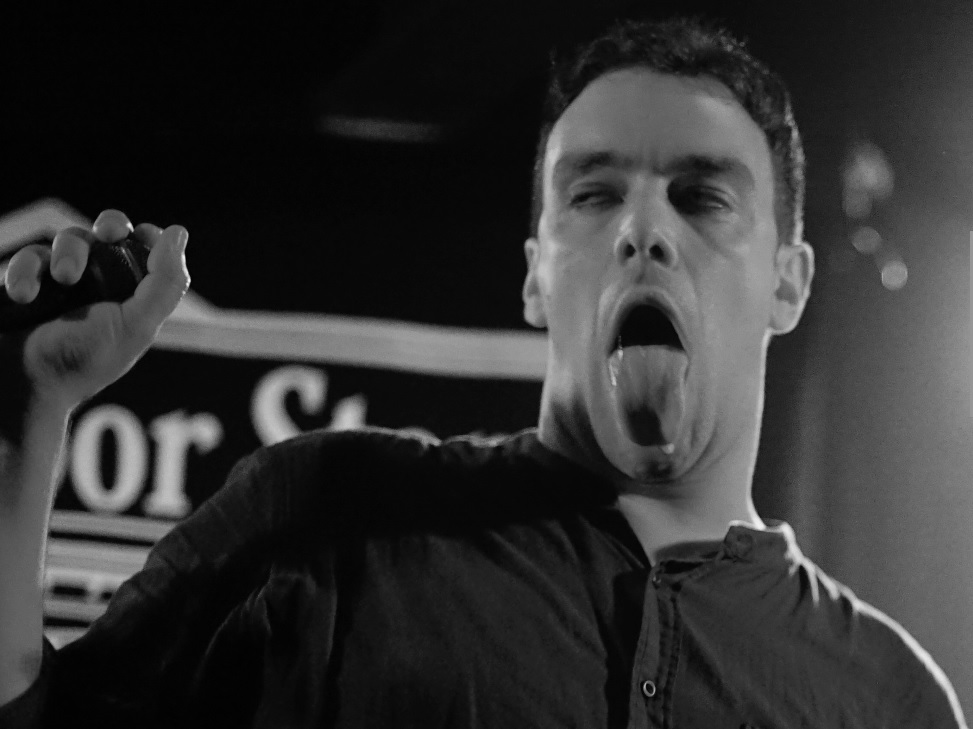 The weather has turned a bit pants and things generally were a bit below par with stresses of work and life in general. The only option was to grab a last minute gig in Brighton in order to relieve the stresses of modern day society.

We came to the conclusion that by far the best option was on offer at the charismatic Green Door Store located at 3 Trafalgar Street, where there were no less than four bands plying their wares. It surely was a no brainer.

Wilf and Rachel from the Brighton based ‘Ban The Disco’ promoters had assembled the quartet of choice acts (Damn Teeth, Human Leather, Swoon, Plastics) appearing at the venue this evening. Three of which were unknown to us and so as they say ‘we took a punt’ on this, and thank God we did, as we had a truly marvellous time.

It seems as though Rachel and Wilf have certainly got their ears to the ground in selecting an array of interesting up-and-coming bands and so you can expect more local offerings from them in September and December – so keep your eyes peeled. 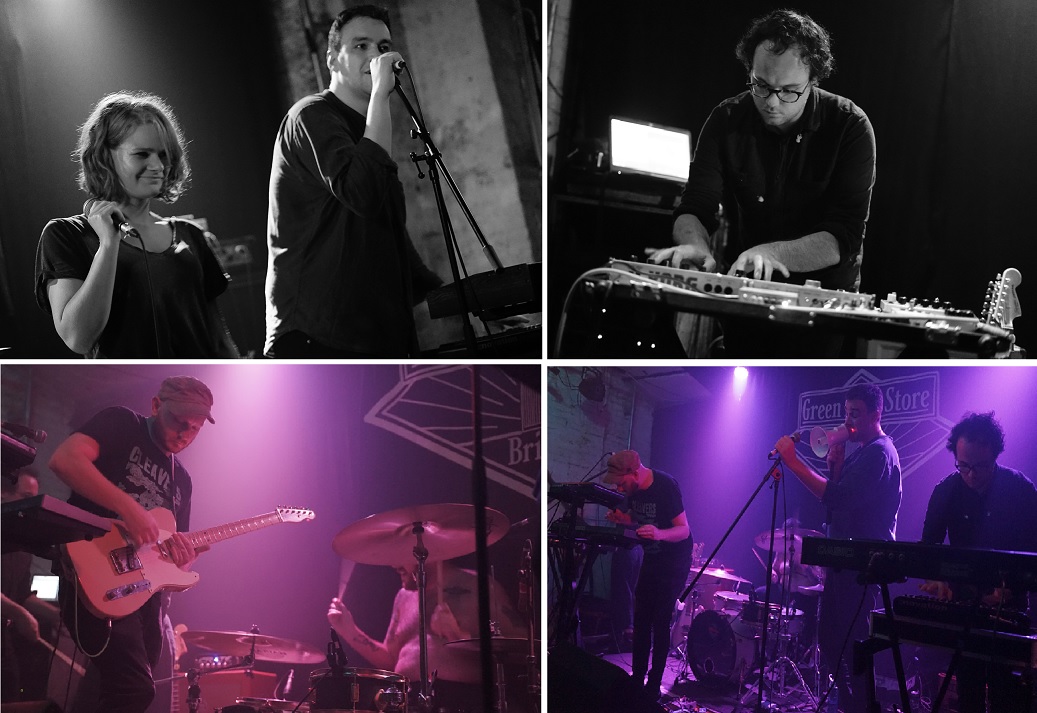 Headliners tonight were Damn Teeth who are a Glaswegian based shouty synth-punk outfit who are Paul McArthur, Sean Campbell, Stewart Allan, Seonaid Stevenson, and Niall Sinclair. Sometimes Kate Stonestreet appears with the band but not tonight. They are currently in the middle of their UK tour at present, having hot-footed it from the previous gig in London at The Old Blue Last.

Thankfully for us they are in love with Brighton and will use any excuse to come down and play here, so I certainly hope that they make a swift return as their set was terrific! We certainly had synths-a-plenty tonight, with often a trio of band members tinkering away at the two Novations, Casio, Roland and Korg keyboards on stage. They are a versatile lot as they were often switching instruments just like the mainly Brighton based Laish tend to do.

Their synth-punk sounds for me were loud and lovely and I certainly would rush to see them perform live again at the drop of a hat. If you could imagine IDLES as a synth-punk outfit then you have Damn Teeth. I would certainly liken them to a combination of the USA’s finest Sextile meets Bristol’s Sheep On Drugs, but with a more conventional dress code. You can also throw into the mix Killing Joke’s ‘Pssyche’ meets the Birthday Party and a heavy version of the B52’s meets The Fall’s ‘Totally Wired’ on speed.

Their most enjoyable set consisted of ten numbers and there wasn’t a badun in amongst them whatsoever. 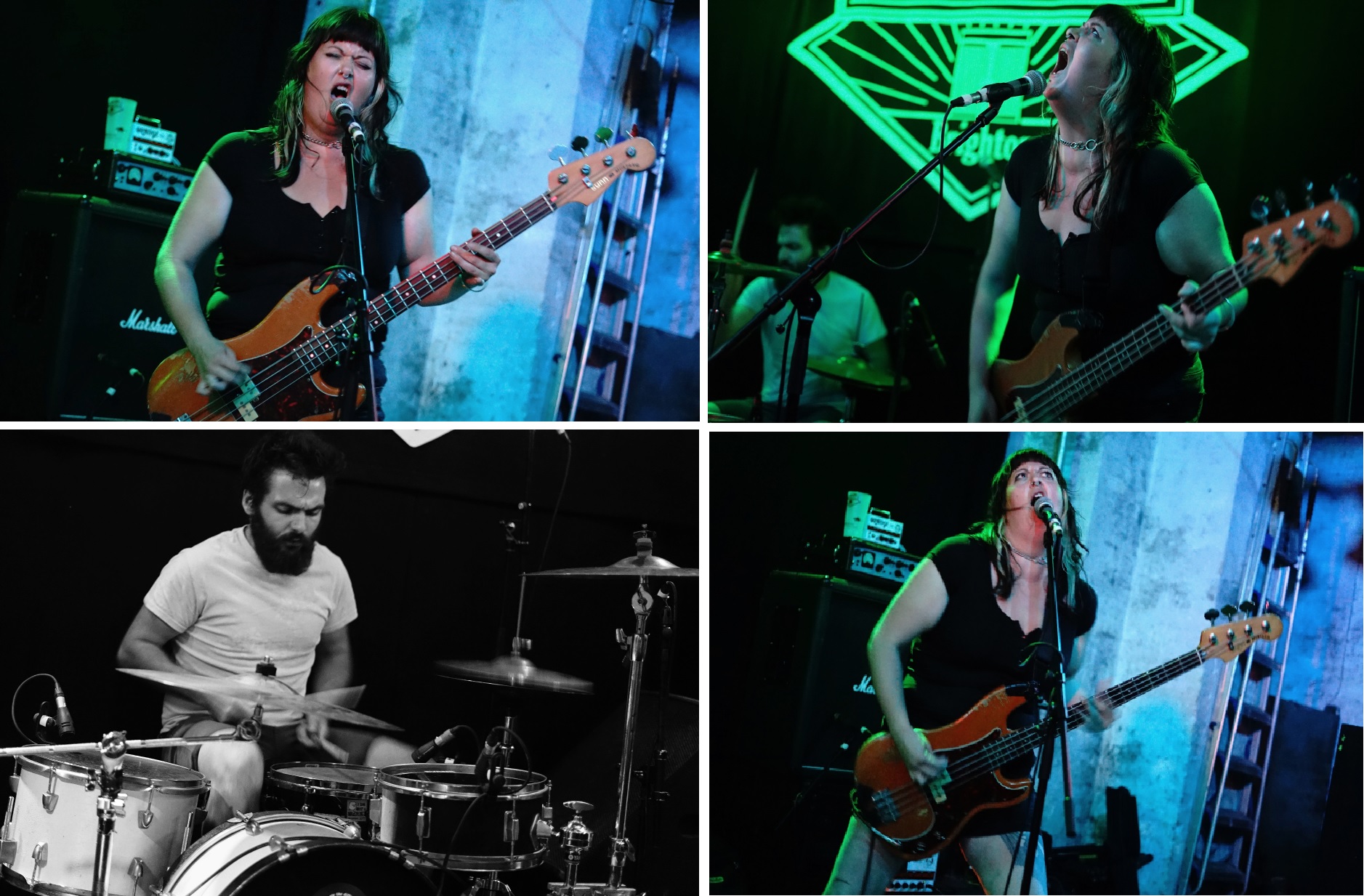 The penultimate act of the night was the unbelievably guttural Human Leather, who have been plying their sound for three years now, with axegirl Amee having come to Brighton a decade ago from Nottingham and drummer Tom heading west from Kent.

‘Once seen – never forgotten’ should be this bands motto. Jeezus are they raw, fast, heavy and loud. Just prior to arrival, I had given my mate the nod about this duo as he’s not really a fan of the delights of Extreme Noise Terror and heavy Discharge tracks, but he endured and they simply won him over by dragging him across the speed merchants threshold.

Their message distortion takes no prisoners and it’s inconceivable just how much power two people are able to make. After their set Amee was trying to explain to the bewildered yours truly about the split pedal offering up guitar and bass with only a guitar, but it totally lost me as I was still in shock. Tom’s drumming was akin to Animal from The Muppets, as he was so fast that his stix were a blur. I have a feeling that he’s possibly the fastest drummer I’ve ever seen. He was even salivating into his beard. On the other hand, Amee’s vocals at times digs so deep that she has found long lost primordial sounds that were certain to never be heard again. One hopes they practice in a soundproof studio, otherwise their neighbours will suffer from tinnitus. Into hardcore punk? Then this lot are a must see band and I would go along again for the thrill of the ride.

Listen to them HERE if you dare. Ear defenders at the ready! 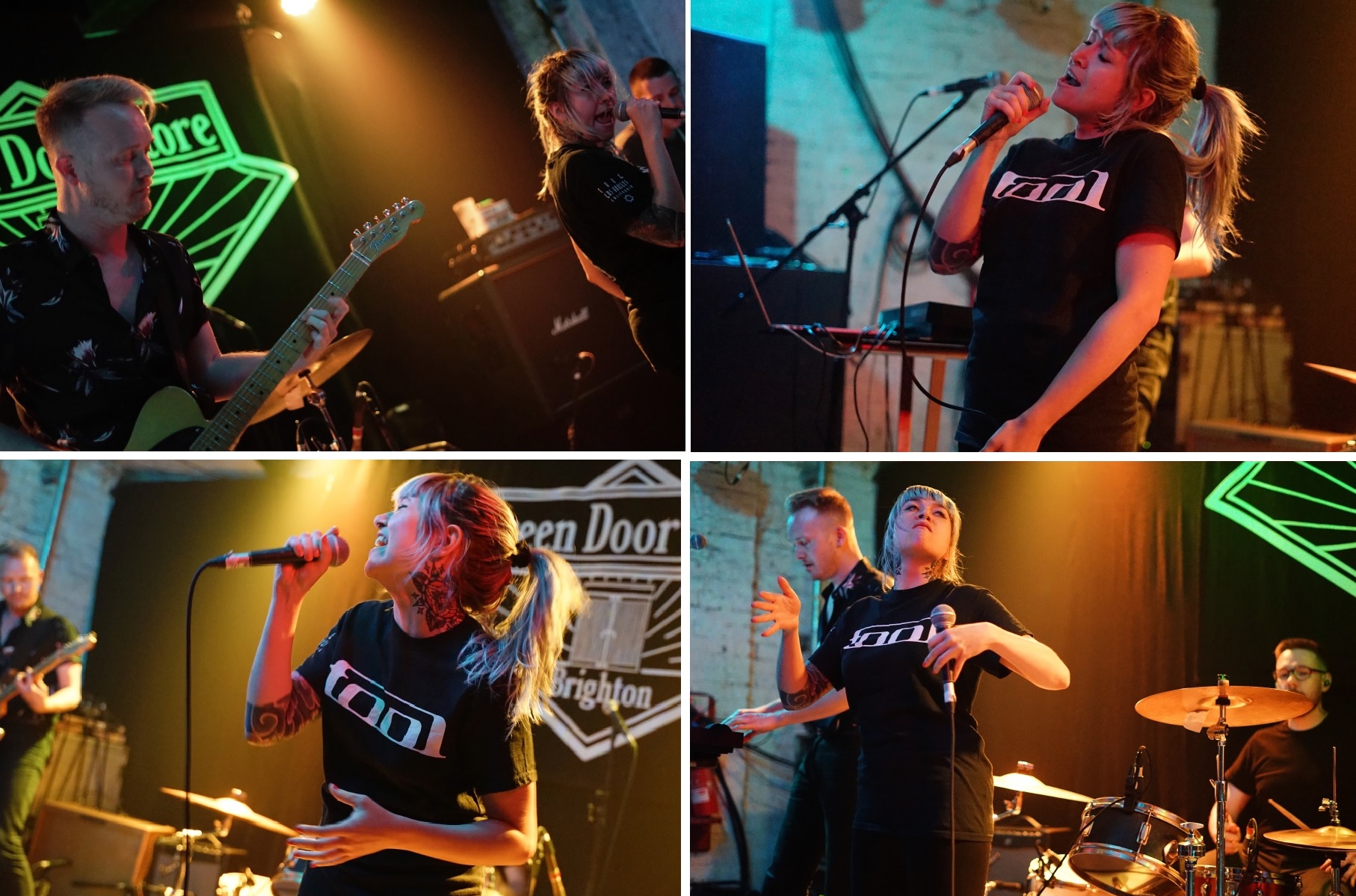 The second band on tonight were the only act that we had previously seen and seriously enjoyed before and so we knew that once again we were going to enjoy the set from Brighton based Swoon.

Their personnel are really lovely people and are headed by the charismatic and expressive Italian vocalist Alice Guala. Her bandmates are Adam Macaulay (keys/programming/guitar/vocals), Chris Lelliott (bass/guitar/vocals) and James Aslett (drums). They have toured with the infamous Pussy Riot and have been steadily releasing top quality material since the tail end of 2017.

This evening we were treated to an eight song set, with everyone being a corker. In fact my mate and our photographer both snapped up a copy each of their ‘Fun Police’ 10” transparent yellow vinyl EP, which came out last year on One Inch Badge. Three of the four tracks on this EP had an outing this evening and were superbly delivered by the explosive vocal style of Alice, combined with some fab synth-work. I was rather partial to the heavy bass synth sounds that carry right through your body, that occasionally cropped up during tonight’s set, especially on ‘Heartstrings’. After their set Adam and myself were discussing these sounds and we agreed they were ‘brown sounds’. We will leave it there I think. Highlight of the set was the new single ‘BUBBLE’ which was written about the Brighton music scene. It is an anthem – luv it! Check it out HERE and see if you can spot Camille aka Cammy Ramona (drummer of The Ramonas) who’s in the video and also in attendance tonight was fellow bandmate guitarist Rohnny Ramona aka Maxine. 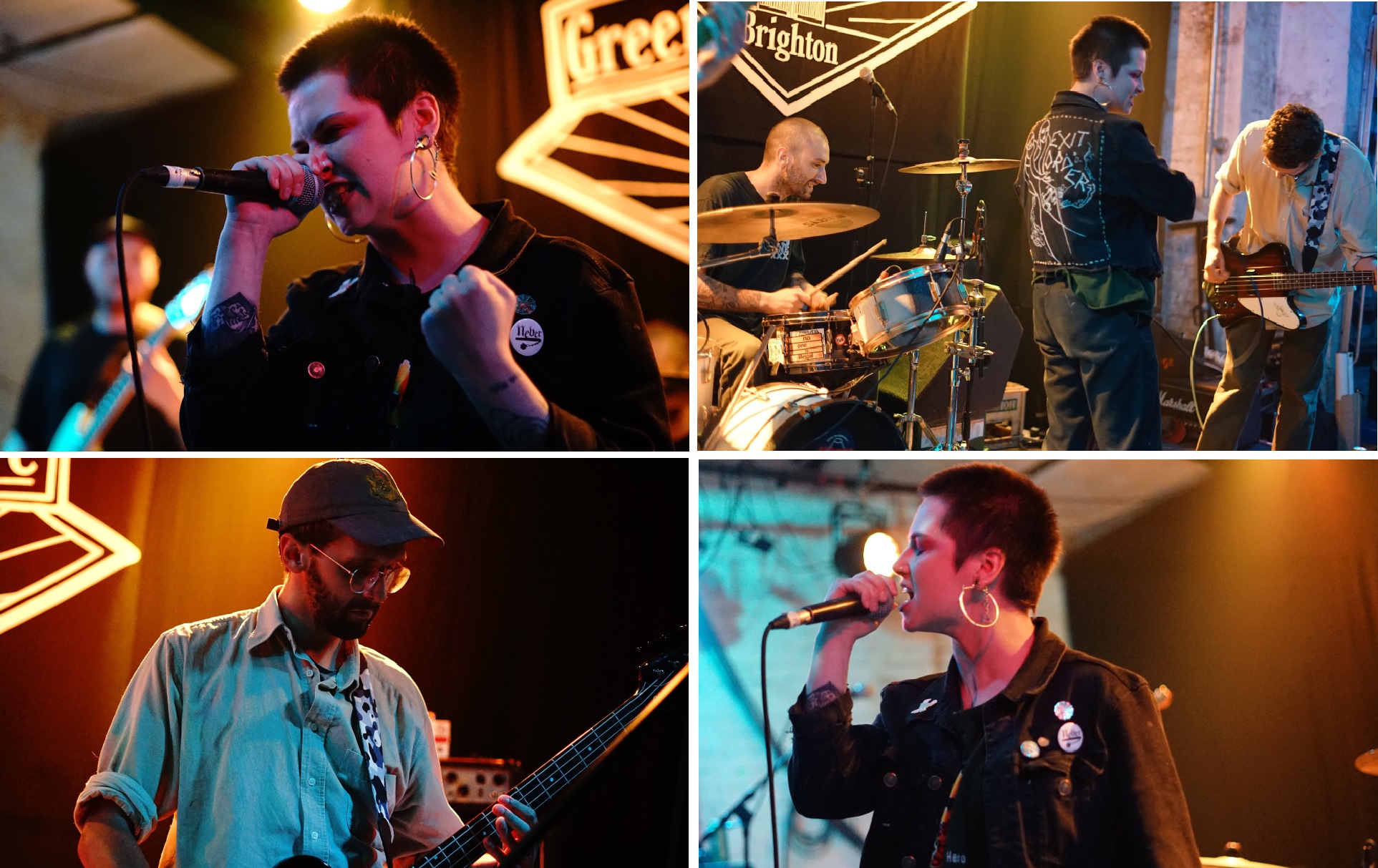 The evening was certainly kicked off in style by the recently formed Brighton punk quartet known as Plastics. Which certainly sounds like an old Brighton band name who would have existed in the late 1970’s and released tracks on Attrix Records.

The band came together in January this year and are led by female vocalist Oli Carter Hopkins along with Sam Rack, James Claringbould and Louis Orm. The four-piece are an out-and-out punk band who would seriously go down well on the same bill as many of the bands performing at Blackpool’s Rebellion punk festival next month. I would really like to see these guys supporting the likes of well established punk bands in order to remind them of their raison d’être. Plastics are shouty loud and it would appear uncompromising in their ethics. They have only written five songs so far and all of them were performed this evening. They are most certainly on the right track as far as I’m concerned and would like to find out more about them via their Facebook page which you can find HERE. Plastics are terrific and I would love to see them live again……and again……and again.

The three of us were very pleased indeed that we ventured out tonight and had a truly great night out. Keep an eye on all four acts as we think it’s well worth it. 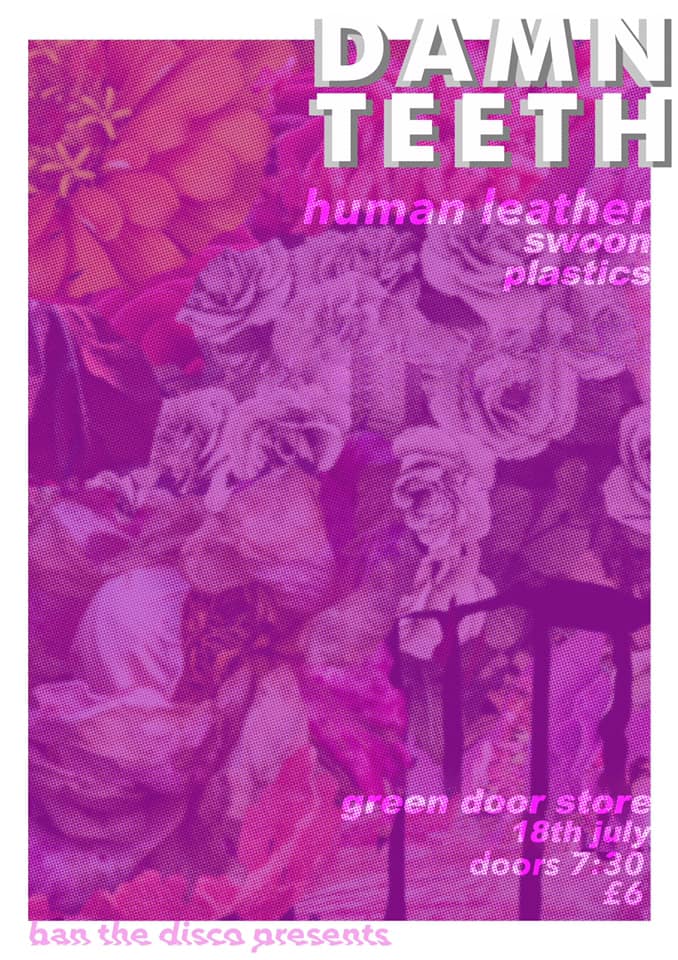