A fire-damaged tunnel under the railway line in Portslade has been revamped and reopened. 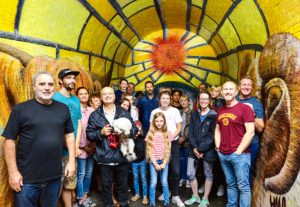 The deputy mayor of Brighton and Hove, Councillor Alan Robins, joined supporters of a project to revive a tunnel dating from the 1840s

Vandals started a fire in the tunnel about six months ago, leaving it severely smoke damaged.

But a group of volunteers from the local community have been to work – with backing from Unilever, the company behind the Cif cleaning brand.

The Friends of Vale Park, who look after a park close to the tunnel, won a grant from Cif’s Hello Beautiful Neighbourhood Project.

The project was facilitated by Semble.org, an online platform to link community groups together with businesses and volunteers to create change.

The grant was received in June 2019 and work to clean and restore the tunnel started soon afterwards.

Local artist HarpoArt added some colour, with a mural incorporating local buildings, the South Downs and a humorous nod to the farming heritage of the “cattle archway” which dates from the 1840s.

Yesterday (Saturday 27 July) representatives from Cif joined the Friends of Vale Park and others to mark the makeover and “reopen” the tunnel.

Jeff Coventry-Fenn, organiser for the Friends of Vale Park, said: “The funding we received from Cif’s Hello Beautiful Project helped get the project off the ground, alongside the incredible hard work of local residents who turned up to scrub and whitewash the walls.

“It shows what a positive difference we can all make when communities work together.”

The tunnel was cleaned and repainted by a group of over 30 volunteers, who cleared away the fire residue which darkened the tunnel. 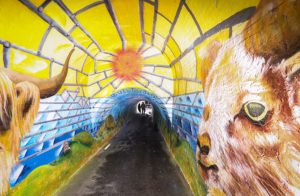 Street artist HarpoArt said: “It’s been great working with Friends of Vale Park on this project and coming up with a design that connects with the local history.

“Having been here all week, it’s been incredible to see people’s reactions and hear stories from residents who have been using the archway all their lives.”

The transformation of the twitten – or passageway – is a powerful example of the positive impact on people’s happiness that can come from restoring the beauty of neighbourhoods, according to Unilever. 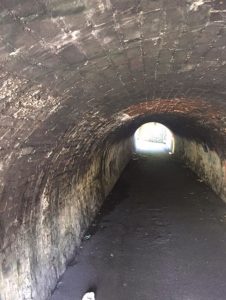 The company’s UK and Ireland vice president for homecare Gemma Cleland said: “Cif prides itself in its ability to clean tough surfaces and help restore them to their original beauty, creating a positive impact on the people around them.

“This is exactly what happened with the transformation of the Portslade Cattle Arch. 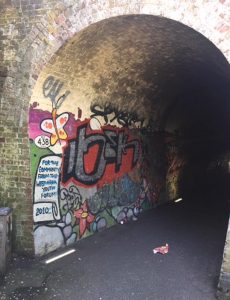 “To work alongside the community to restore the tunnel and create something beautiful is everything we stand for as a brand and we are delighted to have created a lasting change for the Portslade community.”