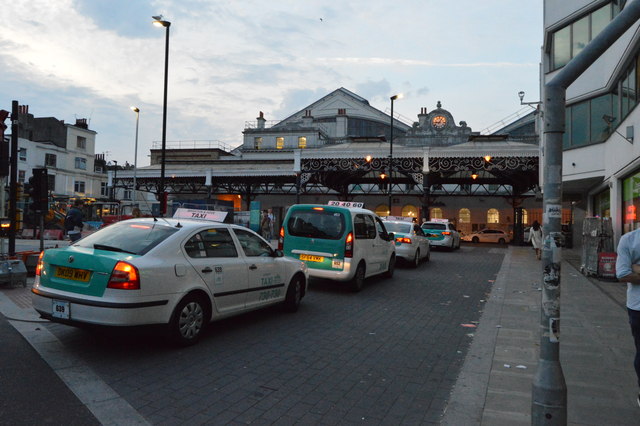 After years of campaigning by residents, the Brighton Station taxi rank is finally to move to the back of the station.

People living in Surrey Street, where taxis sometimes queue to get into the rank, have been asking for it to be moved from the front of the station for some years now.

In 2015, the city council announced it would be trialling a move to Terminus Road – but this was scrapped within days following protests from the taxi trade.

But today, Govia Thameslink Railway (GTR), which owns the station, announced it was moving to the back from November 11 – and again, taxi drivers are furious.

“We have received many representations over a number of years about this issue.

“In response to comments from residents, the local authority and local MPs, we have listened and devised this plan to meet these concerns.

“The relocation of the rank and the ongoing redevelopment of the northern entrance is a partnership initiative between GTR and Brighton and Hove City Council.

“It will deliver a new look to both entrances, a new, larger taxi rank and an improved transport interchange for our passengers, which in turn will reduce congestion.

“We also recognise the potential concern from the taxi trade over the impact of the relocation and we will have a new wayfinding campaign within the station to help passengers find their way to the new rank.”

However, George Beresford of the Independent Taxi Drivers’ union said the new location would add to the already existing gridlock in surrounding streets.

He said: “It’s a disaster for the trade, for the public and for the town.

“It’s an already congested area, New England Street is just gridlock at the weekends and unmanageable from Mondays to Fridays.

“The rank will add 300 cars per hour at peak time to an already overpolluted area and all they have done to accommodate that is put a new set of lights in.

“We’ve spoken to GTR and they say we need to do this because we need to redevelop the front of the station. The council says it’s not their issue, it’s GTR.

“I need to go and speak to the drivers and find out what they want to do, but it’s not something I think we should take lying down.”

Andrew Peters from GMB Brighton and Hove Taxi Section was more circumspect, but said the move will result in higher fares for people wanting to go south.

He said: “For many years the situation of the taxi trade trying to provide a good service for train users has been frustrated by several changes to the station forecourt and road layout with what we understand to be around 300 permits being issued to date for only seventeen spaces with each driver paying the high fee of nearly £1000 per year.

“The trade was made aware of the intended move but to so far has not been any consultation with the trade on the actual layout of the new rank as we could have made recommendations on this including such as matters as disability access. Additionally we are not aware of consultation with any disability groups.

“Furthermore with so many permits issued we have major concerns that providing only twenty-nine spaces will not be sufficient. We understand there is a ‘feeding area ’ but the complete full details have not been supplied.

W”e also have concerns about what will happen when rail replacement busses will also be using the same space.

“Time will tell as to whether moving the rank to the back will work but the clear facts are that both driving to the back of the station and also exiting is difficult at the best of times and any passenger wanting to go southbound will incur higher fares.”

GTR says by reducing queuing through a larger rank, it will improve traffic flow, particularly in the Surrey Street area.

The new taxi rank in Stroudley Street is 50% bigger than the current rank with space for 29 vehicles. There will continue to be space for private cars to drop off passengers, and rail replacement buses will still use the back of the station.

It will enable quicker access to the A270 and A23 for journeys to the north and out of the city as well as maintaining an easy route to the seafront.

For the roads south of the station, the relocation will reduce congestion and remove the bottleneck on the bus interchange.

The new-look northern entrance off Stroudley Road represents a significant investment into the station and the experience of GTR passengers with the continued development of a courtyard area with a café and cycle hub.

At the southern entrance of the station, we will transform the current taxi rank into a welcoming covered pedestrian plaza, which will be used as part of our future queuing plans on major event days – like Brighton Pride.

This will also enable the taxi rank to continue to operate during major events, instead of the current system of temporary closure.