Residents call for rat run road to be closed to traffic

Problems with a rat run off a busy one-way street in Brighton could be tackled by reversing the direction of traffic. 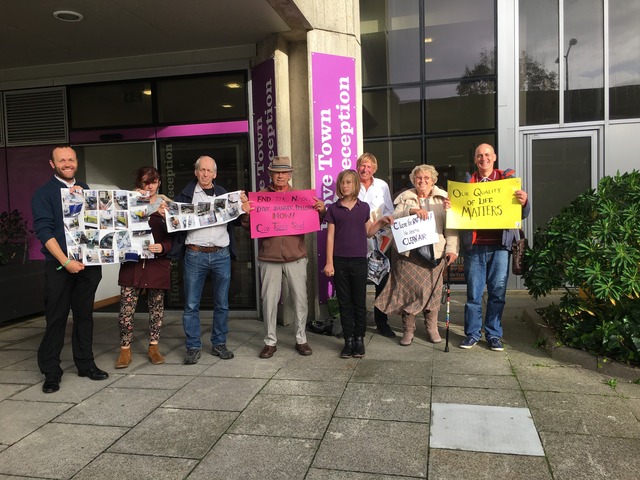 The suggestion follows a campaign by fed up residents of Temple Street, off Western Road, Brighton.

People living in the street called for their road to be closed to traffic, saying that drivers used it as a rat run to avoid the Montpelier Road traffic lights.

They took their complaint to Brighton and Hove City Council’s Environment, Transport and Sustainability Committee.

Members unanimously agreed to ask for a report about their concerns and possible solutions, including how any changes might affect neighbouring streets.

Green councillors Jamie Lloyd and Amy Heley asked for the report at a meeting of the committee at Hove Town Hall this afternoon (Tuesday 8 October).

Green councillor Tom Druitt was applauded by residents when he highlighted their concerns about noise, pollution and safety in the narrow street.

Councillor Druitt said that front doors opened on to the street and, should a child run out, they would be just a few steps away from the road which was busy with lorries and cars using at as a rat run.

He said: “It is incredibly narrow – much narrower than other streets – and it cannot copy with the level of traffic, noise and pollution.

“The pollution just sits there at ground level and the noise rattles in front rooms.”

Councillor Druitt said that Temple Street could be looked at as part of a wider inquiry into rat runs.

Labour councillor Anne Pissaridou, who chairs the committee, said that any road closure would have to be subject to a much wider consultation and the street would be a low priority for this.

She said: “However, listening to the concerns of residents, it may be possible to reverse the flow so it is no longer used as a rat run.

“A traffic regulation order can be considered and we can take this forward as soon as possible.”

Spread of parking zones described as ‘death by a thousand cuts’