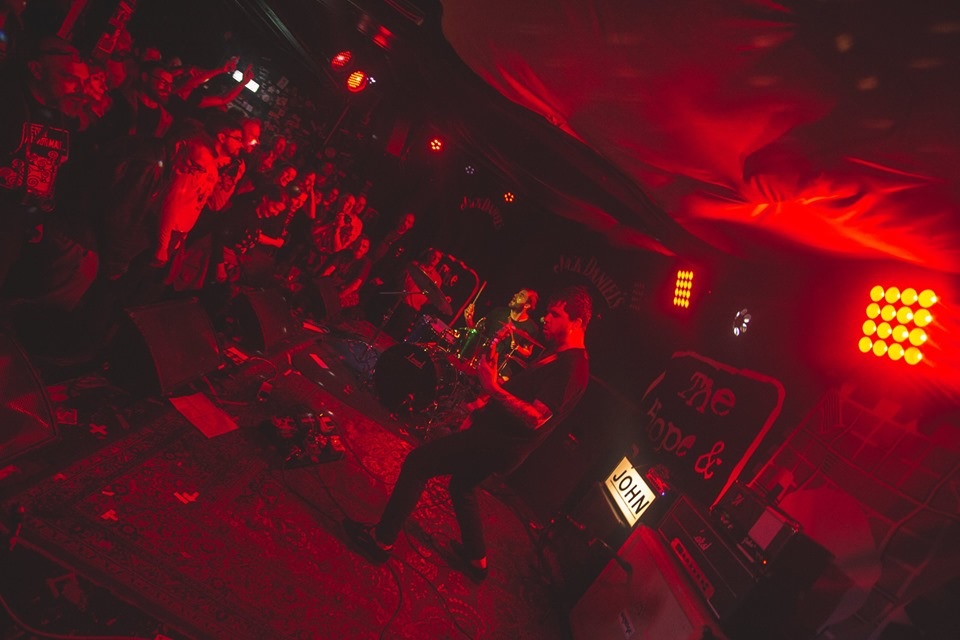 The Hope & Ruin in Brighton was literally buzzing last night, as they had a full schedule of acts on the go. Downstairs Acid Box Promotions internal were putting on an early show from 6pm-8pm with Axis: Sova and LC Pumpkin, whereas upstairs Love Thy Neighbour and Hotwax were staging JOHN’s biggest headlining gig in town, with support from DITZ and Frauds.

Sadly, I wasn’t in town in time to catch the events downstairs, but I arrived at the tailend of the Axis: Sova set and the bar was rammed and the punters were well up for it. A large number of these sufficiently primed humans then queued to get in upstairs for the JOHN gig. They would have needed tickets to get in as the event was totally sold out and so it was going to be a hot sweaty night.

Once entry was gained, I realised that there was an unusually high proportion of IDLES fans present, some of which were wearing their AF Gang badges. Was this a birthday party outing for member Emma and her friends? On reflection, maybe this was due to John having supported the Bristol heavyweights during their 2018 European tour. 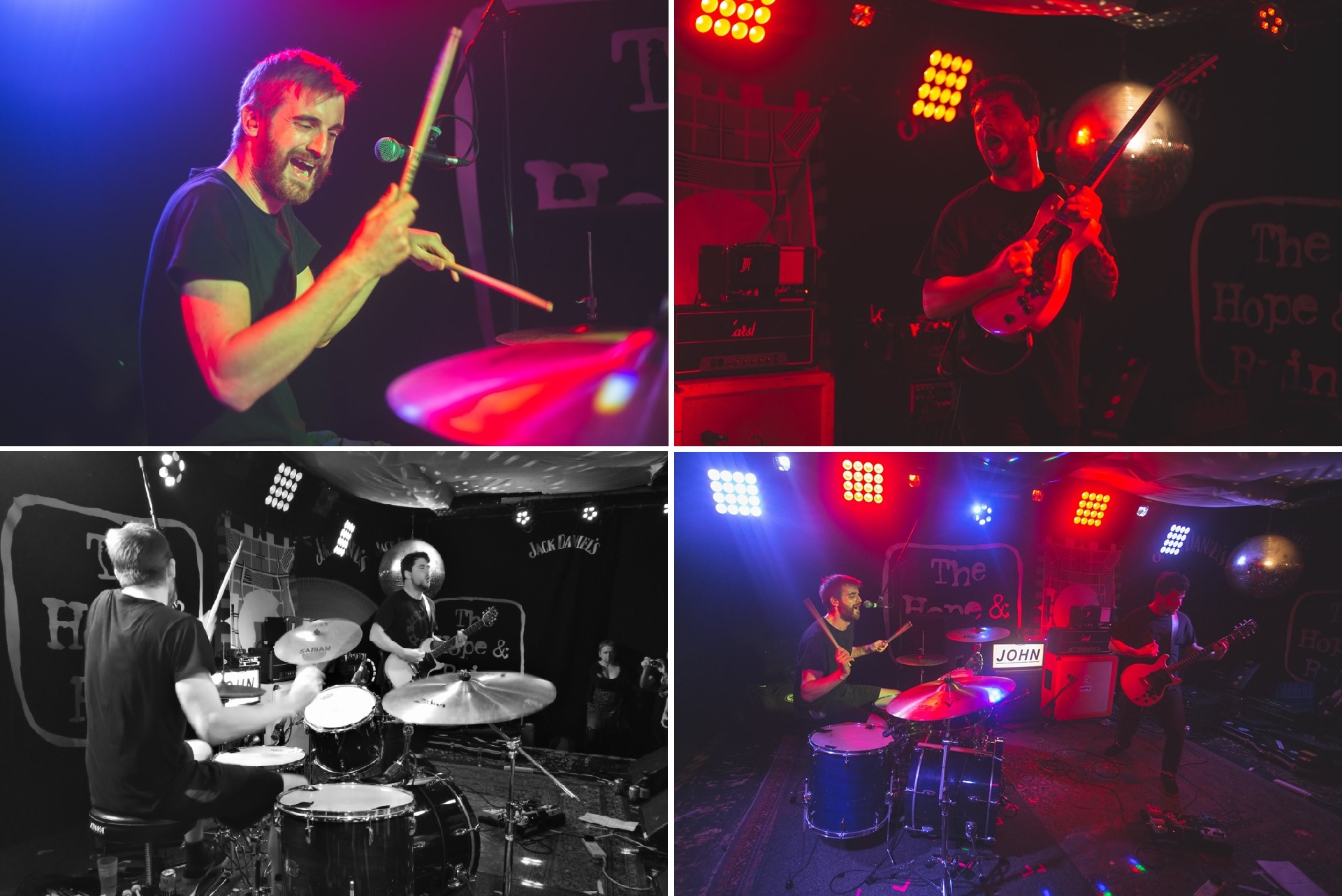 ‘JOHN’ (TIMESTWO) (stylized in capitals) is such a normal name and obviously has its downfalls when endeavouring to look them up on social media, but I guess when you’re a duo and you are both called John, then it seems to make sense. Thankfully they aren’t a trio, otherwise you might get ‘Three Johns’ and that was a band name for the 1980’s Leeds based post punkers and John Peel favourites, who originally consisted of guitarist Jon Langford (co-founder of the Mekons), vocalist John Hyatt and bassist Phillip “John” Brennan, oh and errr a drum machine to boot.

The ‘new’ JOHN’s advertise themselves as “four arms, four legs, two heads, wood, metal and plastic. A band of two Johns from Crystal Palace, London, UK”. The latter part might not be well received by ‘Seagulls’ fans, but we’re talking music here and not footie!

The duo released their acclaimed debut ‘God Speed In The National Limit’ seven track (mini) album in 2017, which has a running time of around 22 minutes, and was initially limited to 200 12” vinyl copies, which were eagerly snapped up, thus they produced another batch of 200, which also flew out the door, as did their CD release of the album. Clearly there was a buzz going down!

Wind the clock forward, after several successful stage sharing appearances with bands such Pulled Apart By Horses, USA Nails and the aforementioned IDLES, as well garnering support from writer/actor Simon Pegg and XFM DJ John Kennedy, and the two John’s let lose their second long(ish) player – about 25 minutes in duration for those wondering – ‘Out Here On The Fringes’ at the beginning of this month (October 2019) and it’s currently sitting at No.33 on the UK Vinyl Album Chart. No doubt those eager vinyl junkies have been snapping it up in glorious green vinyl.

Back at The Hope & Ruin and JOHN performed a 13 track set made up of the entire nine tracks of the new album, plus four tunes from their debut ‘God Speed In The National Limit’ album. The guys were certainly going for it as it was their first headline gig in Brighton and there were bucket loads of sweat being produced by both John’s, due to the amount of energy they were expending. They could be partially identified as a two-man IDLES, but I would suggest the vocals were more similar to the meaty bits produced by Hugh Cornwell during his Stranglers days, as well as Youth of Killing Joke’s shouty vocals on ‘Pssyche’. This indeed was a fair amount of noise being produced by two guys, but possibly slightly falling short of the SKiNNY MiLK levels.

The punters were best pleased by the JOHN performance, but to be honest I was still recovering from the previous bands lively performance……that being of Brighton’s very own DITZ, which is also always written in capitals. 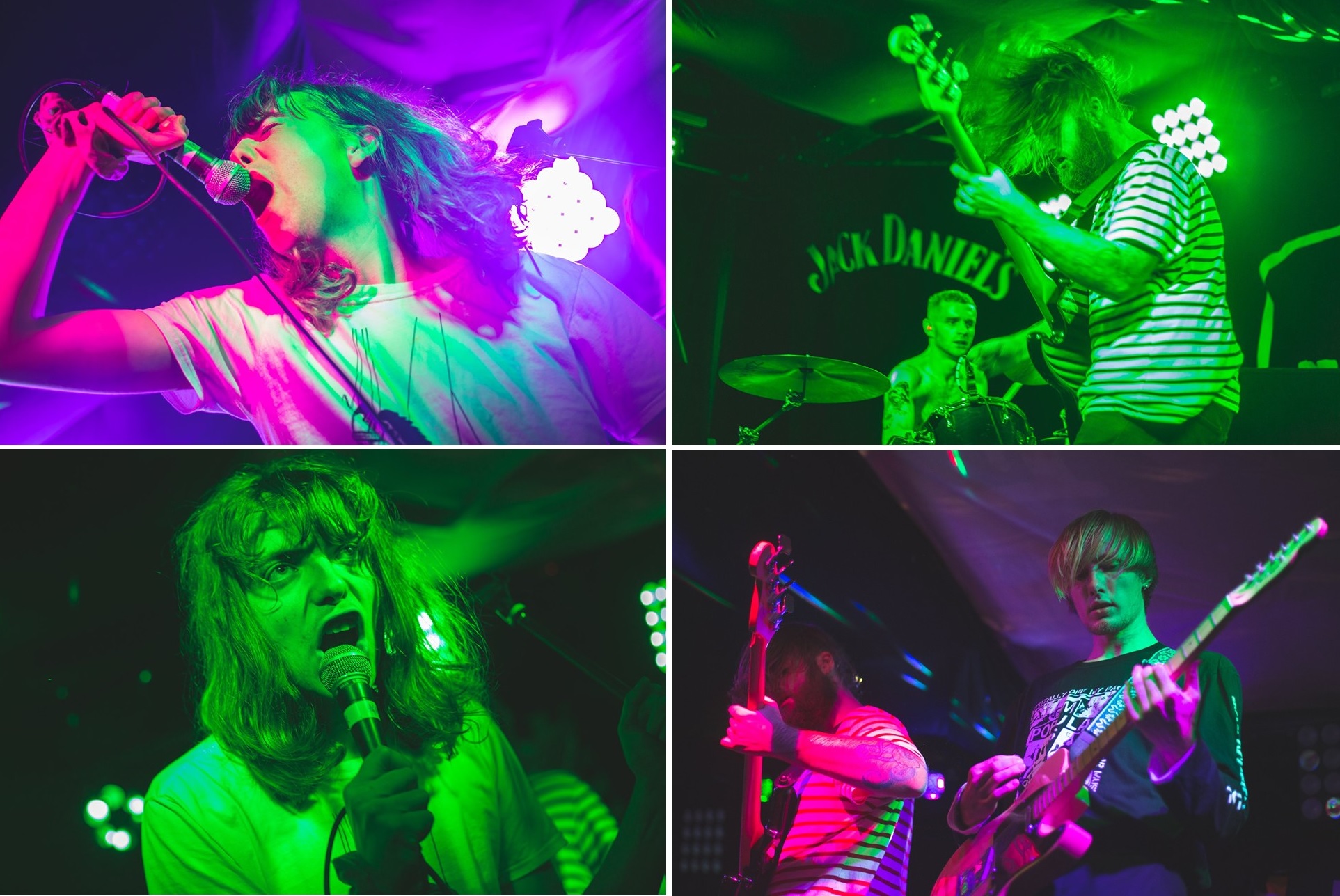 For me DITZ were the band of the night! I knew that they were going to be and I wasn’t let down at all, even with their recently reshuffled personnel. It was very much a case of Brighton & Hove Albion 1 – Crystal Palace 0…oh yeah, we weren’t going to mention the football were we, moving on…….

DITZ are now Cal on vocals, Anton on guitar, Caleb on bass, former drummer Jack now on guitar and new boy Sam on drums. Archie I guess has left for pastures new.

The first thing I notice is that Sam is really up for it and attacks his drum kit like there’s no tomorrow. He’s fighting with it and he’s winning! So this currently appears to be a positive step forward for the band, even though Cal informed the packed venue that they were sick of each other at the moment as they have been hauled up in the studio recording new material. I guess it can get like that sometimes, with having to play the same sections and songs over and over again and possibly one or more isn’t quite getting the drift. But I reckon those gathered wouldn’t have had a clue.

An amusing part was when Cal went for one of his jaunts into the crowd and decided to play “Here we go round the Mulberry Bush” with his mic lead, a pillar and a fan called Dinah. Cal has certainly taken up the Johnny Rotten ‘Master of the vacant stare award’ and accompanied by his sleepy punk slur delivery, it a fantastic frontman. The ‘noise rock’ music is as wonderful as ever and it’s a joy to see them play, although Anton refrained from throwing his instrument about this evening.

Over the past year I have been waxing lyrical about several guitar bands including IDLES, Fontaines DC, THUMPER and Rotten Foxes to name just four, and DITZ can certainly hold their own in this company. AF Gang et al, purchase your long sleeve DITZ T-shirts HERE. 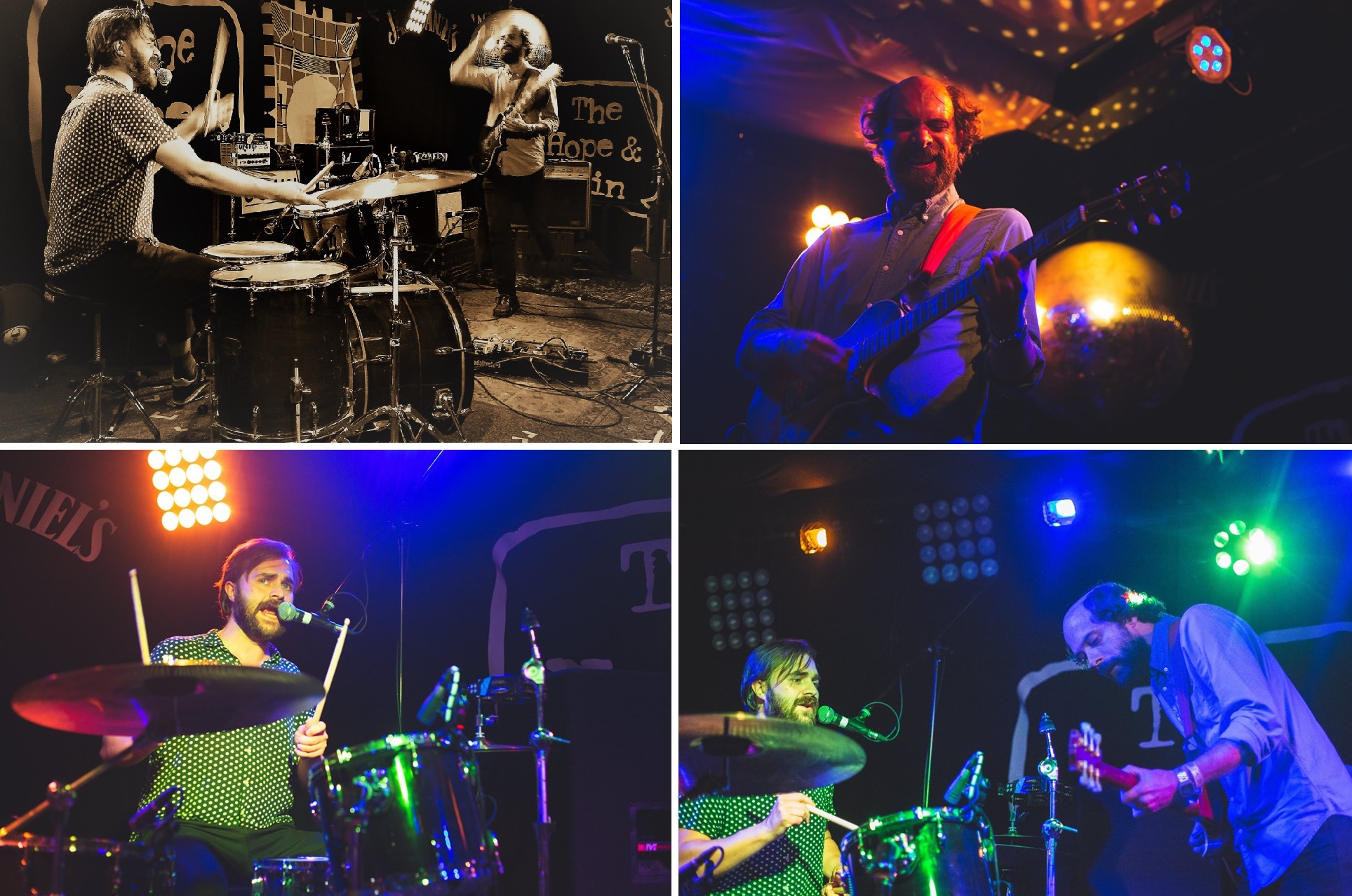 First up this evening were another duo, Chris Francombe (vocals/drums) and Mike Alvarez (guitar/vocals), who collectively are Frauds and are based in Croydon, and been plying their wares over the past seven years. This has given the guys time to perfect their ‘we don’t look heavy, but we sure are’ sound. Although more enjoyable for yours truly was their sense of Monty Python (as your parents) humour. They won over the already packed room with this and true to form punter J. Davies esq (of West Sussex, who had previously been present at Axis: Sova performance downstairs) obliged with his friendly banter that united crowd and artists as one.

Of note is Mike’s Max Wall (ask your grandparents) and John Otway (ask your parents) hairstyle, which I reckon adds to their edgy comedy element. Their powerful indie-rock performance went down rather well with the concert goers and I’m pretty sure that they have acquired a few extra fans along the way – eh Julien? For myself, I preferred their lighter moments as I needed cheering up having arrived inside the building a tad late, as I missed the performances downstairs.

Find them on Spotify and not the Comedy Channel.

Before I forget, grab your JOHN goodies HERE and check out their Soundcloud page and Bandcamp page. 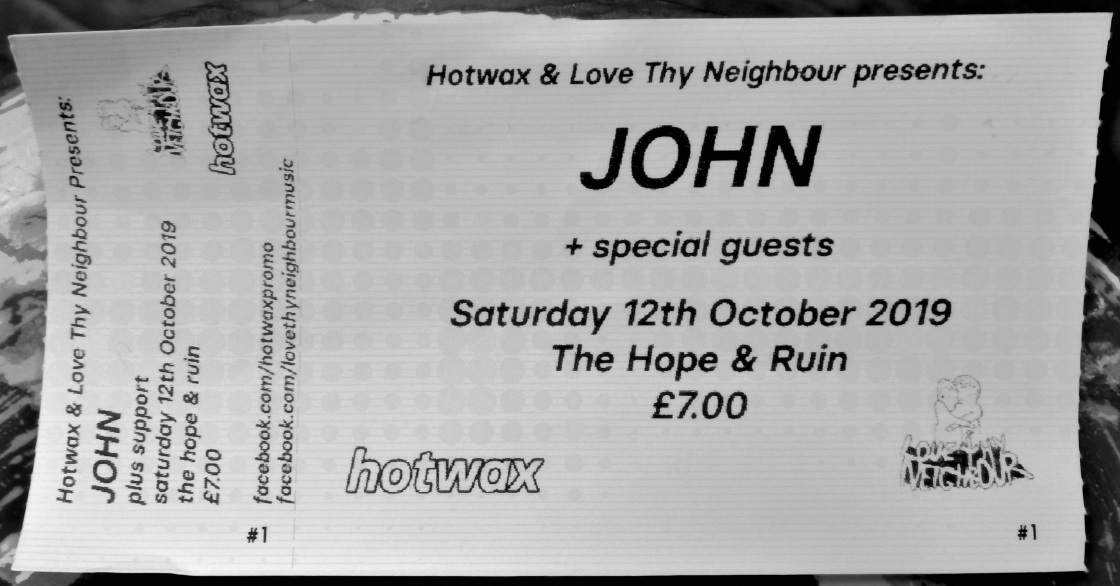 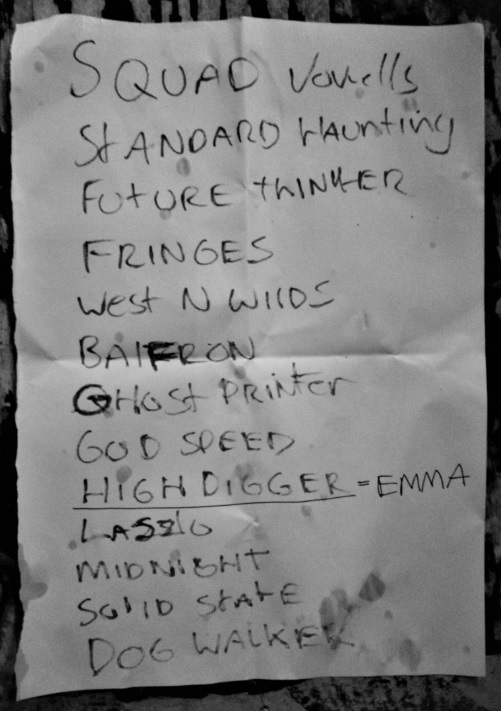