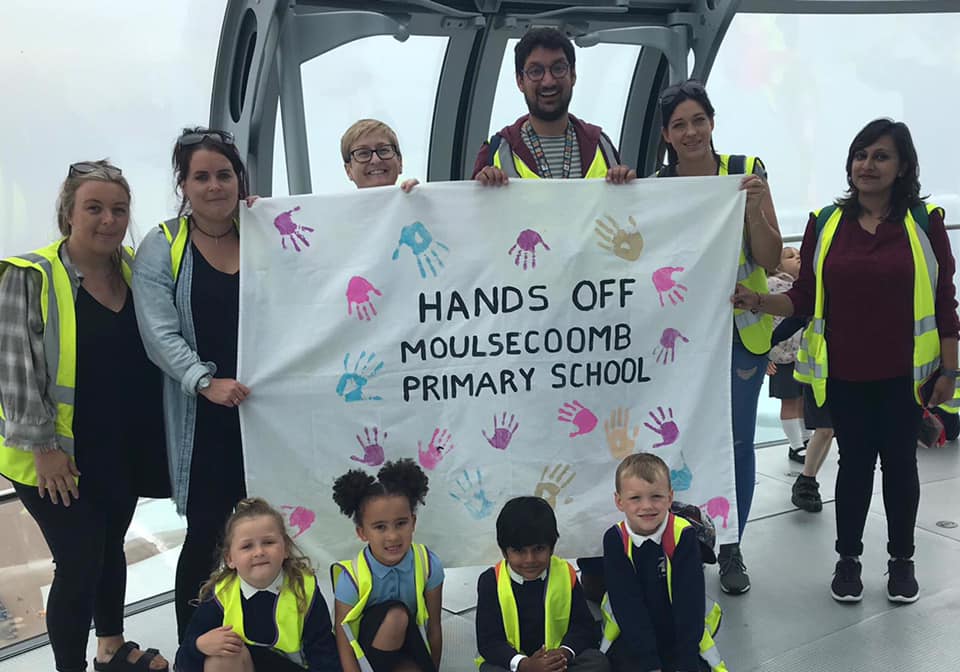 The sponsor chosen by the government to turn Moulsecoomb Primary into an academy had to give up a previous school after more than half the teaching staff quit within a year of it taking charge.

It previously took over Laurels Primary School in Worthing in September 2016 – but within months another academy trust had to step in to help and eventually took it over.

All three unions representing staff at the Moulsecoomb School started to ballot for strike action earlier this month, with the results expected to be announced in the next week or two.

Parent campaigner, Ulrike Hofmann, said: “We are shocked to find out that the academy trust that has been chosen to take over our school has a track record like this and will be given the responsibility of looking after our children’s education.

“Parents are extremely concerned and worried about decisions that are being made behind the scenes without any consultation of the community. I know several parents that have already stated they will take their children out of the school if this goes ahead.

“Our campaign group will be asking the trustees and members of NHAT to meet us urgently to discuss our concerns. More than ever we are determined to stop the privatisation of our community school.”

According to a trustees report included in DMAT’s most recently published annual accounts, four out of the seven class teachers plus the head quit the year after New Horizons took over in 2016.

The report said: “In June 2017, DMAT were contacted by the Regional Schools Commissioner to support the Laurels. The headteacher was leaving, as were four out of seven class teachers required for September, with no replacements as yet.

It was clear to DMAT that standards were poor, site security had been overlooked by the local authority, previous Head and New Horizons, and that the budget was out of control . . . Key Stage 2 had been greatly overlooked, and basic systems were not in place.”

The report said that New Horizons and DMAT worked together with [government] support through the autumn term in 2017, transferred to DMAT from January to August 2018.

A new head was appointed in January 2018 and, the report said, the school is making rapid progress.

Its latest Ofsted report, from February this year, said it requires improvement. The last report from the LEA-controlled school in 2014 rated it as good. 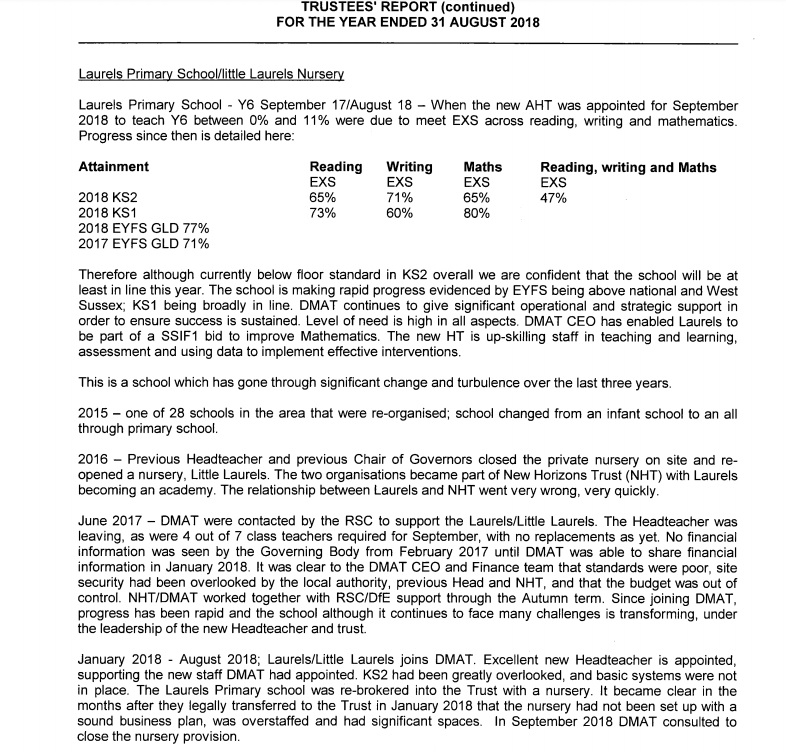 New Horizon Trust’s own accounts for the same period state: “The biggest significant risk for the trust moving forward is growth to enable effective economies of scale.

“With New horizons Laurels Primary having been re-brokered to another trust, this has a clear impact on the centrally provided trust services cost to the remaining school.

“New Horizons is working closely with the [government] to ensure that another school is identified for it to sponsor in the future.”

Craig Arden, National Education Union Regional Officer said: “It is a scandal that an academy trust with a track record of leaving a school in a financial mess, with staff leaving in droves and standards slipping, has been chosen to be the sponsor for Moulsecoomb Primary School.

“It appears that the main priority for the Regional Schools Commissioner in selecting NHAT to take over Moulsecoomb Primary is to prop up an unsustainable academy model and secure the trust’s financial viability.

“This is completely wrong and any decision that is made should be purely on the basis that it is in the best interests of Moulsecoomb Primary School and nothing else.

“There is absolutely no way that a trust with one school can provide better support than Brighton and Hove City Council which has 57.”

Paul Shellard, NEU Brighton and Hove Secretary said: “Everyone connected to Moulsecoomb Primary School is united in supporting the school as it continues on its journey of school improvement within the local authority. Parents, staff and the council do not want an academy trust with no connection to Brighton & Hove or Moulsecoomb, and little experience of running schools, to disrupt this progress.

“No amount of sweet talking by NHAT can conceal the fact that the academy model is flawed and unstainable. If Moulsecoomb Primary joins their trust, less money will be spent on children’s education and more will be spent on CEO wages and administration.

“Our members fear this will mean cuts to staff and rising class sizes and are prepared to use strike action to fight against this. We call on the sponsor to listen to the community and withdraw, and the Secretary of State to revoke the academy order.”