A Halloween horror made better by our NHS

This year I am celebrating Halloween without make up. I tumbled on our front steps putting the bins out and took a header into the uncompromising 200-year-old Sussex flint garden wall.

After my wife and son had mopped me up, with the help of my grandson, I went to A&E at the Royal Sussex County Hospital.

I immediately saw a triage nurse who cleaned the wounds, gave me painkillers and sent me for a head scan.

For a long time people have said I should have my head examined. At last I’ve had it done, and there was nothing physically wrong with it.

With my wife, I waited in the reception area to see a doctor. A&E was busy. Our wait was understandable and gave us an insight into some of the difficulties that the health team faces.

Several of the other casualties sitting and waiting were the walking wounded in every sense.

One agitated woman without money was trying to arrange a taxi to take her home, complaining constantly to the desk staff about her predicament and sleeping for long periods on one of the reception chairs. It wasn’t clear if she was at the hospital for treatment.

A chaotic and deeply troubled couple were sitting in the corridors arguing vehemently with themselves and the staff and wandering in and out, missing their call for treatment twice.

A man self-medicating with a can of cider had a friendly and enthusiastic conversation about the Batman films with a young man with learning difficulties.

Those with minor injuries came and went quickly, among them a tall and relieved young woman who limped out with a smile telling her friend that nothing was broken.

Two happy and noisy family parties passed through reception carrying flowers and pink boxes on their way to the maternity ward.

When it was my turn, a young and friendly doctor working a 3pm to midnight shift gave me a thorough examination.

“I can see your skull,” he said as he put five stitches in my scalp and glued a smaller wound together on my forehead. 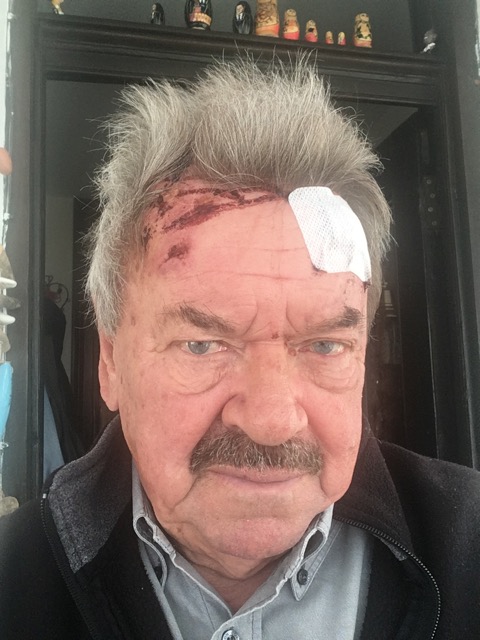 He took great pains examining my ribs, which had broken my fall on the stone steps. He sent me off for an x-ray because he was worried I might have internal bleeding. I was seen very quickly.

A man of about my age, who had tripped and banged his head on the pavement in the city centre, followed me to the x-ray machine.

A very old lady wrapped up in bedclothes on a hospital trolley was waiting alone and forlorn for her turn.

Ten minutes later and back in A&E the doctor told me my ribs were bruised but not broken and sent me home.

I came away immensely impressed and grateful to all the health professionals who looked after me so well and treated everybody patiently and politely.

It also reminded me that the NHS is constantly under threat from creeping privatisation. Its public sector future could be seriously threatened if a Brexit deal lets in money-grubbing US private health organisations, whose first thought is profit rather than patients.

We should never take the NHS for granted. We must all work hard to ensure it always remains “free at the point of use”.